Gone are the days when we had to endure the stories of how some undersized defensive tackle was an example of effort and leverage, while watching other teams trot out 330 lb space eaters that bounced our RBs off their bellies. You can’t teach 330 lbs. We now have Colin Cole, who weighs at least that and Red Bryant who weighs in over 320 lbs. Along with the addition of Cory Redding at DE, we now sport one of the heaviest defensive lines in the NFL. Combining that with a supremely talented linebacking crew and willing safeties, and we should be much improved against the run. This has proven almost impossible to predict in past seasons, especially based on pre-season results. The personnel is there. Success in this area will likely come down to discipline and tackling.

Marcus Trufant is out for at least the first six games. He is the best player in our secondary, and making due while he is gone will be difficult. As everyone knows, good pass defense is largely dependent on a good pass rush. Without having seen Gus Bradley call a defense in the regular season, we’re left to our imaginations as far as blitzes. We also don’t know how Aaron Curry will impact this aspect of the game. Outside of Josh Wilson, the talent is there. My instincts lead me to believe this could be a disruptive, hard-hitting, turnover-creating crew. 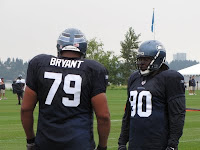 We certainly have enough of them. Eleven, to be exact. This is the deepest unit on the team. I would be comfortable with nine of the 11 getting extended playing time. Lawrence Jackson and Derek Walker are passable, but not strong. Every other player is either already an established high performer, or has a high ceiling. The key to this units success will be Brandon Mebane and Patrick Kerney. If those two can combine for 15+ sacks, things are going our way. Don’t be surprised if pre-season wunderkinds Nick Reed and Michael Bennett make an impact as rookies. We may also see new life in Darryl Tapp, who is going to be used in some more creative ways to rush the passer. The sheer size of this group may leave them vulnerable to quicker backs that can hit the corner, so our linebackers really need to earn their enormous paychecks.

The best linebackers in the NFL, right? Young, talented, versatile and…disappointing? Lofa Tatupu and LeRoy Hill burst onto the scene during their 2005 rookie campaigns. I’m not sure I can say either of them is a clearly better player now than they were then. Neither of them have come close to matching their rookie sack levels. Lofa’s once-dependable tackling has become spotty. There are fewer moments where you see him diagnose a play before the snap and meet the runner in the backfield. We have added a major talent in Aaron Curry to the mix, who has to be more assignment-correct than the notorious freelancer he replaced (Julian Peterson). This defense is being designed with these three guys in mind. They need to earn the reputation that precedes them. If even two of them play at a Pro Bowl-level, the defense could be special.

Backups here are young and inexperienced. There is a huge dropoff from a guy like LeRoy Hill or Aaron Curry to Will Herring. Same thing with Lofa to David Hawthorne. They are capable in spot duty, but are not ready to carry the load for any real length of time. 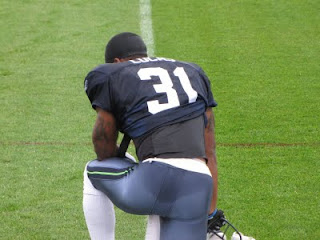 Trufant’s absence really hurts here. Pairing Tru with Lucas would have given the Seahawks the strongest CB tandem since…well…Trufant and Lucas in 2004. Instead, we get Josh Wilson who is far more confident than his play merits. He can be a daring playmaker and willing run supporter, but often takes chances and gets beat deep. He is not strong at shedding blocks, which can lead to long runs around the edges. He is strongest in the slot, but with him starting, that role now falls to Kelly Jennings. Jennings came into last season as the starter, but was burned so often, he lost the role quickly. He is paper thin, and struggles against the run and against larger receivers. Our safety trio of Babineaux, Milloy and Grant is promising. There is a nice mix of run support, coverage ability, tackling and experience in that group.

Position-for-position, the defense is stronger than the offense, both in starters and in depth. The head coach is a defensive guy. The defensive coordinator is being hailed as a future star. The defensive line coach was in line to be the defensive coordinator. If we can’t put it together this season, than “screw you guys, I’m going home.” All I want to see is dependable tackling and successful pressure packages. No more excuses. It’s time for this group to win some games all by itself.

Kicking and punting seem to be in good hands. Coverage and kick return teams should be adequate to good. This team needs a special teams unit that can just do its job. Cut down or eliminate as many negative plays as possible. Help with the field position game. That should suffice.

Mike Singletary is a mean man. He has been doing his best to breed a team of mean men down in SF. Their offense is limited, but their defense could be good. A surprise run at the division crown is not totally out of the question, but third place seems far more likely. Beating them in week two is key.

Thank you NFL for letting us open with them at home. Thank you. Anything outside of the cellar would be a shock.

I was among the few who predicted the Cardinals could threaten for the division title last season and would likely make the playoffs. The popular opinion right now is that they were a one-hit wonder and will suffer the Super Bowl-loser slump. I don’t see where this team got weaker, and now they have eliminated their biggest obstacle, self-doubt. I expect the Cards to be battling the Hawks all year for the division title.

Prediction: I expect the Seahawks to win the division and make it to at least the second round of the playoffs. Their defense needs to be special and their offensive line needs to be above average in order to do more than that. The confidence emanating from the team is palpable. Getting out of the gates fast will be crucial given the tough post-bye week schedule. There are six of the infamous 10 AM starts in there. You will know exactly what kind of team we have by week four after playing the Bears at home and the Colts on the road. No matter the outcome, I plan to enjoy watching the twilight of Matt’s career.