True Northwesterners know how to take advantage of decent weather. After my oldest son’s soccer game, I rushed home and packed my youngest into the bike trailer and took off for a long ride, in part, so I could listen to some Seahawks podcasts. The ride finished just before the rain came, but not before my youngest exited the trailer and vomited all over our front door. Maybe I should listen to smooth jazz the next time I ride with him in the back.

Anyway, John Clayton was my podcast of choice yesterday. He had a Denver writer on that covers the Broncos, and they spent a fair amount of time talking about the Broncos offensive line. I knew earlier that it was a mess, but wow. Listening to this guy while imagining our defensive line got me salivating. Take a look: 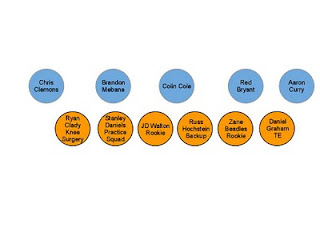 It is not that uncommon to have a weakness somewhere along your line. What gets really challenging is having multiple weaknesses playing next to each other. In the case of the Broncos, their only truly talented lineman is LT Ryan Clady, who is coming off of major knee surgery and only started practicing in time for the last pre-season game. His left guard, Stanley Daniels, has been on the practice squad of three teams in three years. JD Walton is a rookie center. Russ Hochstein is a backup playing at right guard unless Chris Kuper can come back from injury today. Zane Beadles is another rookie that had a critical holding call last week. Oh, and just for good measure, TE Daniel Graham is also coming off a tough injury during the pre-season. If there was ever a game for Aaron Curry to break out, this is it.

If the Seahawks are to win this game on the road, at least one player along our defensive line must dominate.