Search
Home
Uncategorized
The news broke today that Sidney Rice is heading to the injured reserve. His season is over. With two concussions in the past three games on non-contact plays, the Seahawks made a prudent decision to shut him down and make sure he can be a productive part of the future instead of risking his health (and their investment) on a series of largely meaningless games this season. Some fans are reacting to the news as if this is just the latest in a series of failed free agent moves by the Seahawks. Rice’s health is certainly a concern, but his production in a pedestrian offense merits more than enough excitement to offset those concerns. 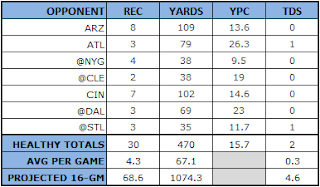 Rice missed the first two games of the year with a torn labrum. He never healed, but was able to rehab to the point where he could play. John Carlson also tore his labrum, but the injury was severe enough to end his season before it began. Rice missed much of the Baltimore and Redskins games with concussions caused by having his head smack the turf on diving attempts. In his seven “healthy” games, Rice totaled 30 receptions and 470 yards for a per-game average of 4.3 receptions and 67.1 yards. That adds up to about 69 receptions and nearly 1,100 yards when projected over a whole 16-game schedule. That’s far from bust territory. Rice is still only 25, and while he missed most of last season, it was for a hip injury that has no relation to the injuries he has endured in 2011.

Percy Harvin had multiple concussions to the point of having some discuss whether they would threaten his career. He has played every game this year and 14 of 16 games last year. Fans need to avoid going overboard with worry regarding Rice’s situation. He is a long and thin player who regularly extends himself for throws over his head and wide of his body. Injuries will likely always be a threat with him, but so will 60-yard touchdowns. All Rice has done this year is give the team hope that they have found a truly productive member of the receiving corps for years to come.