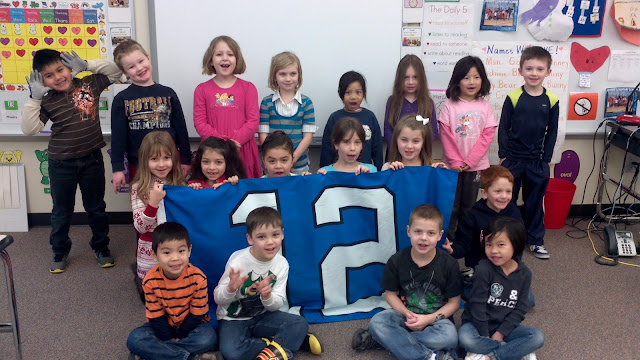 Dana Lowy’s 1st Grade class is a special place. Not only is Ms. Lowy an award-winning teacher, but she has the privilege of nurturing a classroom full of rabid Seahawks fans. They welcomed me in this morning to talk about my job, since my son, Nate, is Prince of the Week. We talked for a bit about my real job, and then had a lot more fun talking about my favorite blogging hobby.

There was more than one Matt Hasselbeck fan in the group, and even a Shaun Alexander supporter. They were all thrilled to know that they, too, were The 12th Man. Learning that reading, writing, math, and spelling were important parts of blogging was predictably a little less exciting.

It was a special day for Nate, who has special needs. He is not able to do everything his classmates do, but tries his best, and still gets to have his Dad come in for a visit. When Nate started school, he was in the special ed program. After a lot of discussion at home, and with the school district, we decided to integrate him into the mainstream. There was a lot of debate about what was best for him, for his classmates, for the schools, for the teachers. Our worst fear as parents was that Nate would be treated poorly or that he would hinder the students around him. It has been nothing short of miraculous to see the community, teachers, students and school district form around him.

It’s never that easy, of course, and the amount of work teachers like Ms. Lowy put in to make an inclusive classroom is not lost on Nate’s parents. The kids deserve all sorts of credit for treating Nate with respect. Mr. H (Henry) is Nate’s aid, and is arguably the best one in the world! And, of course, Nate deserves a bunch of love for being a courageous little kid in what is sometimes a strange world to him.

It is no wonder that such a remarkable group of people are big Seahawks fans. Go Hawks!