Search
Home
Uncategorized
Branton Sherman has designed a t-shirt to have a little fun with his brother, Richard’s appearance on ESPN First Take when he famously told Skip Bayless that he was “better at life than you.” Harsh? Yes. Funny? Absolutely.

I decided a short while later that this phrase deserved it’s own hashtag on Twitter:

This may need to be a trend on Twitter. Better At Life Than You = #BALTY
— Brian Nemhauser (@hawkblogger) March 8, 2013

Branton is now offering to t-shirts to interested fans. You can find the ad for the shirt on Hawkblogger.com, which will shoot an email to Branton. This email address was created exclusively for t-shirt ordering. It is not his personal address.

Click the image below to order a t-shirt and be #BALTY! 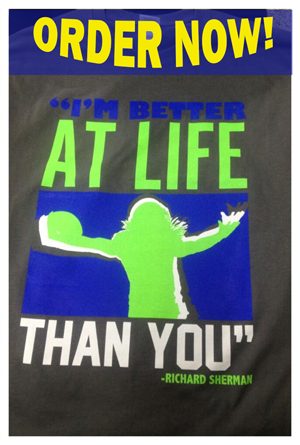