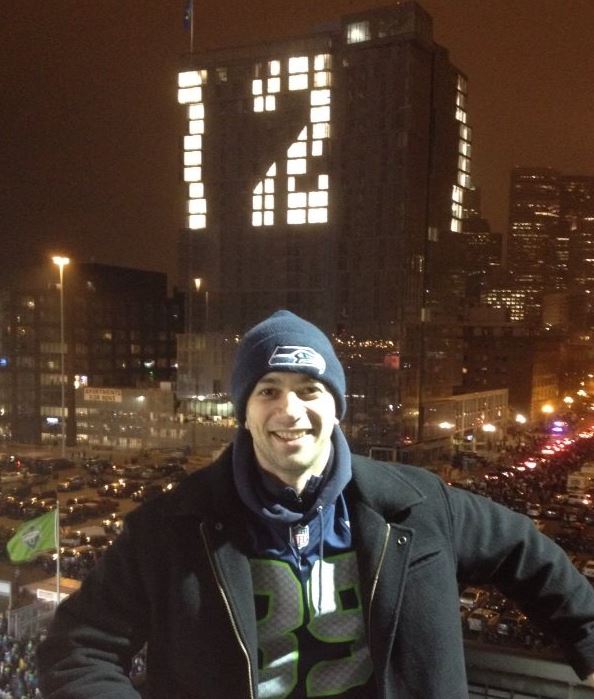 
It is Friday morning, two days since my last journal entry. A good friend asked me last night on Twitter if I was in heaven. Two days of walking the streets of New York City, eating great food, meeting new people, doing fun things, and it all is building toward a day of days on Sunday. This is the time of my life. And I don’t think I am alone.

Seahawks fans are multiplying. The mix of Denver-to-Seattle fans started out as roughly even when we arrived on Tuesday. By last night, the count of Seahawks fans was clearly rising with many more due in today and tomorrow. This will not be like Detroit in 2006 when the Steelers fans overwhelmed the Super Bowl. 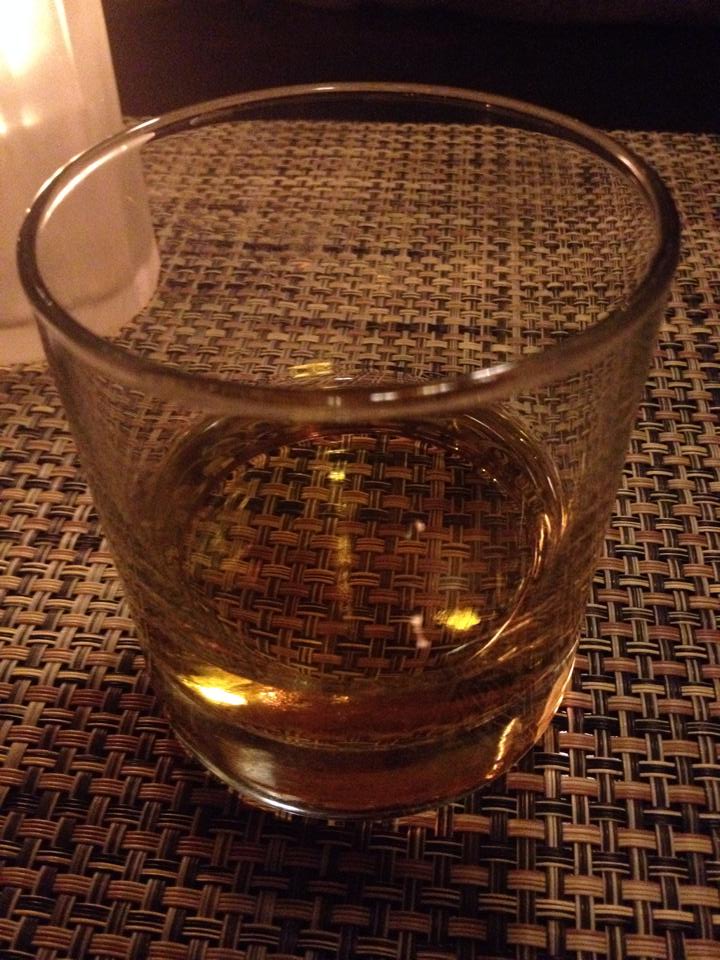 We met up with a friend, Shane, from Twitter last night at one of the countless Irish bars around Times Square. The Playwright Tavern off of 49th was a good spot to grab a whiskey and chat about the game. By the time Shane’s friends arrived, Aron and I were off to see if we could see the Empire State Building in blue and green. We thought it would be cool to go to the top while it was bathed in Seahawks goodness and get some photos.

As we began our trek down town, we noticed more Seahawks fans than the previous two nights. It is, of course, our habit to give a casual, “Go Hawks,” as we see anyone wearing Seahawks gear. We get about a 90% reciprocation rate, and about a 50% “who the hell are these people?” rate for New Yorkers wondering what just happened as they walk near and around us.

The closer you get to Times Square, the more models you see. Aron and I have started a game similar to slug bug whenever we see one. Not surprisingly, we stick to female model sighting. Anyone who has seen an episode of America’s Next Top Model (raises hand), remembers when the models were given the challenge to run between go-sees in Manhattan. These woman often have that look of either carrying the makeup from their last shoot on their face or stripped down to bare skin (on their face, fellas) for their next shoot while scurrying as quickly as their long legs will take them. We saw an impossibly beautiful French model at The Book of Mormon on Wednesday night.

The musical was fantastic. Trey Parker and Matt Stone have a gift for taking on sensitive issues with complete insensitivity, and finding a way to make you laugh, think, and cringe. Aron and I hit a restaurant/bar called Lillies across the street from the Eugene O’Neill theatre where we saw the play. I highly recommend it. I got the steak and the asparagus and sampled some whiskey. The setting was unique and fun.

Aron and I have shared season tickets for over ten years. I bought mine in 1997 after moving to Seattle, and Aron and I became friends through work a few years later. We are a perfect game day team as we both have a nearly limitless thirst for debate and alcohol. We alternated between marveling over the French model who we were having trouble believing was a real person and not some perfectly designed fembot shrouded in angel’s skin, and a philosophic debate over the role of religion in society. And, of course, the Seahawks. Aron was taking the stance that the world would be better off in the long-term without religion. He was making the point that basing our beliefs on science and progress would be best for a human race that will need to one day figure out how to survive a species-ending calamity that history shows is an eventuality for Earth. I don’t completely disagree, but I like a good debate and took the stance that Book of Mormon was espousing, which was that even if all religions are based on complete fabrications (e.g., golden plates buried in the United States, walking on water, etc.), it does not matter as long as the result brings together large groups of people to live better lives and be better people. I am not a particularly religious person, but I love being part of a community with shared history and beliefs. I respect everyone’s belief system, as long as it allows for tolerance and diversity. Aron and I drank, ate, philosophized, and objectified until after midnight. Good times. Good friend.

Back to our walk toward the Empire State Building. We crossed through Times Square, and saw Tony Siragusa posing with a couple of Seahawks fans before ducking into his hotel around 10PM. A few steps more, and I saw a few familiar faces. Aaron Levine, from Q13 FOX in Seattle, was shooting conversation with Ian Furness of KJR, Dave Wyman of 710 ESPN, and Mack Strong. It is fun seeing local news folks walking the streets and giving them a little, “Go Hawks,” as well. They have to feel overwhelmed here, and big-timed, as New York and national media treat local, smaller-market news people the way the FBI treats local law enforcement. There is a camaraderie among all the Seattle folks here. We are all being underestimated. We are all looking forward to ripping respect out of their arrogant, uninformed hands in just a couple more days. 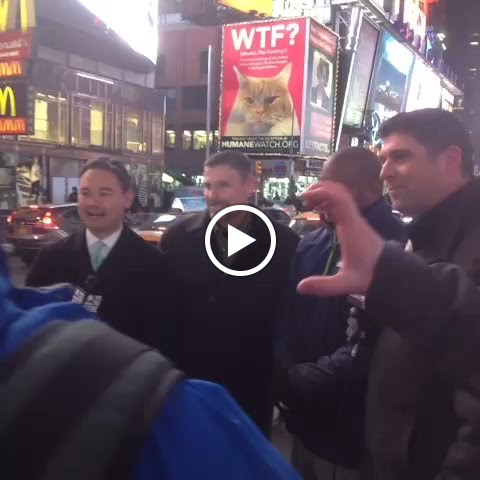 Aaron was particularly gracious, and complimented the blog. Some local media see what I do as a direct assault on their profession and livelihood. I can understand that. I also know that people that do good work have nothing to fear. Guys like Mike Sando, Danny O’Neil, Jerry Brewer, and more take their craft seriously and add to the overall conversation. Those that are mailing it in, and they know who they are, should fear people who write for the love of the topic they are exploring. Your credentials will not save you. Only good work. Levine is one of the good ones, and I know people on the team appreciate his work.
We kept walking and caught a glimpse of the Empire State Building bathed in light. Red light. What the fuck? The Seahawks fans won the daily #WhosGonnaWin contest that day, so it should have been green and blue. Aron and I ducked inside a Verizon tent nearby, since they sponsored the contest, and asked what was going on. They informed us the winning team only gets an hour of their colors up there. That is insane. What possible benefit is there to having colors not relevant to either team? Dumb.
We decided to grab some dinner at our usual East Coast time of 10PM. It is always easy to find a great spot to eat no matter where you are in New York. We went for Italian again, and started to plan out our Friday. Softy had texted me earlier, asking/demanding that I come by the Croton Tavern Friday night from 6-9 PM to jump on the broadcast with him. I wasn’t sure our schedules would align this week, but I’m glad they did. We also are hopping from our hotel in Times Square to a friend’s apartment in mid-town, West of Central Park. We may check out the Natural History Museum if time allows, and might swing by Carlow East for the Blue Friday rally.
I have seen what we all came here for. I have stood next to it. It calls to us. It’s attraction is stronger than any French model. Although, that may be worth a debate over drinks today. The people of New York and New Jersey have been fantastic. They love sports like few areas of the country do. They love it so much, they will talk endlessly about a football game they do not have a team in. They are genuinely excited to see people from Seattle visiting their city. We find connections, like John Idzik taking over the Jets, and Pete Carroll taking over the Seahawks. We make super-sized predictions about the game, and laugh, knowing we will never see each other after to collect our due. They want to hear just how loud it is in CenturyLink Field. They want to know what Richard Sherman is really like. They mostly cannot help but think Peyton Manning has the edge, but they admit to not really knowing. They will learn. Two more days.