In case you missed the write-up on the defense, be sure to check it out here. It is time to see where Percy Harvin and the offense are after a week of free agency.


I used a ProFootballFocus.com blog post from 2013 about personnel groupings to find the offensive packages the Seahawks use most. The top two are represented in this post, and should account for nearly all the personnel the Seahawks could use in any formation. The only difference might be who the fourth receiver is or who the third tight end is, but the names are largely the same. 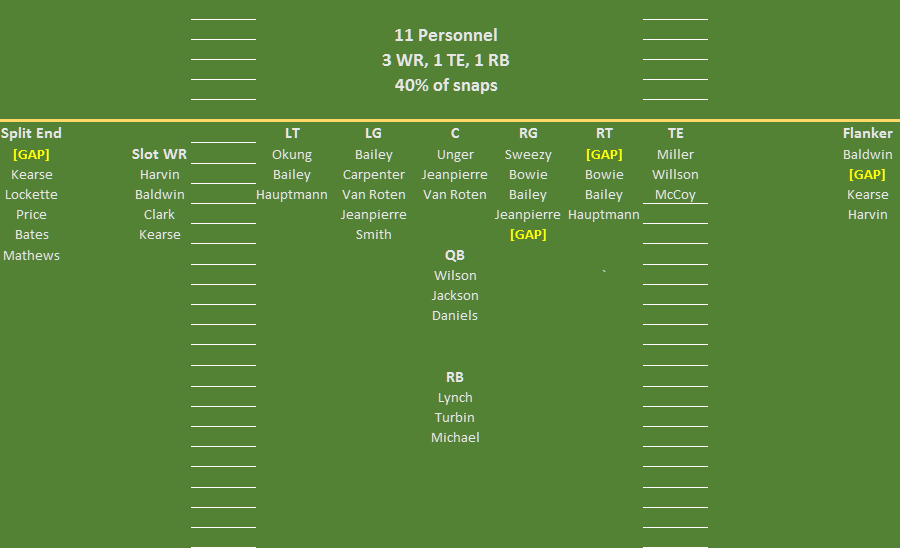 Creating a depth chart for the offense is tough right now, especially at the receiver and offensive line groups. Seattle has a formidable starting eleven, even if they make no more additions. A player like Harvin has not been used enough to know all the ways the team will line him up. Players like Michael Bowie and Alvin Bailey are so ultra-versatile and came on so fast last year, that either of them could start at three different positions on the line if the coaches wanted to go that direction. Greg Van Roten was signed from the Packers, and could be the new Paul McQuistan, or could be on the wrong side of cuts in training camp. One thing that is very clear is that the versatility on the offensive line has been among the most brilliant coaching maneuvers thus far.
Having nearly ever player cross-trained at multiple line positions creates extra depth and buffers the impact of injury. The line, though, never found the five best players last year; a remarkable fact given the results. We do not know yet what the team has in Caylin Hauptmann. They carried him on the 53-man roster almost all year, so they think highly of him. He is young, and looks athletic. Maybe he is the tackle depth the team needs. Maybe he’s off the team before the regular season. The team usually carries 10 offensive lineman, and currently has 10 on the roster. Smith was a practice squad guy, so make it nine. James Carpenter is in his final season, could even be a cap casualty if the team decides the money is spent better elsewhere. Either way, they will add to the line via the draft. They might even take two lineman. If they find a very cheap veteran who they like, they may grab someone there.
I expect Michael Bowie or Alvin Bailey to start at right tackle, likely Bowie, but it will be an open competition. It would make sense to add another promising young tackle in the draft to fortify that spot.
The receiver situation is a little more straight-forward. Baldwin, Kearse and Harvin are worthy of major roles in the offense. It is logical to expect Kearse to get Golden Tate’s old job at split end. He is bigger than Tate, high-points the ball like Tate, and is a better separation receiver. Still, I put a “gap” at the starting split end spot because I believe it will be an open competition between Kearse, a draft pick, and possibly a veteran free agent. May the best man win. And if that man is better than Kearse, and you add Harvin, the Seahawks receiving corps will be significantly better than it was last year. 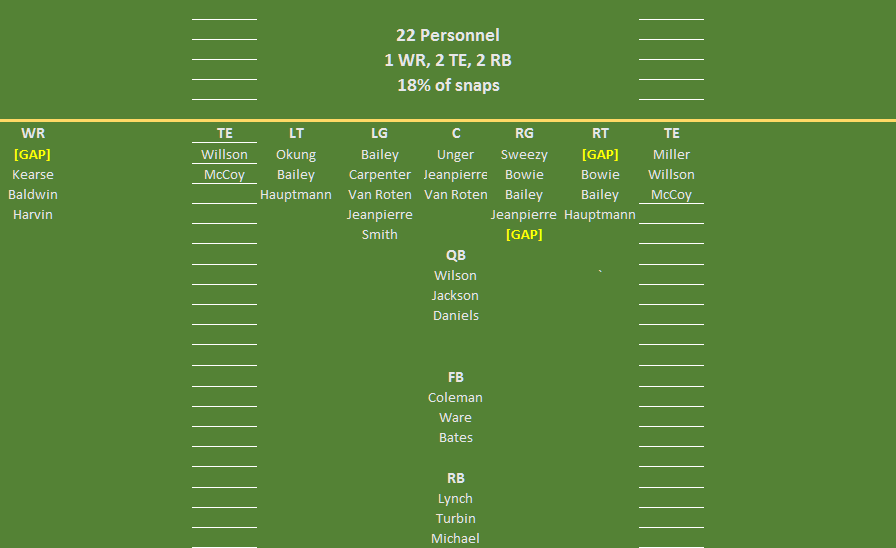 Seattle runs the ball…a lot. That makes their two and three tight end sets important, as well as their 22 personnel that includes a fullback or H-back (a tight end that lines up in the back-field like a fullback). The tight end position is already improved from where it was last year. McCoy is a big upgrade over Kellen Davis. The team also started using Bailey in heavy packages as an extra eligible receiver. Miller now is likely to play in Seattle both this season and next. The team could draft another young tight end, but there is absolutely no need for them to.

There has been talk of signing Jermichael Finley, but I don’t believe that was ever a tight end play. My guess is Seattle is considering Finley as a potential part of the split end wide receiver competition. They probably look at Sidney Rice and Finley as big receivers with high upsides, who are cheap due to serious injury concerns. Do not be surprised if Schneider picks one of the two, knowing he could cut them in camp if things do not pan out.

Running back is also in great shape. The team could consider adding Michael Robinson again if they are not happy with Derrick Coleman, but there is also Spencer Ware to consider, and a possible long shot in Robert Turbin converting to a fullback.

Carroll is already on record as saying Michael is his pick as a breakout player for next year. This offense with Harvin and Michael involved will be twice as explosive as it was at any time last year.

Just like the defense, all of those could already be on the roster. Kearse is the odds-on favorite to be the starting split end. Bowie is the favorite to win the right tackle spot. Bailey, Bowie or Carpenter are close to certain to start at left guard. Just adding Harvin and Michael to the mix could change the whole dynamic. A whole season with that heavy package featuring an extra lineman will change things. Another year of growth from Wilson will lead to improvement. Knowing how many quality receivers are in this draft makes me confident the team could add yet another impact playmaker to the fold. There is so much focus on the defections from the defense that people may not realize this could be one of the top three scoring offenses in football next year.