Search
Home
Advanced Stats
The Treaty of Versailles ended World War I, and required six months of negotiations. The future of nations and millions of their citizens was at stake. It takes four months for Major League Baseball to negotiate their schedule. The NFL takes over two months to agree on theirs. Time and sacrifice will always be required for a group of people to agree on something where each has an enormous vested interest. Leverage becomes a prized commodity. A truly good compromise is struck when nobody is happy, but those with more leverage usually leave a bit happier than the rest. The NFL released their 2014 schedule on Wednesday comprised of thirty-two teams playing 20 games each, spanning six months and over 20% of the Earth’s circumference. This logistical nightmare was the responsibility of mere mortals not so long ago, but billions of dollars in television rights has mechanized the process. Even with some of the sharpest mathematical minds and plenty of hardware horsepower, the result is never perfect. 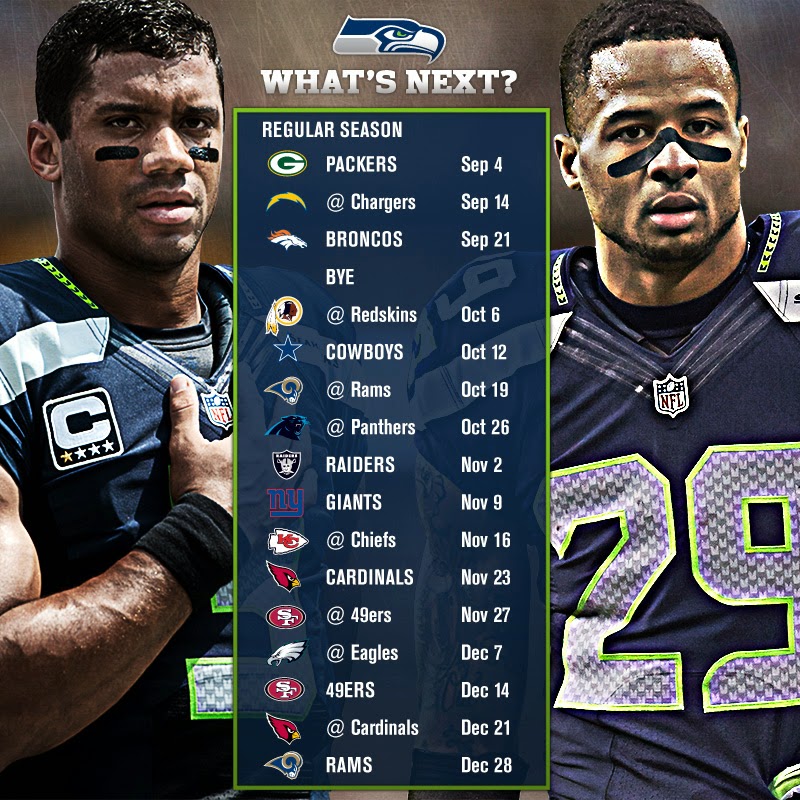 “The first day [that the schedule is released] we get the gut reaction from people,” Mike North, Sr. Director of the NFL Broadcast Schedule said. “It is the next day we hold our breath for someone finding a problem we missed.”

Seahawks fans surely noticed the week four bye in the team’s schedule. Early bye weeks are considered a significant disadvantage in a league where attrition is as much the enemy as any team. Getting a rest when your team is fresh is a lot less valuable than getting one later when battered bodies need to mend. The reaction from Seahawks fans was universally negative about that part of the schedule, and many wondered aloud if the NFL was intentionally making it tougher on their team to repeat as champions. The truth is much less sinister.

North explained that the logic behind the NFL schedule is simple, even if the process is arduous. There are hard constraints—like playing eight games at home and eight games on the road for each team—that must must be satisfied, and there are soft constraints that read more like a Christmas wish list (e.g., the Patriots ideally play on Monday Night Football in the first month of the season). Then, there are penalties. Penalties, in this context, are negative situations the league would like to avoid. Their goal is a level playing field, so they seek to minimize schedule advantages and disadvantages wherever possible. Playing three consecutive road games is tough. Doing that from Seattle with two East Coast trips included is really tough. North, and the team he works with, assign penalty points to each negative situation they identify. That Seattle road stretch would be assigned a much higher penalty point value than a team centrally located. The list of penalties is vast, and spans seasons.

Seahawks fans will be pleased to know their frustration over a week four bye is well-founded. There are penalty points assigned to an early bye. But those points can vary depending on when the last time was the team had a bye that early. In Seattle’s case, their last week four bye came in 2008.

Every team must take their turn experiencing that pain in order for the schedule to be fair across seasons, not just the current one.

It is not, however, just about fairness. Billions of dollars in broadcast rights for MNF, Sunday Night Football, and now Thursday Night Football complicate matters. Each of those broadcast partners, along with those who own the bread-and-butter Sunday standard game slots, have their wish lists and a lot of gold-plated leverage. The perfect schedule would balance the needs of the broadcast partners with the needs of the teams for schedule equity. There is no perfect schedule, but the league busts it tail trying to find one.

George Nemhauser is a professor at Georgia Tech in the School of Industrial and Systems Engineering. He is an expert in the field of discrete optimization, which is a hot commodity in the mostly hidden field of complex scheduling. Companies from major airlines like Delta, American and United to General Motors have hired Nemhauser to assist them in schedule optimization. His path into sports scheduling was one of serendipity.
Nemhauser had been teaching at Cornell but got tired of the weather, and so he accepted a position at Georgia Tech in 1985. He led the typical life of a college professor until 1990, when he was elected to represent Georgia Tech athletics as a faculty representative. The role requires a person to act as a liaison between the school, the conference and the NCAA.
“If you’re a sports fan,” Nemhauser explained. “It’s lots and lots of fun.”
He had the pleasure of playing tennis with Mike Krzyzewski on multiple occasions. It was a side job with perks. Then, one year, he was sitting in an ACC meeting and the associate commissioner of basketball operations mentioned he was starting to have trouble making up the schedule. He had spent a decade doing the work, but the increasing complexity was giving him fits. Television rights and requests, again, were the major complicating factor. Nemhauser had been working with airlines on their scheduling at the time, and thought he could pitch in.
“Hey, maybe I could take a shot at doing this,” Nemhauser remembered.
He brought some science to what was a manual process at the time. Other conferences started to learn of his prowess and soon Nemhauser was scheduling for the SEC as well. It soon required additional help, and so Nemhauser reached out to a professor he knew at Carnegie Mellon, Michael Trick, to assist. In a twist of fate, Doug Bureman, a MLB executive for the Pittsburgh Pirates was taking one of Trick’s classes and found him afterwards to suggest they see what could be done for baseball scheduling. Bureman, Trick and Nemhauser formed The Sports Scheduling Group (SSG).
Bureman explained that an elderly couple from Staten Island had been responsible for MLB scheduling for decades.
“They had this huge wall magnetized,” Nemhauser said. “They would move magnets around the wall, and they were incredibly good at it.”
SSG did a few prototypes for MLB.
“We struggled to do the quality of schedules that they produced.”
Then, inter-league play entered the picture. SSG won the MLB contract in 2004, and still handles their scheduling, along with most of the major NCAA conferences. Not everyone was thrilled about the change.
“Sports computer nerds steal from old people,” Nemhauser said. “I think that was the story.”

The process that Nemhauser pioneered is what North and the NFL utilize. The scheduling optimization fraternity is small. North knows Nemhauser, even though SSG did not win the NFL contract. That prize went to a company called Gurobi. Their Director of Engineering is Gregory Glockner, a former student of Nemhauser’s.
North explained that the NFL process was not so dissimilar to what the elderly couple had been doing for MLB.
“The stakes were not as high,” North said. “Anyone could pick out the fifteen best games and use a magnetic board or an Excel spreadsheet to assign them. We would figure out where those games needed to be broadcast, and then build the schedule around it.”
Over the last fifteen years, they have worked with a company called Optimal Planning Solutions to think like they think. They identify pools of games that can go on Monday Night Football, and assign hard constraints (e.g., three Dallas, three Green Bay, etc.). They do the same for Sunday Night Football and now Thursday Night Football. They need to leave meaningful games for their standard Sunday time slots. They assign penalty points for situations they want to avoid, and then try to find a schedule with the fewest penalty points. That is where the computers and math comes in.
“You are talking about billions upon billions of alternatives,” Nemhauser said. “How do you find the best without looking at them all?”
They feed their list of hard and soft constraints into the system, and let the computers generate alternatives. For a MLB schedule that includes a 162-game season, that process can take days. It is generally hours or overnight for the NFL. The schedules the computer spits out is never perfect. They identify the problems and think about what would be needed to fix it. Penalty points are adjusted, and the process is kicked off again.
“It used to be that we would hand one schedule to the commish,” North said. “Now, we go through thousands, even hundreds of thousands of permutations that factor in our constraints.”

The process starts the day after the Super Bowl when they know everything they need to know, all the way down to the stadium tour dates of One Direction.
It ends sometime in mid-April. At any point in time, there is a “leader in the clubhouse,” schedule that is pinned to the wall. Every day from the Super Bowl until the schedule is announced, North and his colleagues try to beat it.
An interesting aspect of this year’s schedule is the 33 divisional games that occur in the last three weeks of the season. It has the feel of college football where teams play their non-conference schedule up-front. If it does not go well, fans can expect penalty points to be allocated differently next year.
Some will tell you that the NFL schedule is so complex that there is no way the league really cares about the Seahawks travel schedule or when their bye week falls. It is easy to be cynical and assume that the television money completely drives the process. The reality is that the league is more aware of these factors than most realize, and works each year to improve their process to balance fairness for the teams and fairness for their broadcast partners. It is an imperfect process, but it is hard to argue the results.