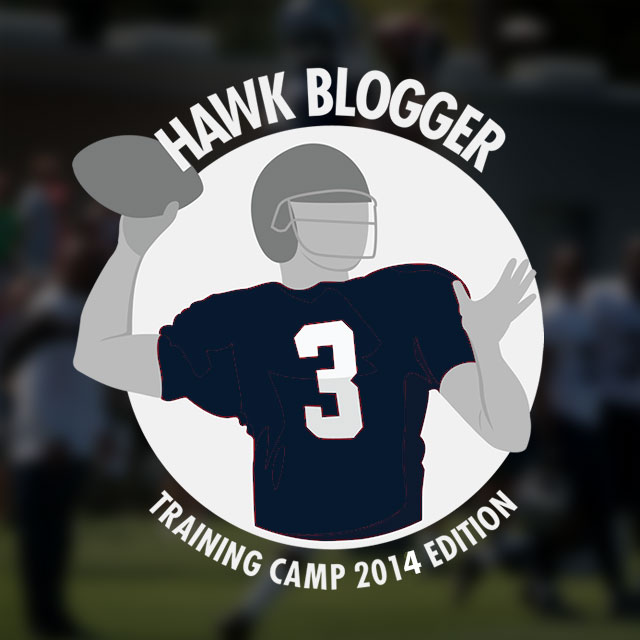 OFF THE CUFF
Eric Winston is starter material
It has been only two practices. Michael Bowie has not yet gone a full practice. Justin Britt is a rookie who should improve with experience. All these are legitimate reasons to question whether newcomer Eric Winston will start the season as the Seahawks right tackle. That said, Winston is a completely different level of pass blocker than Britt, and is very well versed in this run scheme. Britt looks stronger, and may be a better power run blocker (need to see more of both to assess that), but he is still learning the zone blocking system of Tom Cable. Winston learned essentially the same scheme under Cable’s offensive line teacher, Alex Gibbs. He struggled last year in Arizona, but that was running a power scheme. Every year he has played in a zone scheme, he has been an above average right tackle. He grades out as an improvement over Breno Giacomini when looking at those past years of performance. There are also some subtle clues coming from the team about their expectations. Winston was made available for the press after his first practice to do a press conference, and then was on the radio again today. Generally speaking, the PR staff does not showcase new additions like that unless the in-house expectation is that the player will play a meaningful role on the team. So…it is early, but the right tackle position is already far better than it was 48 hours ago.

Morrell Presley could be a dark horse in the tight end battle
The news about Anthony McCoy injuring his other achilles tendon turned a position that was largely set into one that has a clear opening behind Zach Miller and Luke Willson. McCoy was a dual-threat player who could block and catch. None of the remaining tight ends on the roster are as well-rounded as McCoy, but one player who has jumped out as a potential playmaker is Morrell Presley. He is an undrafted rookie out of Division II California University. Reports had him signing as a receiver for Seattle, but he is getting almost (all?) his snaps with the tight end group. He had a nice seam route for a touchdown a couple days ago, and was getting open again today. At 6’3″ 225 lbs, Presley is not going to be the most stout blocker, but there are not a lot of blocking tight ends left on the roster after Willson and Miller. Cooper Helfet is a guy who has hung around the practice squad and always makes plays. Presley and Helfet could have a hidden battle going on the remainder of camp. Rashaun Allen has not been as impressive so far.

Brock Coyle worth watching
Bobby Wagner sat out with an injury today and Coyle took the #1 snaps at middle linebacker. That says something considering Heath Farwell was the backup MIKE last year. Coyle has looked good when the pads have come on. He fills well against the run, and made a thumping hit again today. Special teams play will be key for him, but I’ve enjoyed watching him play so far.

The fly pass?
Everyone remembers the Percy Harvin fly sweep in the Super Bowl where the receiver appeared shot out of a cannon as he took the handoff and traced his way along the sideline. The team showed a variation of that today where the handoff is faked, the receiver continues running laterally, and the quarterback throws the receiver essentially into a screen pass. The offense tried it a couple times, and was still ironing out the kinks. It looked like a promising variation.

STAND-OUT NEW FACES
FB Kiero Small
Small was the first fullback called into action today. Not sure if that was the case all day, but it was in team drills. I have not been watching the fullback position very closely, but will keep an eye on rotations in coming days.

CB Akeem Auguste
Auguste had a beauty of a pick today during red zone drills. There was a pass interference call that I could not see if it was called on the offense or the defense, but the jump from Auguste to step in front was impressive no matter the call. It was interesting to see Doug Baldwin talking with Auguste after the play. It appeared that he was giving the young corner some guidance. Baldwin has a soft spot for undrafted free agents, even cornerbacks.

DE/DT Cassius Marsh
Marsh registered a nice sack today. He did not get as much run as he has in prior practices. I’m guessing that was by design.

S Dion Bailey
This guy deserves more attention from me. He has been solid, and had another pick today.

Williams has been very clear that he prefers playing 3-technique defensive tackle. He also played a damn fine nose tackle last year when pressed into action, and the Seahawks have precious few options behind Mebane. Williams was shadowing Mebane during a gap assignment drill. My guess is it’s a “just in case” situation more than an active plan to play Williams at nose.
2. Greg Scruggs is hungry
Scruggs stood out today in his effort. His results are not always as impressive as he or the coaches might hope for, but he is bringing consistent energy and effort throughout practice.

The team focused on red zone today. I distinctly remember these drills from 2012 when Matt Flynn was battling with Russell Wilson and Tarvaris Jackson. Nobody could score. Wilson was the most inventive of the bunch, and improvised at least one touchdown or two, but everyone else was shut out. Today, I had the defense winning six times, the offense winning five times, and five draws where the offense gained some yardage but did not clearly accomplish what they were hoping for.

A few of the touchdowns came on slants, which is a pass pattern the Seahawks have not used often. Baldwin may represent a significant upgrade over Golden Tate in running a slant. His ability to get quick separation off the line showed up as he caught a nice slant touchdown today.

Bryan Walters had a nice day as well. He had a gorgeous sideline touchdown grab and scored again later on a swing pass.

One of the things that does not get enough attention with Christine Michael is his hands. The dude does not drop passes from what I have seen. He makes some tough catches look easy.

Spencer Ware was solid today as well. He ran harder and with more confidence than I have seen so far this year. Do not forget about him in this whole beast-less running back rotation.