Search
Home
General Analysis
The discussion following the Seahawks win over the Redskins ranged from Russell Wilson being the best player in the NFL to Seattle being more vulnerable than the championship team from last year. One quarter of the way into the season, there are some significant statistical differences, both good and bad, between this team and the 2013 version.

Seattle has scored 26 or more points in three of their four games and over 20 points in every game. They have gained 384 yards or more in every game except the San Diego game, which was actually their most efficient yardage game. The lack of offensive snaps was the only thing that kept the Seahawks from pushing the 400 yard mark again.

Contrast that with the offense from last year that had 384 yards or more just six times. This team has already done it three times in four games. Look at some of the other key offensive numbers as they compare to last year:


They are up pretty much across the board. The jump in yards per play is a big one. You can see all of that is due to a running attack that barely resembles what Seattle had last year. People forget the injuries and the struggles of the offensive line to even run the ball last year. Rushing yards are coming from places other than Marshawn Lynch. He had 308 yards rushing after four games last year and is at 306 this year.

Percy Harvin has 93 yards on the ground and Russell Wilson has 209 yards rushing. He had 131 at this point last year. I worry a bit about the sustainability of his rushing as so much of it comes on unscripted scrambles, but his legs continue to be a big part of why he gives defenses fits.

The drop in explosive plays is worth tracking. The drop is all in the passing game. They averaged 4.8 explosive passes per game last year, and are down to 4.0 this year. Their number of downfield targets continues to be far less than previous years.

They did all of this against defenses that have largely played well against other opponents.

Seattle fielded one the best defenses in football last year in large part because they had a shutdown secondary and a fierce pass rush. Neither appears true through four games this season.
The Seahawks numbers are worse across the board, save rush defense, which has been stellar. It is great to see run numbers this good, especially in this division of running teams, but run defense invariably wears down late in the year. Look at all the numbers through four games and how they compare to what Seattle did for the season last year: 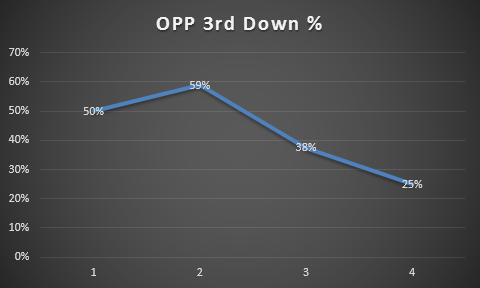 The third-down defense is roughly equivalent and has trended toward good in the past two games. They have started to regain their level of play on third-downs, and that included a game against Peyton Manning and the Broncos.

Even if you give the defense a pass there, and assume they are finding their footing, there are some concerning differences that are too big to ignore.

Red zone defense has been letting opposing teams score touchdowns at nearly twice the rate as last season. If they were holding teams to their same 36.1% rate as last year, their PPG average against would drop three points down to 17.8. Just shoring that up would make a huge difference. The quality of quarterbacks they have faced—remember Philip Rivers miracle touchdowns—definitely plays a role, but the disparity here is too great to explain away just by level of competition.

The same goes for opponent passer rating. Kirk Cousins had a higher passer rating than Aaron Rodgers or Peyton Manning. That is not a level of competition issue. Allowing Manning to go 80 yards in less than a minute after the team had shut him down all game is not a level of competition issue. They proved they could stop him, but had key breakdowns that led to scores. Those types of breakdowns showed up again against Washington.

Seattle is allowing opponents a 97.8 passer rating in 2014. Only four quarterbacks managed to reach that mark against Seattle in 2012 and 2013 combined

Maintaining a consistent high level of play is an issue for the Seahawks defense right now. People that want to tell themselves it is just because they have played tough teams are also implying this is out of the Seahawks control; that good players will just make good plays against Seattle. That is not how I see it. There are breakdowns in coverage and a lack of pass rush that are combining to make this defense more vulnerable than it was at any point last season.

That does not mean this is a bad defense. It does mean this defense is not playing to the same level as last year’s defense, and there are not a lot of reasons to expect improvement other than easier competition.

Turnovers missing on both sides of the ball

Seattle is doing wonderfully at protecting the football. They have just one offensive giveaway through four games. That may be the single biggest reason for their success in a number of tight games. By contrast, the team had already turned the ball over six times by this point last season.
The problem is the defense is not taking the ball away, and that was their calling card.

Seattle has forced just three turnovers and had one game with two turnovers. They had only four games all of last season with fewer than two takeaways.

This is a little bit of bad luck. There have been a decent number of fumbles that the Seahawks have not been able to recover. More than that, though, is the lack of pass rush leading to fewer bad choices from the quarterback. The Redskins game was a perfect example of that.

Kirk Cousins has thrown a lot of interceptions in his short starting career, dating back to last year, and Seattle got none from him. He was hit just four times and sacked just once. We need more from Cliff Avril, Bruce Irvin, O’Brien Schofield, and Michael Bennett.

Seattle has managed a 3-1 record despite some of these legitimate problems. They have been efficient on offense and remarkable against the run on defense. The story of this year was expected to be the Seahawks defense might take a step back and the Seahawks offense would make up for it. That is playing out to some degree.
If the Seahawks can start to lock in their red zone defense and start to convert third downs at a rate in the 42-44% range, very few teams will be able to hang with them. Few can even now. The sky is not falling. But hiding behind level of competition and small sample size does nothing to help this team improve. You can be certain Pete Carroll and his staff have these same numbers in mind.