Free agency is set to begin on Tuesday this week. There are some fantastic talents on the market, and some potential for high return on investment for smart shoppers. I decided to try something new this year that could be a fun way to track the market as a Seahawks fan. You have seen NFL Draft big boards that rank the top players in the upcoming draft regardless of position or team need. I have created a free agency big board specifically with the Seahawks in mind.

Whenever we are talking about this many players, it is useful to build your own scoring system to both explain what you value in a player and create a stack ranking that is easier to discuss and debate. I regularly value free agents for the Seahawks differently than others. My hope is this helps to explain how I arrive at those conclusions.

Short term impact – How much can the player impact the Seahawks in 2015?
Long term impact – How much can the player impact the Seahawks over the next 3+ years?
Scheme fit – How well does the player fit how Seattle plays, and what they ask of that position?
Need – How much do the Seahawks need to add a player that possesses these talents? This may differ by position. For example, the Seahawks need a receiver, but not a slot receiver. They need a DT, but not a 3T rush DT as much since they have Jordan Hill.
Cost – How expensive will this player be? A higher score means more expensive.
Risk – How likely is this player to earn the contract they would command? This takes into account confidence in a player’s performance, injury, off-field, and other things that could impact that question. A higher score means more risk.
The formula I arrived at is:
(short term impact * 2) + (long term impact * 4) + (scheme fit * 3) + (need * 1.5) – (cost * 5) – (risk*3) = Score

I made one moderation for CB because I strongly believe spending big on another secondary position would be a mistake, so that position gets (cost * 6) instead of  (cost * 5).

Without further adieu, here are the results of my Seahawks free agent rankings: 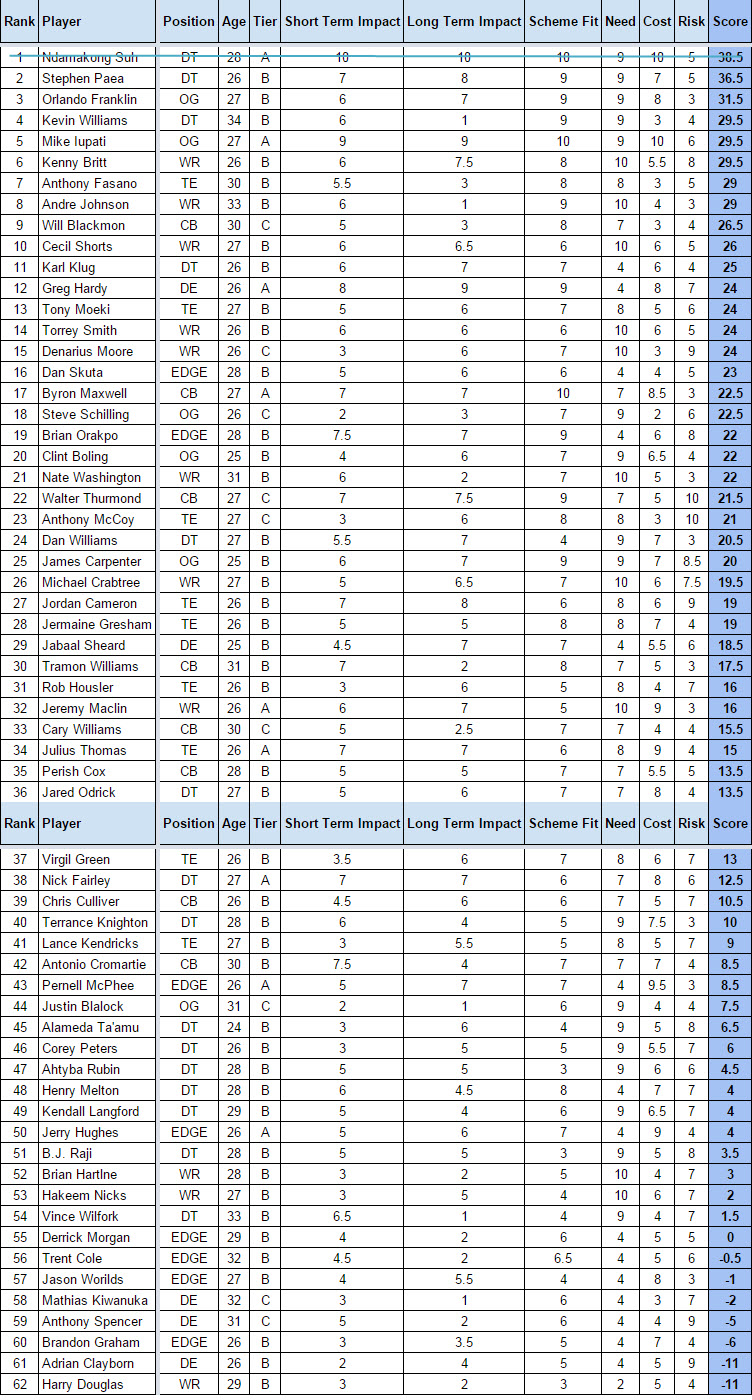 This does not equal who I believe the Seahawks will necessarily end up with. It is a ranking of players who I believe are the best combination of cost, upside, fit and risk. Suh is probably the top player on many teams boards, but that does not mean he is likely to go there. I could add another factor for mutual interest, but that would be total supposition since I don’t know these guys or their agents.
Also, signing a player who is top cost also comes with a need to shed salary elsewhere. For example, I doubt the Seahawks could get Suh now that they have kept Marshawn Lynch.

UPDATE: Suh is reported to be essentially off the market, going to Miami


Paea is more realistic acquisition for the team, but there will be many suitors.

Orlando Franklin was one that surprised me. He is a good run blocker, and younger than I thought. He can swing outside to tackle as well. Tom Cable has always valued that kind of versatility. It is hard to judge what his market will be, but you can bet it will be less than Mike Iupati. That makes him worth a look from Seattle.
Kevin Williams shows up in the top five for his combination of low risk, decent impact, proven fit and expected low cost. Like I said, this is free agent ranking unlike any others you will see!
Kenny Britt is the top receiver on the board for his combination of youth, upside, expected low cost and the strong need at receiver. I liked what I saw from Britt last year catching passes from terrible quarterbacks. Matt Hasselbeck once called him the most talented receiver he ever threw to. There are real risks there, but if the cost is right, they would be worth taking.
Anthony Fasano is the top tight end on my board because the Seahawks need a good blocking tight end more than a pass-catching one. Luke Willson has shown flashes, but is not a great blocker. Zach Miller was just cut, and there is nobody else on the roster who can block reliably. Fasano is a good combination player who could come for cheap.
Andre Johnson is technically not a free agent yet, but should be soon. He would be an ideal addition, but it would be a very short term rental.
Will Blackmon is the top corner on my board because of the combination of cost, fit with the scheme and reasonable talent level. Another former Seahawks corner, Walter Thurmond, is down at #22 due to the risk associated with him. Now, he just had a torn pec this year, so this might be the perfect time to get him for cheap. Those types of injuries are not chronic, and it may have allowed his lower body more time to heal from old injuries.
Karl Klug may be a new name for folks, but he would be far higher on this board if the Seahawks had more of a need for a rush DT. He is young, a talented interior rusher and probably will not command a huge salary.
One guy to watch on this list is Brian Orakpo. He is a potentially game-changing pass rusher who will be more affordable due to the injuries he has suffered. A team that buys low on a risky pass rusher and hits is a very happy team. Orakpo has Pro Bowl talent if he can stay healthy.
Let the games begin!