John Schneider dominated the NFL from 2010-2012 with shrewd drafting that shaped a championship football team. A draft class that yields three starters is considered a success. Those three drafts met that bar, and raised it with at least one All-Pro player drafted each year. The next two drafts have yet to yield either three starters or even one Pro Bowl player, let alone an All-Pro. Frank Clark and Tyler Lockett bring high ceilings to this years draft class. Tonight, as the Seahawks enter their third preseason game against the Chargers, the performance of those last three drafts will take center stage.

The typical NFL scouting department uses a scale from 1.0-9.0 to assess players coming into the draft. The National Football Post had a good article about this that explains it in more detail. I have used it in the past, but for our purposes here, it is a little too complicated. Instead, I used a custom scale that every football fan should be able to grasp.
6.0 grade: Hall of Fame level player
5.0 grade: All-Pro level player, among the top 2-3 players in the NFL at his position
4.0 grade: Pro Bowl level player
3.0 grade: Starter
2.0 grade: Backup
1.0 grade: Fringe NFL player, bounces around the tail end of NFL rosters
0.0 grade: Not an NFL player
Keep in mind that the goal is to find three starters in each draft, and that Pro Bowl or All-Pro players are what create a championship roster. In other words, bad teams can find three starters in every draft and still be bad if the overall talent level of the team is not that high. Adding those elite talents to your roster is what either moves you up in the world or sustains your dominance.

The season has not even begun, so grading this most recent draft class is all about projection. It will take at least three years to evaluate this group fairly. That won’t stop us from having a bit of fun with them anyway. 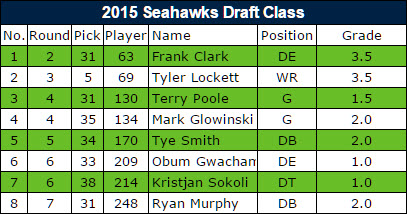 Both Clark and Lockett have already shown enough to be considered future starters. The hallmark of impact players is that it does not take long for them to show they belong. These two rookies have gained the confidence and respect of the veterans and coaches in no time. Each player should get considerable time with the starters during the game tonight because they are already considered part of the starting rotation. In time, they may prove to be Pro Bowl level contributors.
The rest of this class has yet to distinguish themselves to the point of pushing for clear reps. Tye Smith and Mark Glowinski are probably the best of the rest, and both could grow into starting players over time. I went back-and-forth on Smith being a 2.5 given his play in the first two preseason games, but ended up at 2.0 because we will probably see a lot less of him tonight with the return of all the cornerbacks.
Richard Sherman, Cary Williams, Will Blackmon, Marcus Burley, and Tharold Simon are all firmly ahead of Smith. Once he shows enough to nudge ahead of one of those players, then his grade would go up.
Not included in that list, but worth mentioning is undrafted free agent S Ronald Martin. He is at least a 2.0 player, and probably closer to reaching the 2.5 threshold than any of the players outside of Lockett and Clark.

This group is starting to show some strength, with potential for upside. 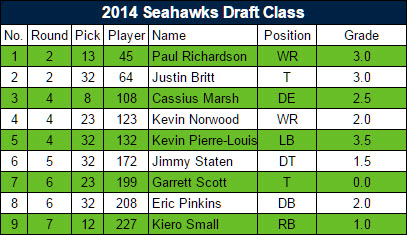 Paul Richardson proved late last year that he was growing into a starting caliber receiver before his injury. He is almost certain to start the season on PUP, but there have been no complications with his recovery (the opposite, in fact), so he should be expected to return and contribute this year. I have not yet seen next-level talent from Richardson like I have from Lockett, and their grades reflect that.
Justin Britt has been a solid starter at right tackle, and will now play his second game as a left guard. His upside may be greater at guard, which could raise his grade to above-average starter in the coming season or two.
Not listed in the table above is undrafted free agent T Garry Gilliam. Gilliam also grades out as a starter (3.0), with at least an equal chance to increase that grade as Britt.

The question for these two players is whether they are starters due to their talent or due to the lack of talent at those positions on the roster. Only time will tell.

Kevin Pierre-Louis is the guy who has demonstrated the most upside in this group. I briefly considered grading him a 4.0 (Pro Bowl) because he has flashed that level of talent at a position where he should be able to claim that level of recognition. Still, he has not played a full season or consistently shown what he can do in the regular season. There is little doubt he will be an above average starter when he breaks into the lineup as soon as next year. He should get significant run tonight, and I expect him to show out against the Chargers starters.
Cassius Marsh is a wildcard. He is at least a productive backup. Grading him higher than that will require production against NFL starters. Tonight is a great chance for him to show that he can do more than dominate second level players on the practice field or in garbage time during the preseason. The potential is there for him to go as high as a 4.0 player if everything comes together for him.
Kevin Norwood and Eric Pinkins are trying to show they belong on this roster. Pinkins should be in good shape. Watch him on special teams tonight. Norwood may be on the outside looking in unless he gets more chances to make plays.
Two other key guys from this rookie class that are not listed are LB Brock Coyle (2.5) and S Dion Bailey (3.0). That makes five starting-level players from this rookie class, with the potential for more, and upside for a Pro Bowl level player somewhere in there.

Before people jump all over the Seahawks draft in 2013, they should know that entire draft is now recognized as one of the worst in NFL history. NFL.com already named it the second-worst in the past 25 years. 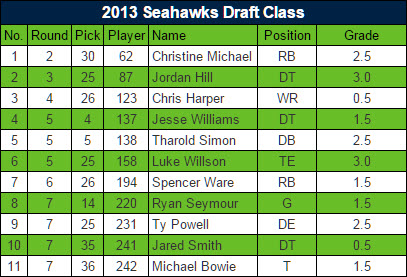 The most controversial pick of this group has been Christine Michael. People were shocked to see the team draft a running back so high two years ago, and I have been the conductor of his hype train since his rookie year only to see him fall well short of his potential. His talent level is in the running for the highest of any player drafted by Seattle in the past three years. If he could get out of his own way, this is a 4.0 player, who could be a 4.5 in this run-heavy Seahawks system. Tonight is the latest in a series of opportunities to show he deserves the “professional” part of being a “professional football player.”
Jordan Hill is very close to being a 3.5. His finished last season on a tear, but his lack of ability to defend the run makes him a pass rushing specialist and rotational player. It is hard to label someone like that an above-average starter. If he collects another 5-7 sacks this season, those questions go away.
Luke Willson was a starter on a Super Bowl team and was not out of his depth in doing the job. His upside might not be much more than that, but he is solid contributor on a winning team.
Tharold Simon is the interesting one here. He has the talent to be a 4.0 player. His preparation and inability to control his emotions on the field have held him back so far. People can point to his poor performance in the Super Bowl, but he proved he could play good football during his short starting stint in the regular season. He returns tonight and may push Williams for that starting spot before the season ends.
That would give the team their three starters in a draft that was a total bust for most NFL teams. OL Alvin Bailey (2.5) adds additional talent to this class as an undrafted free agent, who should get some time tonight at right tackle.