A lot can change in ten days of training camp. The offensive line shuffle has continued, and we have one preseason game under our belts. Time to take a look at how players are sorting themselves out thus far.

I noticed a couple errors in my last roster summary, and have updated the 2014 column with the correct total that the team broke camp with. The average keep since 2010 was updated to reflect the changes. 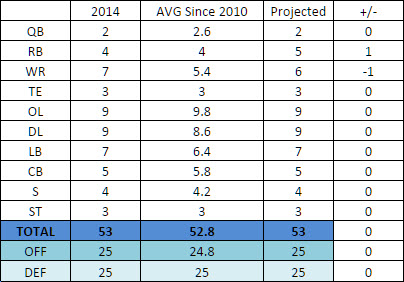 My projections have changed a bit as well. I went four to five running backs, and from five to six receivers. That meant trimming elsewhere. The cuts came from the offensive line (1) and the cornerback spot (1). This ends up with a balanced 25 players on both sides of the ball, and pretty closely mirrors how the front office broke things out last year.

Some things have become more clear, and others less so.

I have moved Rod Smith onto the roster bubble, which may be optimistic. He is a better prospect at the position than Thomas Rawls, but Rawls is a far more accomplished special teams player. The continued speculation about Will Tukuafu making the team still seems silly. Keeping two fullbacks when that position barely plays to begin with is a waste of a roster spot, and Derrick Coleman is the most valued special teams player on the roster.

Bumping the receivers from 5 to 6 gives the team space to keep Ricardo Lockette and whichever young receiver prospect they most value between Kevin Norwood, B.J. Daniels, and Kevin Smith. Kasen Williams, despite his strong play, is still a more likely practice squad candidate. There is an outside chance that Paul Richardson will come back and force a tough decision. That probably would push out Norwood, Daniels or Smith.

Despite two terrible drops in the game, I still have Anthony McCoy ahead of Cooper Helfet. McCoy is the strongest blocker of the tight ends. If he can just make the easy catch the rest of the preseason and stay healthy, I think he adds more to that position group than Helfet.

Dropping OL down to 9 was tough. It would not surprise me to see the team grab a veteran after cutdowns. Keavon Milton and Terry Poole are the primary players battling for that last line spot. Pretty much everyone from Poole on down that list could be stashed on the practice squad with no problem, which plays a role in setting a lower number here.

Linebacker is pretty set. Eric Pinkins has the strong edge over Tyrell Adams due to special teams play and previous experience with the team.

Going down to five corners was the toughest cut on the team. Right now, I have Marcus Burley at the nickel corner and Tye Smith beating out Will Blackmon and Mohammed Seisay for the last spot. Burley has become a core special teams player and is under club control next year as a restricted free agent. Blackmon has a non-guaranteed $1M contract, but is easily the most reliable corner on that list after the starters and he can play inside or out. Seisay has played well on special teams and at corner, and they traded a decent draft choice for him. Don’t be surprised if they steal a spot from the linebacker position and keep six corners.

Going with four safeties means a guy like Steven Terrell is on the outside looking in. Deshawn Shead and Dion Bailey could play either safety spot and are strong on special teams. Terrell could be stashed on the practice squad.