I like to capture the team’s performance through each quarter of the season. It has proven to be a great way to see where the team is trending, and often demonstrates change that I would not have otherwise noticed. We will start this year by comparing where the team is after four games compared to where they were last year after four games. When we get to eight games, we will compare to where we were at four game this season, and so on. 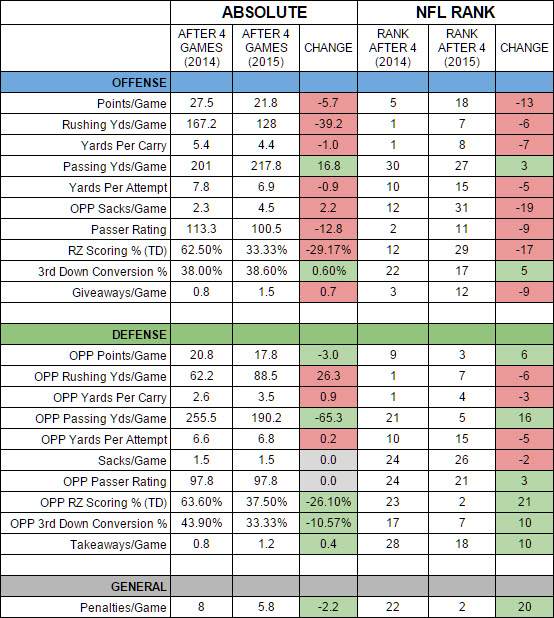 Offense flails while defense is mixed

Seattle was 3-1 at this point last season. They were 4-0 at this point in 2013. They were 2-2 in 2012. This Seahawks team has gotten off to a rough start. There were holes that were showing up at this time last season, which would soon lead to two straight losses, a 3-3 record and the trading of Percy Harvin.
Even so, that team ranked #1 overall in rushing yards and #2 in passer rating. Russell Wilson had 8 touchdowns and 1 interception. The defense was #1 in rushing yards allowed, but was really struggling in defending the pass and the red zone.
This Seahawks team has yet to prove dominant in any aspect. They definitely show more promise on defense, ranking higher in points allowed and being far better in the red zone, but their numbers are mostly down compared to the flawed squad that started last season.
The most encouraging aspects are definitely the situational defense the team has played so far. Third down and red zone performance is up considerably. Seattle struggled to defend the red zone all last year, even though they finished tops in the league in points allowed. They finished 20th in that category.
To give you some idea of how important red zone defense is, if the Seahawks had managed the 37.5% rate they are achieving this year over the course of the season last year, it would have shaved a full two points off their opponent scoring average (13.9 vs 15.9).
Seattle was giving up a ton of passing yards last year (255/gm) at this time, but had faced Aaron Rodgers, Philip Rivers and Peyton Manning. That would have been less of a concern if they did not also give up a ton of yards and a high passer rating to Kirk Cousins.
Outside of the first game of the season against Nick Foles, this Seahawks pass defense has been far more solid. Yes, Rodgers finished with nice numbers in week two, but the Seahawks held him down for three quarters and largely only got beat on offsides breakdowns. This upcoming game against Andy Dalton in Cincinnati will tell us a lot about whether this pass defense is where it needs to be.
Pete Carroll has to be happy to see the performance in penalties. Their jump from 22nd to 2nd is remarkable, and that ranking at week four was a high-water mark for the Seahawks who finished dead last in that category last year.
Turnovers were hard to come by last year, but the team made up for it by averaging less than one turnover per game through four weeks. The team has had more trouble with that this year. They turned the ball over three times against Detroit, something they did only once all of last season, and have twice the amount of giveaways (6) through four games than they did in 2014 at this time.
Some of that is directly tied to the area they have fallen the farthest. Seattle is a full 19 spots lower in sacks allowed through four games this year. It’s been ugly. It could get uglier this weekend.
Fans tend to forget the struggle of every season. The 2012 squad was 6-5 before finishing 11-5. The 2014 squad was 3-3 and then 6-4, before finishing 12-4. Even the famed 2013 team lost two of their final four games, including one to the Cardinals 17-10 at home for Wilson’s first home loss. They did not secure home field advantage until the last week of the season, and their was plenty of hand-wringing about the offense heading into the playoffs.
We love football because it is a battle. This team is already different than previous ones. The future does not care about the past. The present is underwhelming, but each week provides a new opportunity to reveal glory and power. The 2015 Seahawks look very little like a championship team through four games. Three of their next four games are on the road. This pivotal stretch will either set the team up for a terrific finish or a desperate one.