Seattle enters this crucial game against division rival Arizona with the worst red zone offense in the NFL. The Cardinals boast the fourth ranked red zone offense. In a game where the four point difference between a touchdown and a field goal could decide the outcome, it is worth diving below the surface to try and understand why this Seahawks red zone offense has floundered thus far.

Going from mediocre to bad

The Seahawks have not been a great red zone team since 2005 when their 67.6% touchdown rate ranked second in the NFL. Their Super Bowl teams had many strengths, but red zone efficiency was not one of them. That fact became magnified with the way the Super Bowl ended last season, and led to the team acquiring one of the best red zone threats in the league, Jimmy Graham, to compliment Russell Wilson and Marshawn Lynch. The results have been awful thus far. 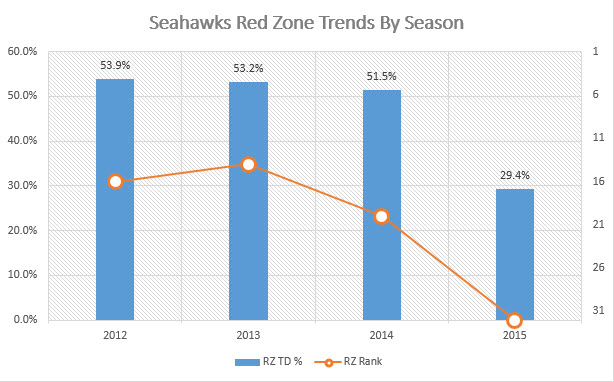 Seattle has gone from a league average red zone offense to the worst in the NFL. We are going to set aside, for the time being, their steep decline in red zone chances, and just focus on what has changed in terms of their efficiency with the chances they are getting.

Russell Wilson has not been himself

Wilson came into the league as a rookie starter who was protected as part of a conservative offense. Even then, he had a gift for scoring that showed up in the red zone. He had a sparkling 18 redzone touchdowns and 0 interceptions that rookie season, and followed that up with another 18 touchdowns and just 1 red zone interception in 2013. He is nowhere near that level so far this year. 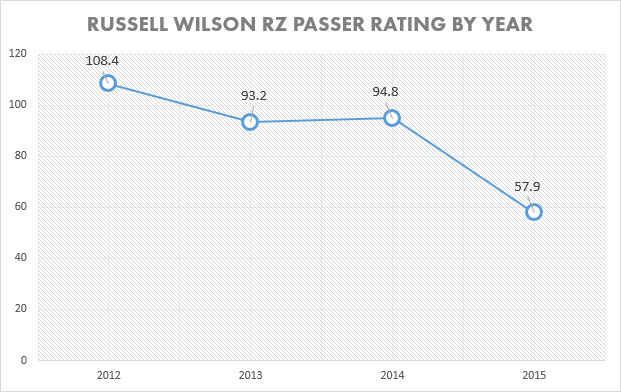 I should note that I am using Pro-Football-Reference.com, and their definition of the red zone, which includes the 20 yard line. Stats Inc, the official NFL statistics provider, defines the red zone as the 19 yard line and in. That may seem inconsequential, but Wilson has an interception at the 20 yard line this season, which brings his rating down from the 75.9 to 57.9. I had completed most of my research when I learned of this discrepancy, and decided the findings all still applied.
For example, even if you strip out the interception Wilson threw from the 20 yard line this season versus San Francisco, his interception rate (3.7%) is still double what it has been in the past. The following shows how that looks each year. 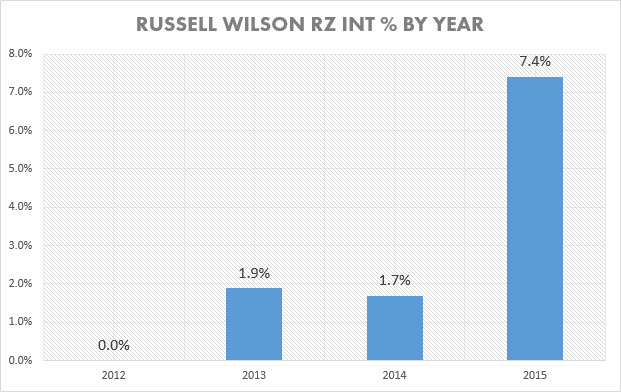 My first thought when I saw this was that it had to be linked to increased pressure. But if you go back and look at his red zone interception against the Bengals and the other versus San Francisco, pressure was not a major factor. These were judgment calls by Wilson. The pass in Cincinnati was forced into a tight spot. Graham did a poor job of running his route and faded away from the throw, which contributed to the result, but it was still a forced throw. 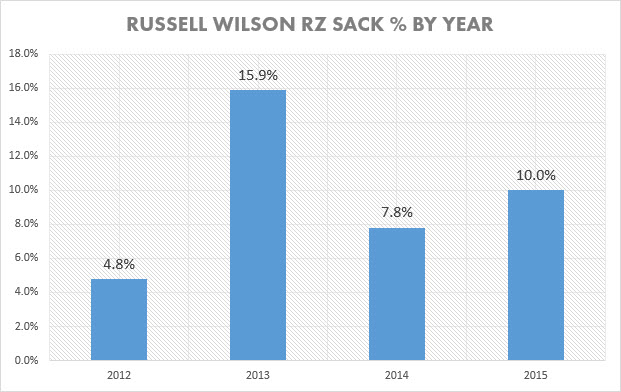 I was surprised to see that even though Wilson’s sack rate in the red zone was higher than usual this season, it was not the worst it has been. He threw only one red zone interception in 2013 despite being sacked 10 times and at a 15.9% rate per red zone dropback.
It was also surprising to see that Zach Miller was tied with Golden Tate for the team lead in red zone touchdowns over the 2012 and 2013 seasons. The fact that neither player remains on the team raises the question of whether Wilson has developed the necessary confidence and chemistry with his new weapons. 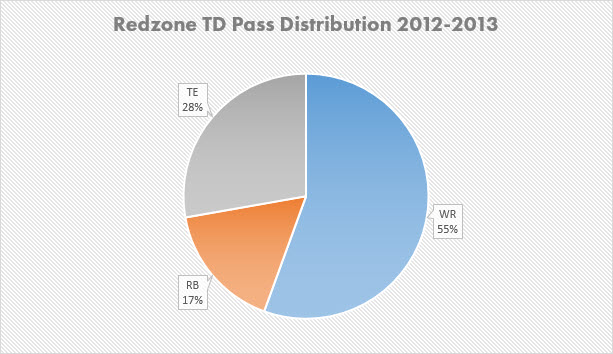 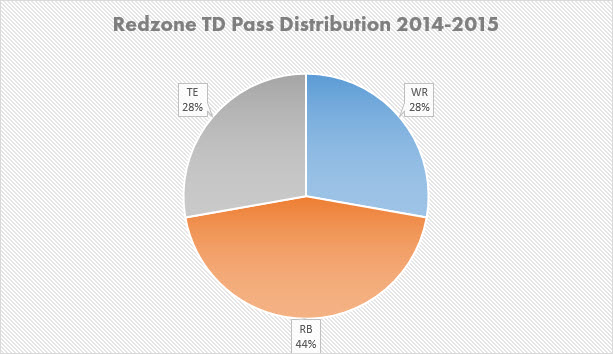 Notice the shift to running backs, and the significant drop in wide receivers. Tate had seven red zone touchdowns in 2012-2013. Wilson has not found a new favorite receiver to replace that production. Marshawn Lynch led the team in red zone touchdown receptions last season. Of the three red zone touchdown passes this year, one is to Doug Baldwin, one is to Graham, and one is to Fred Jackson.
The team needs to create what Pete Carroll would call a “factor” in the red zone. Graham was brought here to be that factor. For all his height and athletic ability, I can recall only one fade thrown his way all season, which he was unable to catch. It is on Darrell Bevell to figure out a way to get Graham involved down there, and up to Wilson to give him a chance to make a play without making a foolish or forced throw. It is also a mystery why Chris Matthews has been ignored in the red zone thus far. If teams are taking away Graham, you would expect Matthews to be another great option for a fade at his height.

There has been some discussion about the team asking more of Wilson this season overall. That is true. He is throwing the ball more often, and taking on more responsibility at the line of scrimmage. That has translated into a different makeup of plays being called in the red zone as well. 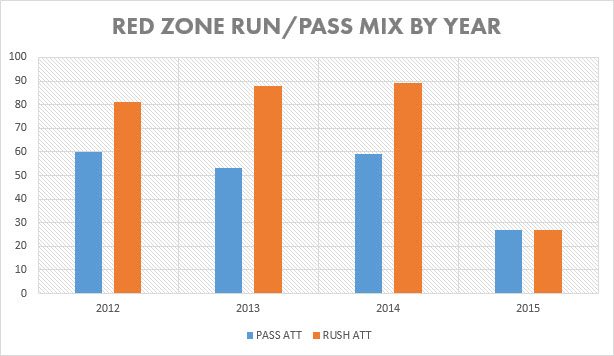 The lowest percentage of red zone run plays before this year was 57% in 2012. Seattle is an even 50/50 this year so far. Running the ball more often may not be the answer to the Seahawks red zone woes considering the team was not a great red zone team beforehand, but the departure from the run when the pass has been so lacking has to be looked at.
Seattle has not been a powerhouse run team in the red zone. They only averaged 2.9 YPC in the red zone during their championship season in 2013. They were best in 2012, when the read zone really emerged, and averaged 3.7 YPC. They are at 2.5 YPC this season.

Red zone offense is one of the tougher aspects to master for any team as there is less space for the defense to defend. Choices must be made faster. The definition of “open” has to change, and the willingness of players to absorb hits must increase. It is no surprise that seven of the top ten red zone offenses are quarterbacked by Tom Brady, Andy Dalton, Carson Palmer, Drew Brees, Ben Roethlisberger, Andrew Luck, and Aaron Rodgers.
It is more about the quarterback than about their weapons. Their ability to diagnose a defense, anticipate a weakness and exploit it at just the right time makes them very difficult to defend. The threat of an effective running game greatly helps.
Seattle has started this year with a new offensive line and a number of new receiving weapons. It is clear that Wilson has not yet found his comfort zone, and neither has Darrell Bevell. The line is starting to show some progress, and Wilson is starting to show some chemistry with Graham. Those are positive signs for what came come during the second half.
This Seahawks offense could be one the biggest turnarounds of the season if they can find their red zone rhythm. They still have the top red zone receiver and top red zone rusher from the past four seasons playing on the same team, and a dual threat quarterback to give defenses more headaches. The growth process has taken longer than expected and has been painful to witness, but the metamorphosis could be a thing of beauty. There is no better time to start than this Sunday.