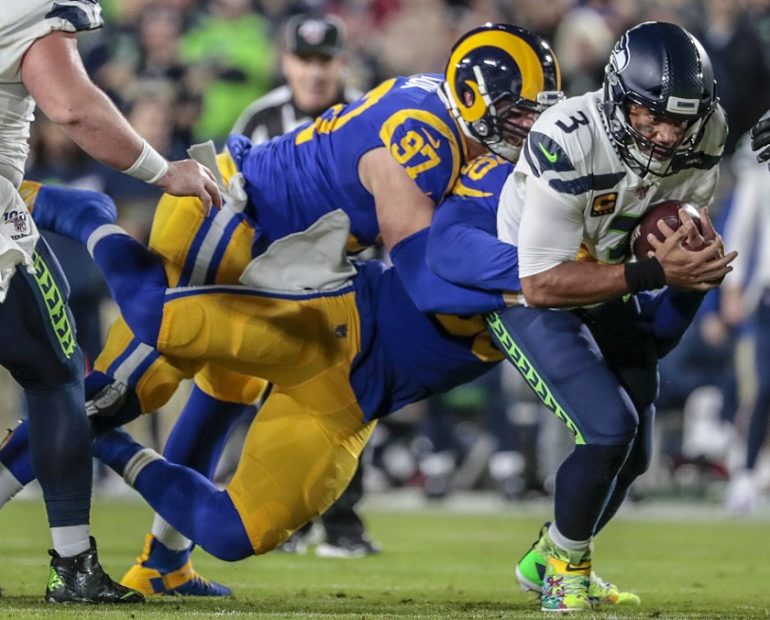 A Statistical View of the Seahawks Offensive Downturn

Sunday night’s loss to the Rams was just the sixth time in Russell Wilson’s career that the Seahawks offense failed to score a touchdown. Sean McVay and the Rams cut through the Seahawks defense for the first half before sputtering in the second half. The game was well within reach until the middle of the 4th quarter, but the offense never figured it out and mustered a mere six points all night. The lackluster performance continued a troubling trend of the offense not being good enough.

The 2019 Seahawks are not Pete Carroll’s ideal team, lacking a strong defense and possessing a middling run game. Despite the recent defensive surge, this team needs a great offense to win games. Unlike previous years, Russell Wilson came out red hot this season, quickly becoming an MVP candidate and playing at a higher level than he’d ever before. The phrase “Let Russ Cook” has been a popular way to express frustration in the Seahawks archaic offensive philosophy of establishing the run. For this first part of 2019, Russell was absolutely cooking.

Then the last few weeks happened. Russell cooled, and with it, the Seahawks offense. Tyler Lockett had a leg bruise, then came down with the flu and has not looked the same since. The offensive line has been a disaster, surrendering the most sacks in under 2.5 seconds of any team in the league. The once MVP favorite has looked merely mortal the over the past month, which is simply not good enough for a team that demands his excellence every single game. Here’s a table of the Seahawks offense this season in terms of EPA and Net EPA per play (explainer below*) , with their league rank in parenthesis.

A couple things stand out in that table. First, the run game has fallen off since last season which is not good news for a team that prides itself on establishing the run (they ranked 6th last season). Having a negative EPA per rush is not unusual, but it does demonstrate the struggles they’ve had. The pass game is what should have fans more concerned. That may sound silly for a team that is ranked in the top ten once accounting for their schedule, but the recent down turn is worrying. Here’s a look at raw EPA before and after the bye.

There’s one positive from those numbers and its that the run game has finally looked effective. Unfortunately, the passing offense fell off a cliff. Even Net EPA puts the pass offense at 24th in the league since the bye. Why the sudden change?

The three defenses the Seahawks have faced since the bye rank 22nd, 14th, and 6th in pass defense EPA, not exactly murderer’s row. Tyler Lockett noted in his post-game interview that the offense had stopped passing deep the past couple weeks. With public data we can only see where throws are targeted, not the routes run. While it’s possible they are running fewer deep routes, the deep targets are actually occurring at a higher rate than before the bye.

The difference comes from the completion percentage on deep passes. Before the bye, the Seahawks completed 52% of passes that were 20+ air yards. Since the bye, they have completed just 30% of those passes. Russell Wilson was among the league leaders with a CPOE of +8.9% before week 11, but is just +1.2% since then. These numbers all tell the same story, Russell has not been playing at an MVP level the past few weeks and the offense is struggling because of it.

The offense has also struggled to avoid 3rd down recently. Before the bye, they were second only to the Ravens in getting 1st downs before 3rd down. Playing for 3rd & manageable is a risky strategy, avoiding it altogether should be the goal. Looking at neutral situation (win probability between 20-80%) pass rates may show why they are struggling to pick up 1st downs. Before the bye the Seahawks were passing on 50% of 1st downs and 60% of 2nd downs. The last three weeks those numbers have dipped to 44% and 51% respectively. This has led to more 3rd downs and longer distances on average.

The Seahawks avoided 3rd downs on 54.7% of their series before the bye. That number is just 41.5% since the bye.

Relying on an offense to consistently convert 3rd downs is a losing proposition. The recent surge of the run game appears to have convinced Schottenheimer he doesn’t need to pass as much on early downs. The players are not without fault of course. Receivers have been dropping or flat out missing passes. The offensive line has been ceding a lot of pressure too. ESPN’s Pass Block Win Rate (PBWR) measures how often a line holds up for 2.5 seconds, the Seahawks currently rank 28th with a PBWR of 51%.

Now comes the difficult part that I cannot answer sufficiently. How do the offensive woes get solved? Given the porous pass protection, the quick passing game is an option. Trading in deep shots for slants, outs, and hitches will stymie the explosiveness this offense has traditionally relied on, but it will hopefully reduce the number of sacks Russell Wilson takes (18 over the last four games).  The improvement in the run game is encouraging but relying on it for offensive production will not improve this offense.

*A brief note on some data used in this article. Expected Points Added (EPA) is a popular metric in the football analytics community. For a lengthy explainer, ESPN has a great article on it here. In short, it’s a way to quantify how much a play increases or decreases a team’s chances of scoring. A positive EPA on a play means the play increased the offense’s chance of scoring, a negative EPA means a decrease. By default, EPA does not adjust for strength of schedule. Net EPA is my solution to that, it takes a team’s performance and subtracts the average of their opponent’s ratings (I hope that makes sense). I have not found the opponent adjustment to be much more stable or predictive and therefore prefer raw EPA for simplicity. Completion Percentage Over Expectation (CPOE) is a measure of how much a quarterback completes passes over what we’d expect, based on depth and direction of the throw.