You may remember my conversation with Marshall Faulk leading up to the Super Bowl. Today, thanks to FanPrint.com, I was offered a similar opportunity to interview future Hall of Fame safety, Darren Woodson. Woodson was a five-time Pro Bowler, three-time All-Pro, and three-time Super Bowl Champion as a safety for the Dallas Cowboys. He is the Cowboys all-time leader in tackles, and currently is an NFL analyst for ESPN.

The way these things usually work is the sponsor talks about their product and the player then answers questions. Of course, the main attraction is talking to someone who played the game at a high level, but this was a case where the product was worth spreading the word about. Have you ever thought it would be cool to have a t-shirt featuring different generations of Seahawks safeties like Kenny Easley, Eugene Robinson, Earl Thomas and Kam Chancellor? What about unique custom designs that fans create featuring their favorite players? Maybe you want to celebrate a player that is more obscure and does not have gear in the team shop. Woodson is teaming up with the people at FanPrint.com to make all those things possible. It could take pro merchandise to another level. And one of the best parts is that it will benefit retired players who did not get to play when there were billions of dollars flowing through the sport. 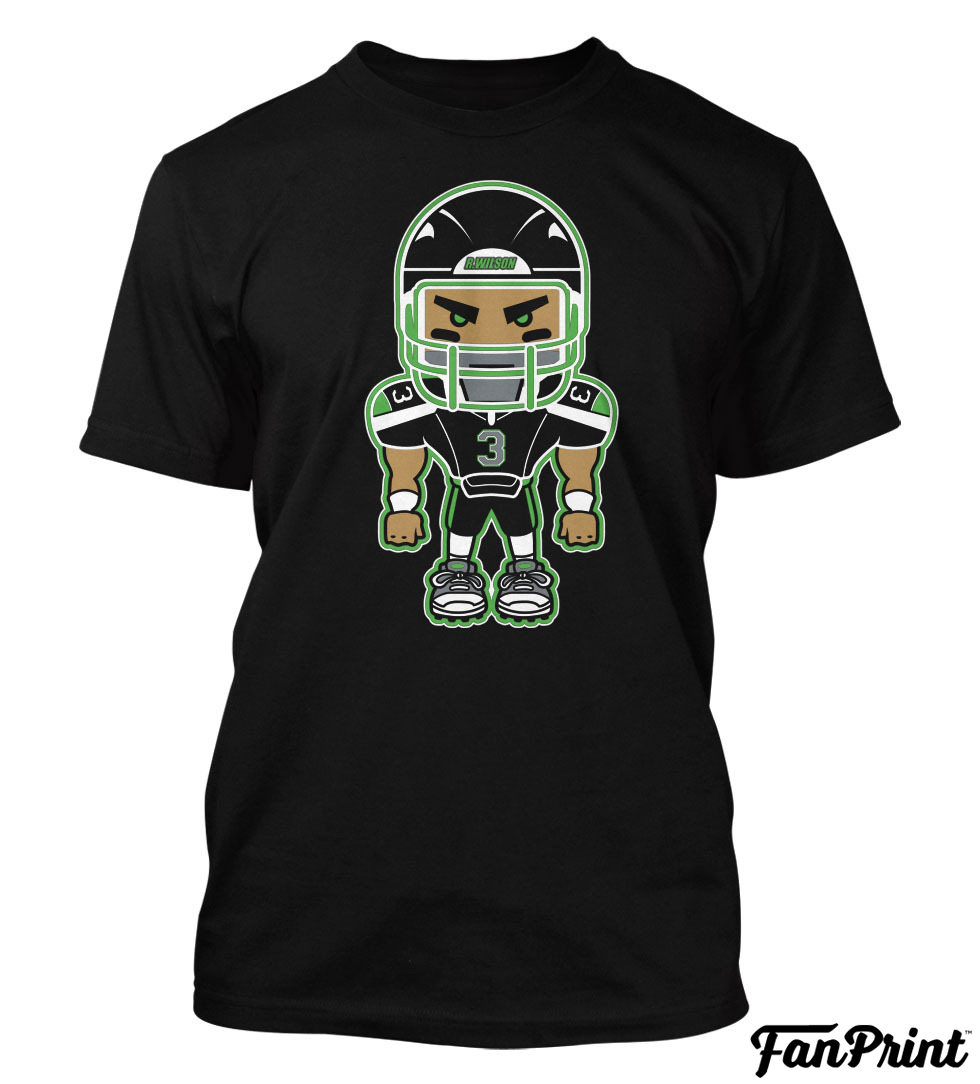 I asked Woodson for more information on that, and spent some time finding out what made their dynasty team tick in Dallas and how the Seahawks compare.

Q: Do you see any similarities between your 90s Cowboys team and the current Seahawks?


Darren Woodson (DW): That’s a great question. I was just in Seattle with Jon Gruden about a month ago to do a SportsCenter show. It was right when camp opened up. I spent time with Pete Carroll and his staff, and the players. There are so many similarities. Not only the way they are built, but they want to run the ball with Marshawn Lynch like we did with Emmitt Smith. They want to control time of possession, get turnovers, control the line of scrimmage just like we did with our offense in Dallas. And then they want to play strong defense behind it. And I know one of the things with our team with Jimmy Johnson was he always talked about having a great running game and allowing your defense to travel. Travel to Washington and play well. Travel across the country and have your defense show up. And that’s what Seattle does. They do a great job of understanding who they are, knowing their identity. They want to punch you in the mouth, they want to dominate the line of scrimmage, and they want to intimidate you. That’s exactly what we were in the early 90s. And I think one thing I did see when I first walked in was these guys are not just about last year. They want more than just what they had last year. Richard Sherman told me, “We want to be greedy. We want it all.” And I could see that. I could see it in their eyes. The way they work, the way the coaching staff prepares, the way the scouting department goes about its business, top-to-bottom, they know what they want. They know what they want to accomplish. They want to make history. And I’m a believer. I was asked a couple weeks ago on ESPN who I think is going to win the Super Bowl, and I said “Seattle Seahawks.” As long as they don’t get hurt, as long as there are no major injuries to like Russell Wilson, they can do it again.


Q: You were one of the few people who played on a team that won three Super Bowls in four years. What do you think made your team capable of doing that?


DW: The biggest thing is not becoming complacent. Richard Sherman just got a big contract. Earl Thomas just got a big contract. Even when we were playing in the 90s, the core guys were signed to big contracts. They identified the core guys, both offensively and defensively. It was about finding the leaders and captains that would not allow complacency to set in on the football team. Back then, we had guys like Michael Irvin and me and Troy Aikman, and it was not about complacency. It was about making history. The hardest thing for any team in the Seahawks situation is you start to lose certain guys. Guys in the locker room. You start losing leaders. You start losing leaders in the locker room, you’re gonna have a problem. It’s about not being complacent. It’s about knowing what happens off the field in your private time is fine, but when you show on the football field or practice, that you are focused on the task at hand. And I’m a huge believer, having been around those guys in Seattle, they are not going to be complacent. They are going to come out and play. We saw that last week. There is not going to be a letdown.


Q: It would be pretty cool if FanPrint would allow you to have the likeness of retired players on shirts, and to give those guys some money.


DW: That is definitely in our plans. I think it’s a great idea. Kenny Easley, for example, was one of the greatest safeties to ever play the game after Ronnie Lott and a lot of people don’t even know who he is. You know, bringing those guys back to the forefront would be pretty cool. And while I was out there in Seattle, Earl Thomas mentioned the greatness of Kenny Easley, and I was like, “You weren’t even born when Easley was playing.” He’s just a student of the game. Earl Thomas definitely knows who he was.


Q: What do you think closed your Super Bowl window in Dallas?


DW: Jerry Jones firing Jimmy Johnson was a huge issue. Free agency became an issue with us, simply because we lost some of our core guys. We kept our superstars, but you forget there are so many names that are key to winning. These were guys who were integral to what we did. Guys like Mark Stepnoski our center, who was huge as far as getting guys lined up properly and making the line calls. We lost him to the Houston Texans. We lost Kenneth Gant, who was our special teams ace, and kept everyone focused on special teams. You could see how it wore us down as time went on. You think you can replace people like that and players like that, but you can’t within that locker room. Those are just a couple of guys, but we lost more, and we also didn’t draft well. That was a huge issue after Jimmy left. We fell off as far as drafting guys, not only early in the rounds, but we made a living with Jimmy Johnson as far as drafting guys in round four, five, six, seven. And that’s exactly how the Seahawks are. They build their draft with a lot of unknown guys who are hungry alpha dogs who want to play. Seattle’s trying to do it at time right now, where it really hasn’t been done. You just don’t see dynasties anymore after free agency, simply because your better players get picked apart by the rest of the league.


Q: You were on a team that had a player, a star, who went some problems off the field. With the recent Ray Rice situation, how do you handle supporting a teammate that has made some bad mistakes without enabling them?


DW: It’s a fine line. A real fine line. It really is. And I can speak directly to Michael Irvin. With him, it wasn’t just one situation. He got into many situations. And we always rallied behind him. Guys in the locker room are like family. In a lot of ways, you are spending more time with those guys than with your own family because you are there all the time. You are traveling with them all the time, and sharing rooms with them. It’s like family. And as you know with family, you are always forgiving and forgetting. You’re always trying to get them on the right page, and not enable them at the same time. The one thing that Michael Irvin was, he was always a great teammate. You can have guys that can get in trouble but are not great teammates, and you’re just not going to support them that much. But Michael was a guy that would give you whatever he had in his pocket. When he was going through his problems, we were there for him. I remember one of his court dates. It was one of his national court dates during the offseason, and I see one of the first guys to walk in the courtroom was Troy Aikman. When you get a guy like that supporting you, that speak volumes of who you are as a person.

I will be working with the folks at FanPrint to setup a contest of some sort for a free t-shirt of your choosing. Not only are they providing a cool product, but they have worked out a deal with the NFLPA that donates 10% of their proceeds to the Gene Upshaw Players Assistance Trust Fund that helps former players who are struggling with life after football, especially injuries. Woodson is an investor in FanPrint and manages their partnerships. He was incredibly patient and personable in the conversation, the product is cool, and he’s a believer in the Seahawks. So show some love for the folks over at FanPrint and get someone a gift nobody else has.