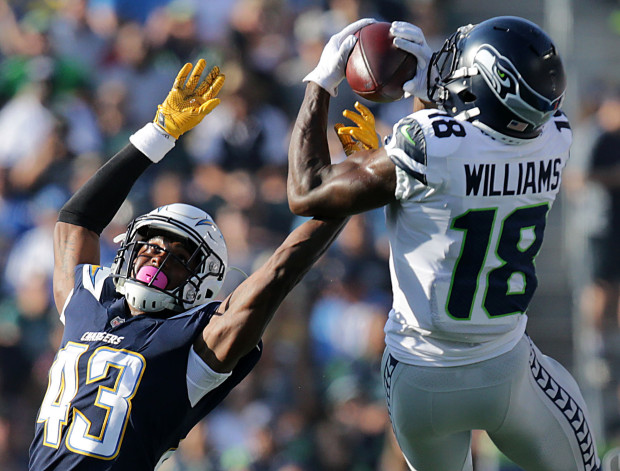 Seahawks Receivers Could Make a Leap in 2017

The wide receiver position might be my favorite position group in football and I’m just now realizing this. Receivers are so fun to watch in every aspect. Whether it’s their play on the field or their character off of it. Either way, their personalities are so unique. Wide receivers are an extremely high profile position and are considered the “home run ball” when a deep pass is thrown to them for a score, so it’s understood that these guys love the attention. Who doesn’t want attention? Especially when you’re performing in front of thousands of screaming fans.  However, you might know the term “diva” when talking about this skill position group. If something doesn’t go their way, prepare to be entertained. We’ve seen these antics with the Seattle Seahawks, mostly with Doug Baldwin. We live in a passing league now whether we like it or not, so this position is probably the second or third most important in the game today.

The Seahawks have never had that, “he’s one of the best in the league” receivers until Baldwin’s development sky rocketed. But, even now, no one goes out of their way to talk up these guys up. You know the word, pedestrian. Yeah that’s what they are. Shout out to Deion Sanders for making Baldwin one of the most prolific players in the game today by bolstering the chip on his shoulder with that term. Getting off track, but I think this receiver corps could be far more superior than we think.

With just the eye test alone in this Seahawks versus Chargers match-up, it was a thing of beauty. The Seattle receivers were hungry and they came to eat, buffet style. However, just to throw sexy in here, out of 21 targets to wide receivers, 5 were dropped. That’s 76% of passes completed. Tanner McEvoy lead the drops with two. The chemistry between the Seattle quarterbacks and receivers were on point. Preseason or not, the fight showed and it was something great to see. Even though Jermaine Kearse was tough to watch in 2016, this group as a whole wasn’t bad. The Seahawks as a team had a 2.7 drop percentage, tied for 11th fewest around the league.

Someone who didn’t record a drop in this contest versus the Chargers was Kasen Williams. He had the light shining on him on all game long. The only thing we didn’t get to see from him was a bow because he put on a show. Williams hauled in 4 passes on 4 targets for 119 receiving yards or an average of 29.8 yards per reception. One thing is certain and it’s that we haven’t seen him stay healthy. However, he has the skill-set to compete on this roster with his physicality and burst. His athletic ability to make a play is evident and it showed in this game.

Another play here shows Williams winning at the line of scrimmage on a fade route.  He creates separation, something we haven’t seen in past game action with him. Ball placement wasn’t on point from Trevone Boykin here, as I stated in my recent article, but good enough to give Williams, a former high jumper in high school, a chance to go up and get it. Shows great hand strength and radius at high point.

Kasen has worked extremely hard to get here and has shown a lot through adversity. It would be so cool if he could stay healthy and have a true shot at making this 53-man roster.

If you follow me on twitter then you know my roller coaster feelings for Paul Richardson. He’s like the girl I can’t stop going back to after a breakup. It’s an unhealthy relationship, but let’s be honest, my relationship for this whole team is unhealthy. Richardson has the talent to be great, to be known as great. However, what good is talent if talent can’t see the field? His inconsistency with staying healthy is why I can’t take him seriously.

This spectacular catch was his last play of the game after spraining his AC joint. I do believe the Seahawks need Richardson, he’s luxury, but he’s also fragile. If he can put up a 15+ game season, he could take this passing game to another level.

An underrated player in the making, David Moore. Why aren’t we talking about him? The only reason I can think of is the all around wide receiver show out versus the Chargers. Moore didn’t have any particularly impressive catches, but he flashed on tape.

Here Moore is running a shallow crossing route. What impresses me the most here is the strength he shows that resulted in plenty of yards after contact. He is quick after the catch, there’s plenty of that on his college tape. For a receiver, he shows an outstanding combination of size and speed. He ran a 4.42-second 40-yard dash at his pro day. It’s more than likely David Moore doesn’t make this team, but the hope is he will be kept on the practice squad.

Cyril Grayson, the unknown. It seems like we’re talking about the transition of non-college football players to the NFL more and more. Well, meet the next to do just that. What do we know about Grayson on the field? Well, nothing. Grayson was a track star at LSU and won four national titles as part of the school’s relay teams. So we know he is fast, but can he transition to a football skill-set?

Here’s a simple fade route ran by Grayson. He wasn’t the primary option during this play, but gets open due to bad defense. The track star puts his name into the battle of receivers trying to make this team. Even though this was incomplete due to not getting his feet in bounds, Grayson shows the hands he could provide for this team. He demonstrates great concentration while absorbing a hit. Cyril Grayson should still be considered to be the unknown, but he has speed and Pete loves speed with a lot of versatility on top of it. He’s a sleeper to make this team as he could be used in different ways, such as on special teams as well.

Another receiver that has developed with his time in the league, Kenny Lawler. He put weight on during the offseason and there’s been reports of him flashing at times in practice.

Here Lawer is adjusting to a poorly placed ball for a touchdown. Kenny Lawler is another receiver whose chance of making this roster is poor, but the improvement is evident.

Tyrone Swoopes, former quarterback who has transitioned to receiver/tight end, had a pretty decent first game for the Seahawks.

Swoopes runs a rub route and this play gets executed properly. I’m not sure what he can actually bring to this team, but I just want to be the first to say I hope he does just for the thrill of saying, “SWOOPES, there it is!” after every play he makes.

The Seahawks have tremendous depth coming into this season and I think one skill position were overlooking is this receiver group. We know what Doug Baldwin, Tyler Lockett, Paul Richardson and Jermaine Kearse bring to the table, but these other guys fighting for a roster spot will just make it harder for this front office to make decisions on cut day. Heck, we have yet to see Amara Darboh yet. This is an exciting group and I think this passing game can make a huge leap into the 2017 season and finally give this unit the respect it deserves.