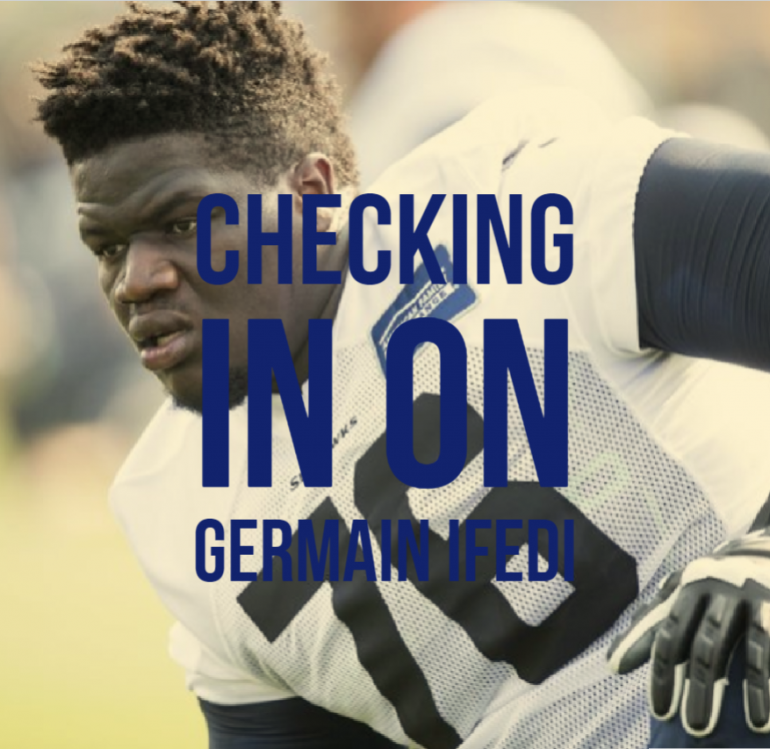 Checking In On Germain Ifedi

After playing right tackle for Texas A&M, Germain Ifedi was selected by the Seahawks with the 32nd pick in the 2016 draft. After some initial back and forth, the coaching staff announced Ifedi would move to guard for the 2016 season. Not surprisingly for a rookie changing positions, Ifedi struggled.

Coming into the 2017 season, with the departure of Garry Gilliam and Bradley Sowell, Seattle moved Ifedi back to right tackle.Ifedi got a full offseason of work, minus some time missed due to a Frank Clark suckerpunch, and is heading into his 6th regular season game as a bookend on Seattle’s offensive line.

So how has the move gone?

Ifedi got off to a shaky start against Green Bay. Ifedi mostly saw Clay Matthews and, while Clay didn’t record a sack, he struggled with the assignment for most of the day.

Ifedi has improved on this performance, however, especially showing signs of improvement in pass protection. Here he is the next week against Aaron Lynch.

And against Arik Armstead.

He had a particularly nice pass set against Eric Walden of Tennessee, picking up the linebacker in space and holding his block throughout the play.

And again here he is in space, this time across from Derrick Morgan. Ifedi picks him up, reroutes him around the pocket, and finishes by planting Morgan in the ground.

Last year, stunts were a huge issue for Ifedi. He hasn’t been perfect picking them up, but since moving out to tackle he’s shown significant improvement.

In the run game, Ifedi struggled last year to balance aggression with technique and patience. There has never been any doubt that Ifedi has the strength and mentality to bury defenders, but he rarely was able to put himself in the right position to do so.

That too has changed in 2017, with Ifedi showing improvement in both patience and teamwork. Here’s one example against Los Angeles.

Aaron Donald has the advantage here based on alignment but, with a little help from Aboushi, Ifedi is able to quickly get across Donald’s face. Ifedi then is able to display his strength, stonewalling Donald and keeping him well out of the play.

None of this is to say that Ifedi has become a top flight right tackle. Ifedi has not faced many elite pass rushers, with teams preferring to line their best player across from Odhiambo. Despite that, he’s still giving up more pressure than you’d like. But he’s giving up pressure, not sacks, and the flashes that he’s showing are promising. Even more promising though is the consistency that he’s started to display. If he can continue to improve, the Seahawks shouldn’t need to worry about the right tackle position for a while.