The Morning After: Seahawks Reach 5-0 for First Time in Franchise History

Imagine being the fan of rival team to the Seattle Seahawks. Every week, your hopes would swell that Seattle would stumble. Every week, they would find a new way to look like they were going to pratfall, and you would be able to feast on their dismay as your team would rise in the standings. And then…instead…they find a new improbable way to win. As they dance off the field and spew nauseating cliches, a truth further calcifies in your soul: we are inferior. Sure, we may beat them now and then, but we can never be comfortable. We can never be safe. Then, you roll over in bed and remember Jimmy Garoppolo is your quarterback, and cover your mouth so your wife cannot hear you weep.

The crazy thing is that there are large groups of Seahawks fans who focus more on how the team won or how close they were to losing three of their games this season. I understand the sentiment, but the idea that Super Bowl teams just waltz through the season without a worry is a myth.

I think we can all agree this Seahawks team is not as talented from top to bottom as the 2013 squad. Does anyone really remember that season? The last gasp touchdown to Jermaine Kearse in the opener to win 12-7 against Carolina? The absolute dud first half against the Texans before a miracle comeback? Trailing the Titans at halftime in Seattle, only to win by a touchdown late? Barely holding on against Kellen Clemens and the Rams at the 4-yard line to win 14-9 in a game where Russell Wilson was sacked 7 times? Falling behind 21-0 at home to an 0-7 Bucs team before winning 27-24 in OT?

This was a game I made clear throughout the week that made me uneasy. I wrote about it in Tale of the Tape. I talked about it on Real Hawk Talk. The Vikings were far better than their record indicated. This was the most explosive offense in the league that had scored 30+ points in every game except one against a very good defense in Indianapolis. They just secured their first win of the year and were entering this game with the mindset that toppling an undefeated Seahawks team on the road would vault them right back into contention.

Seattle had the bye week in front of them, were feeling good at 4-0, and were going to rest some players to take advantage of the two week break.

This just felt like a game Seattle would lose if they did not come prepared and have a great game plan. Well, a scoreless first half did little to quell that fear.

Brian Schottenheimer seemed inflexible in his desire to push the ball downfield against what had been very vulnerable Vikings corners. The problem was the Vikings were playing a deep zone and giving the corners safety help. The combination of Schottenheimer’s lack of adjustments, and Wilson’s unwillingness to check down or throw the ball away, led to four sacks in the first half and just 13 yards passing.

While many Seahawks fans were focused on what they thought was terrible defense, I was pretty pleased with how that side of the ball played. Kirk Cousins and offensive coordinator Gary Kubiak were being forced to move the ball downfield in small increments.

For the game, the Seahawks held the most explosive offense in the NFL to two explosive passes. That was by far the best the team had done in that statistic this season.

Minnesota had to convert multiple third and longs and multiple fourth downs to score their points. Of course you would prefer to see your team get off the field and not give up points, but this defense is a work-in-progress that was missing its best player in Jamal Adams.

Many will disagree, but I saw this as another step forward toward finding a style of play that will allow this defense to contribute to winning. The Vikings took 12 plays, 17 plays, 11 plays, 11 plays and 15 plays to score. I will take that over the three play, 94-yard drive Seattle gave up to Dallas a few weeks back any day.

One of the things that tends to happen when you force teams to slowly move the ball down the field is that they make mistakes. A false start. A holding call. A turnover. Cousins finished with two turnovers and his second-lowest passer rating on the year. Seattle climbed to 8th in the NFL in opponent passer rating.

K.J. Wright had one of the best games of his career. He batted down a pass early. He was smart enough to scoop up a loose ball that was actually a fumble when most players thought it was an incomplete pass. He made a fantastic one-handed interception, and he stopped Cousins on a designed quarterback draw on a two-point conversion. It is not hyperbole to say that Wright won this game more than even Wilson.

Shaquill Griffin once again played well. His pass breakup in the endzone before halftime could have been the difference in the game.

Quinton Dunbar appeared to do his job well in his first week back. It was noticeable when he had to leave due to cramps and the Vikings immediately started picking on Tre Flowers.

Jarran Reed had a great start to the game. Damontre Moore had a strip sack. Newcomer Jonathan Bullard had a key QB hit.

Seattle is due to get back Adams, Damon Harrison, Rasheem Green, and Jordyn Brooks in the coming weeks on defense. They may also add cornerback DJ Reed. Do not be surprised if they make a move over the bye week for another edge rusher as well.

Coverage has appeared to improve. The defensive line showed some flashes of improvement.

What was a total disaster, giving up 6.6 yards per play in the first three games, has steadied to 6.1 yards per play against Miami and 5.4 against the Vikings. For context, 5.4 yards per play would rank in the top 12 defenses if sustained for a season. This defense does not need to be great to win a Super Bowl. They just need to be an impediment to opponents and opportunistic with turnovers. That feels attainable.

Offensively, this game was concerning. This was the first time we have seen the Seahawks struggle to really adjust and punish an opponent. The obvious change was to start passing underneath the deep zone the Vikings were playing, but it took until the second half to make that switch for some reason.

Even then, the offense really never found a rhythm. The 21 points scored in the third quarter was more to do with the defense creating short fields than the offense dominating.

The offensive line struggled in the first half more than we have seen. They recovered nicely in the second half, surrendering zero sacks. They were the unsung heroes of the final drive when Minnesota blitzed time and again without getting home once. Travis Homer, who is a terrible runner, showcased his talents as a pass protector while picking up many of those blitzes.

His blitz pickup on the 4th down heave to D.K. Metcalf was teaching tape stuff.

Metcalf made a number of tough catches on the night. It was rainy and windy and Wilson was zipping the ball in there. His two touchdown catches were impressive.

Facing fourth down for the second time, in the driving rain, he patiently waited for hulkish receiver to cross the whole field before unleashing a perfect pass to Metcalf in stride. It was the type of poise and talent that makes him the MVP this year.

There will be time to self scout with the bye week and come back stronger for this challenge. Getting the benefit of doing that while winning is encouraging.

Seattle enters the bye week undefeated, and expecting to get back key members of the team. We should see Phillip Dorsett and maybe even Josh Gordon. Rashaad Penny and possibly even Darrell Taylor could be back as well. The offense is clearly one of the best in the NFL. The defense is improving. The special teams is arguably the best in the NFL.

They will enter the toughest part of their schedule with division games and a trip to Buffalo.

This is shaping up to be a memorable season for the Seahawks, and a tortuous one for rival fans. 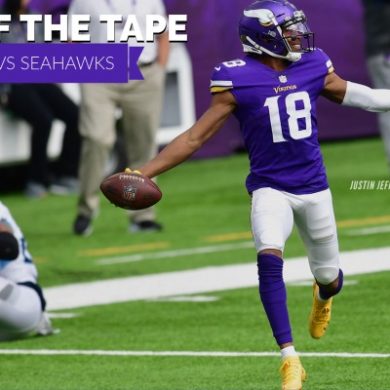 Tale of the Tape: Vikings a Dangerous, Flawed Opponent