Sleeping on planes–not sure how you do it. I have flown to India, Japan, Romania and more. I have flown in business class and in the smoking section of coach. The one constant is I don’t sleep much. I envy folks who can just conk out. I’m on a red-eye from Seattle to JFK that arrives at roughly 7AM EST (4AM for my body). My seat is in an exit row, and near the window. I think I managed about an hour of sleep, read for a bit, and now am looking at about 90 minutes until we land. There will be an 8:40 AM flight from JFK to Toronto, and then customs, and a quick chance to crash at my hotel before finding a bar to watch the early games. It sounds like I will at least be dropping by the Fox and Fiddle, as some Seahawks fans are getting together there for pre-game.
My family spent much of the day down in Olympia with my wife’s mother and my parents. My mother-in-law recently decided to give up her day job and make a full go of doing mosaic art. She’s done some amazing work, and she teamed up with my wife to plan an amazing Hanukkah present for me (see below). 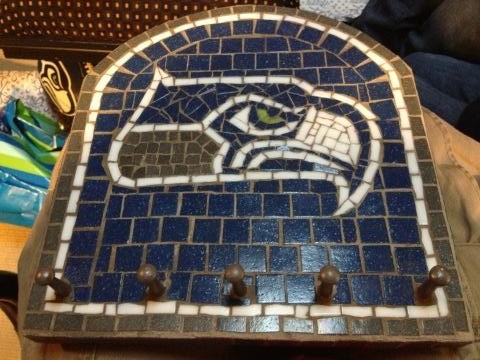 She can pretty much mosaic anything from coffee or end tables to lamp bases to platters. I kind of knew they were working on something, but I had no idea it would be this cool. A completely custom piece of Seahawks art that nobody else has, and it looks fantastic. I told her other folks would be interested, and she thought I was kidding. I tweeted about it, and a few folks have already placed orders. If you are interested, drop me a line, and I will get you connected with her. She can do college mascots, baseball teams, or others, but that Seahawks will be hard to beat!

I managed to get my car dropped off to get the five Toyota recalls taken care of (I feel safe), and hit my indoor soccer game. We play in a co-ed C league with a bunch of other people whose bodies no longer do what their minds believe is possible. Yet, I get into it with the refs and opponents like it is the World Cup. I can’t help myself. My demeanor is typically pretty laid back, but get me in a sporting event, and I compete like nobody’s business. We played a team that has not won all year, and we were up 5-2 when the other team inserted a 6’3″ lanky young player who did not belong on the field with us. Then a couple of his buddies joined. Before long, the score was 5-4. I spoke to the ref at halftime to ask if these guys were on their roster, which they were not. We ended up letting them play anyway, and eventually won 8-4, complete with a diving header from yours truly that felt like a highlight reel play in my head, but most likely looked like a guy trying way too hard and not nearly as cool as he thought.

Now, hours later, I can almost feel the bed at the hotel calling my name. Just an hour or two. That’s all I need…

This should be an epic football day. There are four early games that will hold interest for Seahawks fans. The biggest will be Green Bay @ Chicago. A win by Chicago makes that path to the #2 seed plausible. The Packers should win, and that’s fine. I’m most interested in a home playoff game. But, I’ll be cheering like hell for the Bears in a few hours. The Giants head to Atlanta, and a loss by the Giants is probably most helpful to the Seahawks, but if Atlanta loses out, the Seahawks have a long shot at the #1 seed. I’ll probably end up cheering for New York in this one. Washington heads to Cleveland without RG3. Kirk Cousins is a solid rookie, but don’t sleep on the Browns defense, especially their secondary. I was floored to see how the Redskins allowed RG3 back on the field last week after he was clearly hurt. This guy is their entire future. The team might be fighting for a playoff spot this year, but they won’t be fighting for crap if he goes down. Their decision to rest him even after he practiced some this week is prudent. Still, I don’t know that I’d take RG3 over Russell Wilson at this point purely because of the injury concerns. He’s just not built to handle the pounding a normal NFL quarterback takes, let alone one that likes to run as often as he does. I expect the Browns to win this game, and that would be a boost for Seattle.

The Rams host Adrian Peterson and the Vikings. That Vikings team has wins over the 49ers, Lions (twice), and the Bears. The Rams have tied and beaten the 49ers, and the Seahawks. A Minnesota win largely eliminates the Rams, and nobody here would be upset if that final game of the season in Seattle was meaningless for St. Louis.

I’m always nervous for Seahawks games. Well, not always. This game has me eager to see if the team can bring it’s best on the road. Seattle has started to believe. This win would put them in position for a thrilling finish. The Bills are a worthy opponent that is tougher than people give them credit for. Any kind of win will do, but it would be terrific to see Seattle win with some buffer on the road.

They are telling me it is time to get ready for landing. I will write more as time, and the FAA, allows.