Getting to face the Atlanta Falcons in the playoffs is like getting a bye week, right? All they do is lose. Russell Wilson has more playoff wins than Matt Ryan. Seattle is the hottest team in the NFL, so this should be a cake walk. It is possible for the game to play out that way on Sunday, but early signs point to a tense game pitting two worthy adversaries.

Atlanta’s Playoff Past A Blessing, Curse
Unlike the ridiculous prattling on about 1983 and road playoff losses for Seattle, the Falcons recent playoff history has relevance since it involved most of the same players and coaches from the team will face Seattle on Sunday. They face questions about it every day, and not just heading into this game. Every accomplishment, every regular season win for the last two seasons is met with indifference and calls of “paper tiger.” That wears on a team. It builds a chip on your shoulder. You can bet that the Falcons entire organization has been focused on only one thing this entire season, and it is not a Super Bowl. They want that one win. They want the monkey off their back. Then, and only then, will they allow themselves to think any bigger.

This team will be ready to play, and prepared to put their bodies on the line. They will also be steadfast in the face of an early deficit. Their determination jumps off the screen when watching them. This is a team that won multiple games they should have lost this year. Arizona won the turnover battle 5-1, and lost by four points. The Panthers sacked Ryan seven times, rushed for 199 yards, and had the game in hand before a late fumble led to a Falcons win. Football Outsiders estimates the amount of games a team should win based on their statistical footprint. The Falcons had the numerical characteristics of a nine win team, but ended with 13. Watch their games and it is hard to call it luck. They have developed the ability to win when they should not.

The flip side of this is that the Falcons will be facing two opponents on Sunday, their history and the Seahawks. It will be impossible for Atlanta fans, players and coaches to avoid those nagging doubts if Seattle punches them in the face early or late. The truth is this team thinks it has developed the traits of a playoff winner this year. They know they have never won when it mattered. That distance between belief and knowledge could play a role in the outcome.

Seattle’s Rushing Offense Poses Serious Threat
The Falcons only lost three games all season, so finding patterns from those losses is more difficult. In these cases, I like to widen the parameters to look at close wins as well as losses. The Falcons won four games by four points or less, to go along with their three losses. One of the largest disparities in those games versus their 13 victories was rushing yards allowed to their opponent. In losses, the Falcons gave up an average of 162.3 yards on the ground compared to 114.2 yards in their wins. Add in close wins, and they allowed an average of 137.8 yards on the ground compared to 105.4 in wins over four points.

Atlanta has allowed an opponent to rush for over 150 yards three times this season. They surrendered 152 to the Chiefs, 199 to the Panthers and then 195 in the Panthers rematch. They beat the Chiefs 40-24, but that point total represented the second-highest output for the Chiefs all year and the fourth-highest point total the Falcons allowed this season. The first Panthers game was described above, and in most cases would have been a loss, but instead ended in a 30-28 Falcons win. The last Panthers game was Atlanta’s worst loss of the season, 30-20.

The Seahawks offense has rushed for over 150 yards in six straight games, including last week’s total of 224, and have eclipsed 150 in eight of their last nine games overall. They are averaging 194 yards rushing in those nine games, and 214 in their last six. Seattle has rushed for over 150 yards in ten games this season, and are 9-1 in those contests. 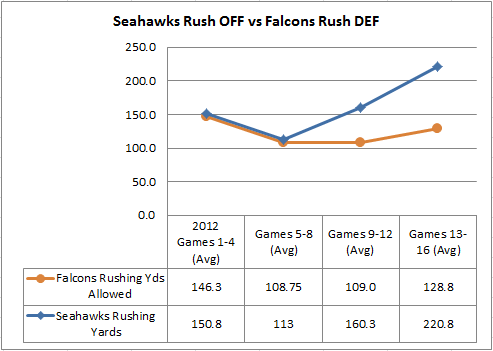 Atlanta ranks near the bottom of the NFL in rushing yards allowed and yards per rush. They are weaker in the middle of their defensive line than along the edges, and Marshawn Lynch excels up the middle. There will be plenty of talk about the Falcons receivers facing off against the Seahawks corners, but Seattle’s rushing offense vs. the Falcons rush defense very well could be the biggest match-up in the game, and the biggest mismatch.

Tony Gonzalez Should Be Seahawks Focal Point
Ryan loves throwing to his receivers. Julio Jones and Roddy White are outstanding athletes with great hands. They will make plays on Sunday, even against the Seahawks secondary, albeit fewer than normal. The player that will keep Pete Carroll and Gus Bradley up late this week is Gonzalez. The guy had 93 catches, nearly 1,000 yards and eight touchdowns. He is 6’5″, 247 lbs and can still make great catches above the defense. He is the guy that seems to make the clutch third down catch for Atlanta or the contested red zone touchdown.

The Seahawks have had success holding down strong receiver duos, but it is nearly impossible for the defense to take away the outside and the inside. Holding the Falcons under 20 points will be a yeoman’s task, largely because of this varied passing attack.

And You Thought The Redskins Had An Easy Schedule…
One of the things that really stood out with the Redskins was how rarely they had been challenged by a great team, a great offense, or a great defense. That showed up during the game with the Seahawks as Washington was dominated on all sides of the ball for three quarters of the game. Football Outsiders ranked the Redskins schedule as 15th-toughest in the league. Atlanta? They check in at 27th.

The Falcons only played three teams that finished the year with winning records. To their credit, they beat each of them by an average score of 28-13. That was aided greatly by a 34-0 victory over the 9-7 New York Giants. They also beat the Broncos 27-21, and the Redskins 24-17. Two of those three games were at home.

Atlanta’s vaunted passing offense has faced only one Top 10 pass defense (based on opponent passer rating), and only two of the Top 15 pass defenses. They won both of those games (vs. DEN, vs. ARZ), but both were close, and the passing game struggled in each. Ryan threw five interceptions at home against top-ranked Arizona, and managed only 6.1 yards per attempt against the 11th-ranked Broncos.

They faced three Top 10 rush defenses (four total games) and averaged only 73.5 yards on ground against them.

It is not all bad for the Falcons. Their defense, especially their secondary, has had success against high-powered offenses and passing games. Very few people realize the Falcons are the 5th-ranked scoring defense in the NFL, and fifth in opponent passer rating.

Key Tension Point
Atlanta has surrendered more than 24 points just three times all season, are 1-2 in those games, and could have easily been 0-3. Seattle has scored 24 points or more in four of their last five games, and six of their past nine games. The Seahawks are 8-1, including the playoffs, when scoring 24 points or more. 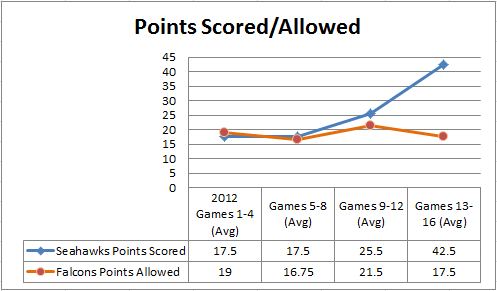 There is a strong correlation (0.53) between Falcon’s opponent rushing yards and opponent points. That would seem to bode well for Seattle.

Early Conclusions
Atlanta is not comparable to the Redskins, nor are they as tough as the 49ers, Packers or Patriot teams the Seahawks have already beaten. Seattle will face a focused, motivated and talented team that is fairly favored to win this game. Atlanta will need to play rush defense to a level they have not demonstrated they are capable of to hold down the Seattle offense. The Seahawks will need to be creative against a multi-faceted passing offense, and it would not be shocking to see the bandit defense make a rare appearance. The use of an extra safety and extra corners while reducing the defensive lineman and linebackers on the field could be a logical approach against a team that relies so heavily on their passing.

The biggest warning sign for Seattle would not be Atlanta moving the ball through the air, it would be seeing them succeed on the ground. Chris Clemons injury will get discussed for its effect on the pass rush, but the biggest difference between Clemons and Bruce Irvin is in defending the run. A Falcons team that is able to run and pass would be hard to beat.

The Seahawks, once again, are the team that has faced far tougher competition. They will have no rust, and enter the game brimming with confidence after they won their first road playoff game without the benefit of playing all that well. It very well may take 28 points or more to win this game for Seattle. Their offense is certainly capable of that. 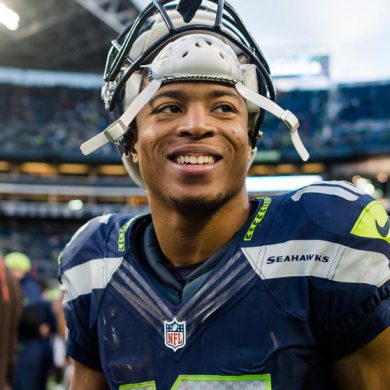