The Morning After: Seahawks Whup The Broncos 40-10

Logo Contest: The Morning After series runs everyday after a Seahawks game, and I’d like to add a logo to represent the series. The logo should incorporate both the name Hawk Blogger and The Morning After. Please send me your submissions at [email protected] before the regular season begins. The winner will get their name and Twitter handle or website attributed on each Morning After article. Below is the leading candidate thus far, but I will consider new submissions for the next two weeks.


It was 4:30PM on a Saturday afternoon before a pre-season game, and I was just arriving at the Eastgate Park & Ride to catch the 554 Express into town. These are the slow times, when you may see a few other die-hards waiting for the bus a few hours early for a game nobody will remember in a few weeks. They are slow no more. A few dozen fans were crowded at the bus stop, and when the bus arrived, it was so full that people were left behind. The driver took us by the Mercer Island stop even though we were too full to take on any more passengers, as if to taunt the poor souls left standing there as we whooshed by. Welcome to CrazyTown, USA, the new home of your Seattle Seahawks that figures to be a six-month party. The atmosphere was like almost any regular season game. Even the bars were overflowing and chanting. Seahawks fans were clearly eager to demonstrate their excitement, and the team did nothing to dampen their spirits. 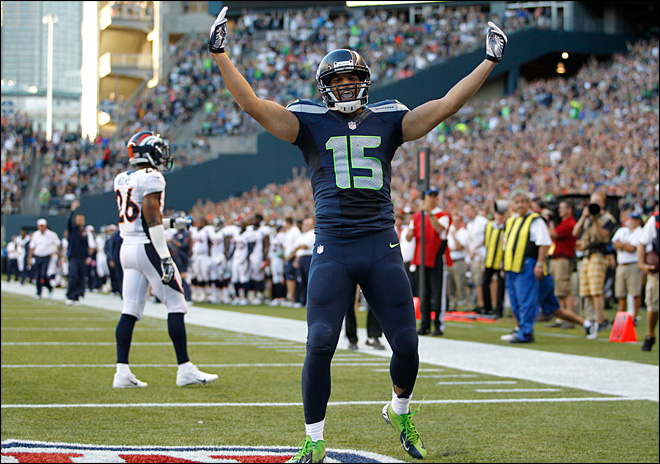 Peyton Manning is a master of his trade. Forcing him to go three-and-out on the opening possession was no small feat. It was fitting that the first series included a pass breakup from Brandon Browner and a tackle by Kam Chancellor. Both players, along with Bobby Wagner, had their fingerprints all over this game. Browner was credited with one forced fumble, but he caused at least two others that were mistakenly not ruled fumbles. Receivers were almost better off not catching the ball when he was defending. Chancellor collected 11 tackles, 8 solo, in one half of football. He and Wagner were primary reasons the Broncos could not move the ball on the ground, averaging only 2.7 YPC for the game. Wagner looked better than he looked all last season, which is saying something given he was the runner-up defensive rookie of the year. He was delivering devastating hits and attacking the line of scrimmage with a confidence forged through an off-season of growth and experience.

It was not all roses for the Seahawks defense, as Manning and Co. put up 180 yards of offense in the half and converted four of their first six third downs. They were a half-yard away from scoring a second touchdown when Heath Farwell knocked the ball free of Ronnie Hillman and Browner scooped up the fumble for a 106-yard touchdown return. Some fans will look at that as a lucky break. What those folks miss is that the Seahawks defense is built to force teams to take underneath plays, taking away the explosive play. That makes teams string together a ton of plays to march down the field. The odds of something going wrong, be it a penalty, a forced pass, or a fumble, increases with each play. The Broncos were on their 14th play of that drive when Farwell caused the fumble. The glass half-empty fan will focus on the 78 yards the Broncos gained on the first 13 plays of the drive. The glass half-full fan will focus on a Seahawks defense that will make opponents earn every yard, every inch, every millimeter.

Pass rush appeared to be a common point of anxiety from what I read on Twitter. Judging pass rush against Manning without Cliff Avril, Chris Clemons, Bruce Irvin and much in the way of rush schemes is tough. Manning is one of the toughest quarterbacks to sack in NFL history, as a percentage of pass attempts. Still, there was little evidence of individual players generating much rush on their own, which has to happen if this team is going to generate consistent pressure on anyone. Wagner did get a solid hit on Manning just after the ball was released, but there was little else to point out when the Broncos first team was out there.

Things changed quite a bit after Manning took a seat. Manute, I mean Brock, Osweiler was harassed from a variety of angles as the Seahawks finished with four sacks. Benson Mayowa got the start at LEO, and had a terrific effort sack when he dove to the ground and grabbed Osweiler’s foot. O’Brien Schofield had one of the forgotten great plays of the night when he sacked Osweiler, stripped the ball, and recovered the fumble. The jury is still out on the pass rush improvements, but I remain optimistic things will at least be better than last season.

Antoine Winfield did not appear to have a strong game at first glance. He allowed the touchdown to Wes Welker, and had some communication challenges with Richard Sherman that led to a big third-down conversion by the Broncos. Walter Thurmond had a strong game, batting down a pass on a crossing route. Winfield has yet to make his presence felt. He is not necessarily in danger yet, but he would be wise to give the team a few reminders about why they signed him and are playing him ahead of younger, cheaper alternatives.

Allen Bradford and John Lotulelei turned in a second week of strong performances. Bradford had two tackles for loss in his short stint and Lotulelei had one. Linebacker depth is becoming less and less of a concern after entering training camp with real question marks. It is worth noting that K.J. Wright was playing with a cast on one of his arms.

The offense acquitted itself far better than it did in the first game. The sharpness demonstrated in the training camp practices this week showed up in the game. Russell Wilson did a lot of damage in a manner befitting an elite quarterback. His efficiency was off the charts for much of the first half as he boasted a perfect passer rating until late, and still finished with a dazzling 141.3 rating. At one point, he was averaging 15.5 yards per attempt. He led the team to points on four of his five drives. It was the kind of performance that reminded many national viewers why the Seahawks quarterback should be feared. Shut down the read-option all you want. Seattle scored 33 points in the first half without more than one read-option play.

Sean McGrath had a nice game, with a couple big catches including a touchdown on a tipped pass that required some good concentration. Stephen Williams did his thing again with another long bomb from Tarvaris Jackson–who, by the way, bested Wilson’s rating at 141.4. Golden Tate and Doug Baldwin both had nice receptions, and Baldwin could have had another big one if the pass had been on target. Jermaine Kearse, though, stole the show with another touchdown reception and a 107-yard kickoff return for a touchdown. There is no longer any glory to be had for hyping Kearse. By now, everyone has seen what he is capable of. Consider that Sidney Rice did not play and Percy Harvin is out for a while. Remember when people questioned the Seahawks receiving corps?

The running game was not quite as promising. There were some good moments on the first drive where Robert Turbin did some damage up the gut. Not much happened after that with the first-team. Spencer Ware put on a good show with 54 yards on nine carries and 26 more yards on a couple receptions. He also got some reps at fullback.

A few two-game totals of note:

Off to Green Bay next week. Prepare yourself for plenty of talk about referees and how the Packers were robbed of a win by a single play. The starters should play into the third quarter, with plenty of chances for Golden Tate to score yet another touchdown. It should be about as entertaining as any pre-season game in recent memory.
Start typing to see results or hit ESC to close
softy real hawk talk russell wilson 49ers rams
See all results