The Royal BALTYs Strike Back 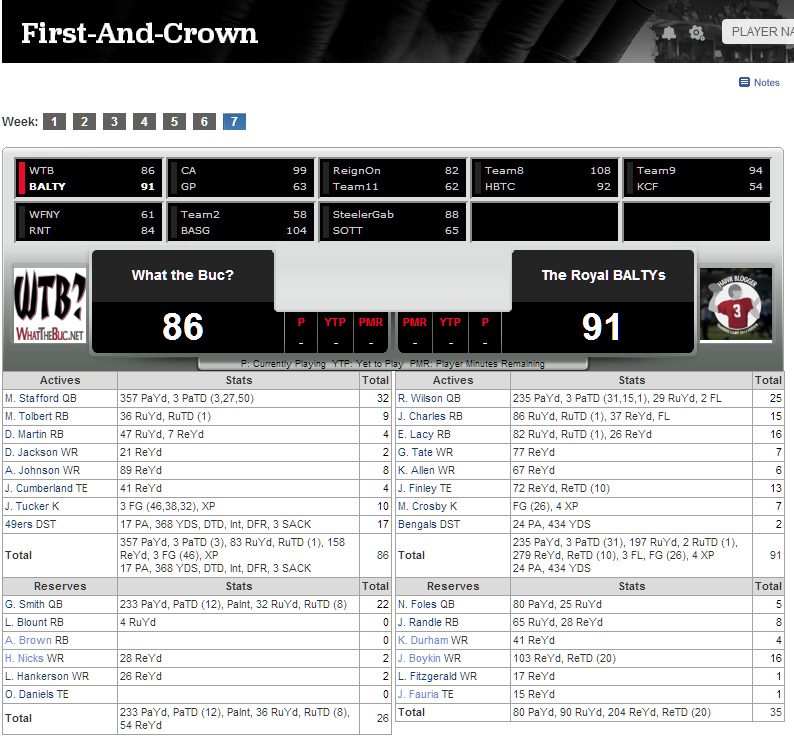 Reign on, indeed. After a dismal 1-3 start, the BALTYs are on a three-game tear at 4-3. Why should you care? Crown Royal is giving away prizes every week to the teams with the highest score that week, and prizes to the division winners and an all-expenses paid trip to Florida for a taping of a CBS football show, and I’m giving away any prize I win to my readers.
This was a crossroads week for the BALTYs as we made a major trade. Saddled with a feeble wide receiver corps all year, and a stable of strong RBs, the BALTYs have been trying to turn Reggie Bush, or even Jamaal Charles into a big return so that Eddie Lacy could get into the lineup and the rest of the team could be more consistent contributors. To give you some idea of the depth of problem at receiver, the team totaled 1 point between Golden Tate and Donnie Avery last week. Vincent Brown and Chris Givens were on the roster. This is a 16-team league, so the pickings are extremely thin.
We went hard after A.J. Green, but after a half-dozen variations, we finalized a deal that brought over Erik Decker, Jermichael Finley and Keenan Allen for Bush, Larry Fitzgerald and Charles Clay. At the time, it was a sell high, buy low attempt. The injuries at the Packers receiver spots seemed to create an opening for a big finish by Finley. Allen is in a similar situation in pass-happy San Diego with the injuries to their receivers. Decker is just a most consistent bet than Fitzgerald at this point, given the quarterback differences. The changes meant a lineup of:
Russell Wilson
Reggie Bush
Jamaal Charles
Golden Tate
Larry Fitzgerald
Charles Clay
would now be:
Wilson
Lacy
Charles
Decker
Allen
Finley
I also have been active on the waiver wire, picking up Jarret Boykin and Joseph Randle last week. It all looked brilliant for most of Sunday, and then the terrible news about Finley hit. Next man up. I added Mike James, Kendall Wright and Andrew Quarless this week via waiver. James should be a fine backup RB option the rest of the season with Doug Martin’s injury. Wright looks to be Jake Locker’s number one target, and Quarless steps into Finley’s role. I don’t know much about him, and was tempted to go with Joseph Fauria or Zach Miller instead, but I always choose upside, and if Quarless gets half the chances Finley did, he’ll be a solid starting TE.
So now I’m faced with a depth decision at WR for the coming week. Who would you start out of these three? Tate, Decker, Boykin. Decker would seem to be the clear must-start. Boykin and Tate have great match-ups this week. Boykin is in a pass-heavy offense, and it is unclear how Tate’s role will be affected should Percy Harvin come back. In fact, I was tempted to drop Tate in favor of Darius Heyward-Bey given the injury to Reggie Wayne, but I couldn’t pull the trigger. Something tells me Tate is on the upswing, and may even benefit from Harvin’s return.
What say you? Tate or Boykin?
We also dropped the disappointing Bengals defense in favor of a Saints defense that hosts the Bills this week. We may go week-to-week with defenses to find the best match-ups.
The BALTYs are two games out of first place in their division with six games left to play. The division leader lost Julio Jones, and should be vulnerable the rest of the way. We catch the team with the most points in the league this week at an opportune time, as Andrew Luck has a bye week and he has to play Carson Palmer. Here’s to hoping for a four-game win streak, and some prizes I can start to give out!
Start typing to see results or hit ESC to close
softy russell wilson real hawk talk 49ers cardinals
See all results
More Stories