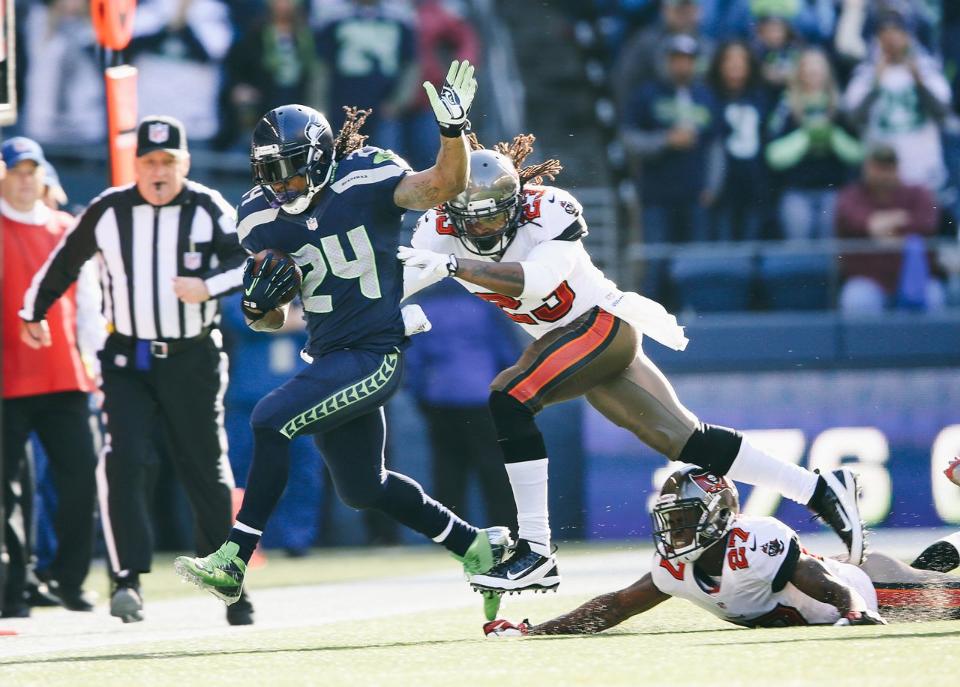 It was only a week ago that Seahawks fans were fretting about their offense. And for good reason. Their offensive line was a joke against the Rams. The play calling was bizarre. Marshawn Lynch was an afterthought and Sidney Rice was lost for the season. Lost in the embarrassment of falling so far behind a winless Tampa Bay team was an offensive performance that contained a variety of encouraging elements which may signal the start of a powerful offensive run.

Everything started with a return to their identity as a smash mouth running team. Seattle had allowed teams to psych them out of running the ball with extra men in the box. That stopped on Sunday. A Seahawks team that had completely changed their profile on first down plays to be roughly equal pass and run went back to pounding the rock on first down. Twenty-two of the Seahawks thirty-two first downs plays were runs. Tampa knew it was coming, and was among the best run defenses in the NFL. It did not matter. Seahawks rushers averaged a whopping 5.3 yards per carry on first down. Both Lynch and Robert Turbin, who had his best game of the season, averaged over 5.5 yards per carry on first down.

This allowed Wilson’s throws on first down to be that much more effective. He was 7-10 passing with a 9.2 yards per attempt average and a 92.5 passer rating on first down. He would have been even higher if he had not thrown that interception in the end zone late in the game, which came on a first down throw.

Seattle was gaining large chunks of yards throughout the afternoon. The Bucs had only allowed 12 explosive runs (12+ yard gains) all season before Sunday. The Seahawks collected a season-high seven in one game. They added seven explosive passes (16+ yards) for a total of 14 explosive plays, also a season-high. The only game where the team had more explosive passes was when the Jaguars came to town and they had nine.

A telling number was the four explosive catches Doug Baldwin and Jermaine Kearse combined to haul in. Rice had just six explosive catches all season. Baldwin not only collected a team-high six catches for 75 yards, but also did it with far more repeatable routes. His highlight reel catch along the sideline aside, Wilson was able to find Baldwin in open spaces within 10 yards of the line of scrimmage time and again on curls and stick routes. Rice never really got a chance to showcase just how talented he was during his time in Seattle, but the Seahawks offense may be better right now with Baldwin in his place.

The gains in the passing game and running game start with the unit more chided than any other on the team. Seattle’s offensive line followed up a performance that saw them yield seven-sacks with a zero sack effort versus Tampa. Wilson still got hit, and hit hard, but the sack shutout should not be overlooked. It was the first game since Week 8 of last season that the Seahawks had not surrendered a sack. Only three teams in the NFL this season have allowed zero sacks and averaged at least 5.6 yards per carry.

FACT: Only three teams in the NFL this season have allowed zero sacks and averaged at least 5.6 yards per carry in a game. Seattle is one of them.

That helped Seattle to more sustained drives than at any other point in the season. The Seahawks registered six drives of over 50 yards. They had not had a game of more than four such drives before Sunday. The Denver Broncos offense that is being talked about as one of the best in history, has only one game this season with more 50+ yard drives, and that is when they had seven versus the Cowboys when they scored 51 points.

Seattle’s opponent this week, the Atlanta Falcons, run out a defense that has given up the ninth-most 50+ yard drives, the third-worst opponent passer rating (100.5), the seventh-worst yards per carry (4.5), and in the bottom third in sack percentage. There will be no Darrelle Revis to take away one receiving option. There will be no Mark Barron or Lavonte David or Gerald McCoy. This a game where the Seahawks offense should absolutely expect to score 30 points or more. It would not be a surprise to see them explode into the mid-30s or higher.

The coaching staff appeared to have received the necessary wake-up call in the Rams game, and got the team back to the identity that suits them. Players on the offensive line and receiving corps have stepped up. This offense is ready to carry more weight. They need to do it again this week.