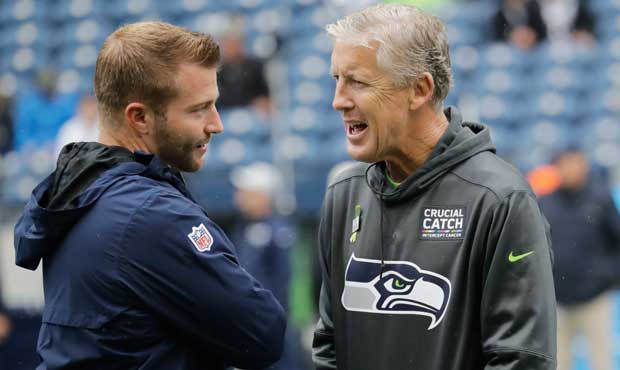 Admittedly, the answer to the title question won’t be known for a long time. The offense did not change radically with the hiring of Brian Schottenheimer in 2018, opting to keep the core of the playbook intact. Until Waldron speaks to the media, and the Seahawks go through training camp, mystery will surround the new offense.

The goal of this piece is not to say what Waldron will or will not change. The goal is to compare and contrast the Seahawks offense since 2018 to the Rams in the same time period, while Shane Waldron was the passing game coordinator for the Rams. The caveat being that Sean McVay was the play caller, and Waldron is an unknown in that area. On the surface, this hire appears to be well thought out. The hiring process was slower than last time, Waldron comes from an innovative coaching tree that now features a pair of NFL head coaches (Matt LaFleur, Zac Taylor) and a college head coach (Jedd Fisch).

The Rams passing offense has been up and down in the years that Waldron has been the passing game coordinator. This performance does not lie solely with Waldron, especially with a middling talent at quarterback, in addition to the fact that he was not the play caller. The Rams finished 5th, 14th, and 22nd in expected points added (EPA) per dropback in 2018, 2019, and 2020 respectively. For reference, the Seahawks ranked 4th, 11th, and 10th in the same window.

Enough about what happened though, let’s talk about the how. Prior to 2020, fans clamored for the Seahawks to open the passing offense and to “Let Russ Cook”. Much to the surprise of his critics, Pete Carroll allowed the offense to move to a pass heavy one, and it worked…for a while. The latter half of the season saw the passing offense struggle mightily. In his year end press conference, Carroll said the team needed to get back to running the ball more, and more effectively.

Taking a look at the Rams offense for the last three seasons, we don’t see a run heavy offense. These pass rates are adjusted to be in “neutral situations” where game script isn’t as big of a factor.

The Rams were above average in neutral situation pass rate for each of the last three seasons. Given Carroll’s comments, it’s fair to think that the Seahawks 2020 pass rate will more of an aberration than the new normal. As a first time offensive coordinator, it’ll be interesting to see how much control Waldron is allowed over the offense and how involved Pete Carroll wants to get.

Perhaps Waldron will be influenced by Pete regarding the run/pass splits, but the types of runs and passes will be his call at the end of the day. Early in McVay’s tenure, the Rams offense was almost exclusively 11 personnel (3 WRs, 1 TE, 1 RB). Since 2018 though, they have returned to the pack and nearly match the Seahawks in usage of 11 and 12 (2 WRs, 2 TEs, 1 RB) personnel.

There’s no denying that the Seahawks offense looked like a shell of its early season self toward the end of the season. One frequent criticism of the offense, and Russell Wilson specifically is his hesitancy in throwing over the middle. It’s no surprise then, that when comparing Wilson and Goff, we see that Goff threw much more in the middle of the field the past few seasons.

The blue parts of the map are where Goff targeted more frequently than Russ. Specifically in the short and middle (5-15 air yards) areas, it may be a point of emphasis for Waldron to make Russell feel more confident attacking the middle of the field and in the seams. We see some red in the deep part of the map though (25+ air yards), Russell Wilson excels at the deep ball.

Looking at the distribution of passes for the Rams coincides with the previous chart. The Rams and Jared Goff generally had a lower depth of target over the last few seasons compared to the Seahawks. Additionally, they threw less deep balls. Since 2018, 9.8% of the Rams passes were at least 20 air yards, the 5th lowest rate in the league. The Seahawks meanwhile were at 14.1%, the 4th highest rate in the league. We can’t answer for sure whether this is a scheme difference or solely a QB difference but the deep ball is one of Russell’s best attributes and it may be sorely missed if the deep passing rate falls towards the bottom of the league.

Despite running less than ever before (in neutral situations), the 2020 Seahawks finished just behind the 2014 team in terms of rush efficiency (EPA per rush), making it the second best in Pete Carroll’s tenure. Regardless, Carroll will have an emphasis this off-season on running the ball more effectively and more often. The Rams are a different team than the Seahawks, their wide zone scheme uses outside rushes more frequently than the Seahawks.

The 2018 Rams were extremely efficient when running the ball and one of the best teams of the decade in terms of EPA per rush. Since then, their dominant OL has fallen apart and their run game has suffered as a result. There could be some growing pains in teaching the OL a new scheme, but if it works, the Seahawks could repeat or even improve their 2020 rushing efficiency.

Another element of the Rams rushing attack are end arounds with the receiver taking the handoff. In 2020 alone, Robert Woods had 24 rushing attempts for the Rams, gaining an average of 6.5 yards. While he hasn’t been the greatest receiver, it is a role that suits David Moore quite well given his run after the catch ability.

With two head coaches around the league and now an OC, the McVay tree is growing rapidly. Matt LaFleur has experienced tremendous success in Green bay, while Zac Taylor has had a rocky start in Cincinnati but Joe Burrow played decently in his limited season so there is hope there. The reality for the 2021 Seahawks is that Shane Waldron and Pete Carroll need to figure out how to get Russell Wilson back to playing like himself. In his second season as head coach, Matt LaFleur has helped bring Aaron Rodgers back into MVP form, the Seahawks will hope Waldron can do the same with Russell Wilson.