Defensive backs take part of their traditional pregame huddle before taking the field for warmups.
Mike Sando wrote a terrific article today about just how badass Kam Chancellor is. Sando details a series of separate occurrences demonstrating just how much of an intimidating force Chancellor is on the field. My favorite of these came in the last game of the season versus the Rams when QB Kellen Clemens was scrambling in the fourth quarter and caught Chancellor out of the corner of his eye. He flashed his hand in the air in Chancellor’s direction to wave him off as he quickly dropped into a slide. Chancellor called it a “smart decision,” while the Seahawks sideline was in hysterics. That is the kind of team Pete Carroll and John Schneider have built. That is part of why they are so fun to cheer for. I decided to have a little extra fun and grade who exactly is the biggest badass on the roster.

As is always the case with these indexes, there is no scientific or statistical evidence to back it up. It’s just fun. That said, I’m pretty partial to my list, and would love to hear how your list might compare.

Being a badass is about more than just being a big hitter. Winston Guy laid a big hit on Stephen Williams during the training camp scrimmage this year. It was more chicken shit than badass. There is something intangible about men who intimidate other men. You can be strong and big, but not be as tough as a much smaller man. One of the great parts of football is seeing the difference between the predators and the prey.
I picked out a few criteria for what I think makes a badass football player, and weighted each category in order to come up with an index score. I only graded a handful of players off the current roster that I thought merited consideration. Not appearing on the list doesn’t mean the player is weak. It just means they didn’t jump to the top of my mental list of intimidating Seahawks.
SIZE – How big is the guy? (15%)
APPEARANCE – Does he look mean? (10%)
DEMEANOR – Does he act mean, tough? (20%)
HITTING – How many hours in the cold tub for his opponents after playing him? (25%)
ALLEY – If you met this guy in an alley at night, how would you like your chances? (10%)
GREATNESS – A player has to be good at what they do for any of the rest of it to matter. (20%)
To the results! 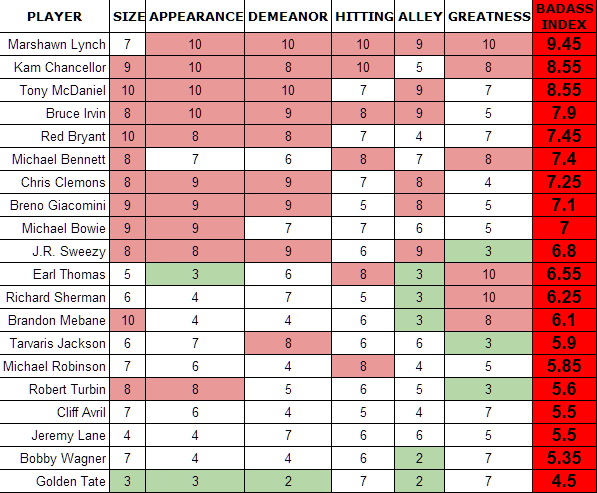 As much as I love Chancellor, it did not surprise me to see Marshawn Lynch top the charts. Kam is a badass hitter, but he’s such a nice guy and so clean-cut. He really gets hurt by his alley score because my guess is he’d probably be just as likely to let you walk away as he would be to knock you down. Have you seen that smile? This guys seems pretty chill off the field. Thankfully, he is anything but on it.

A surprise to be so high on the list might be Tony McDaniel. I watched that guy all through training camp, and let me tell you, he is a mean man. He looks mean with his helmet off and with it on. This is just about the last guy you want angry with you. And he’s played damn good football this year to boot.

Bruce Irvin may also be a surprise, but don’t forget how much he has come through. There may not be a tougher guy on the team in terms of where he has been. He gets held back on the Badass Index by his lack of dominant on-field performance so far. Fix that, and we have a serious contender for the crown.

Michael Bowie is one to watch. He played with great toughness this year, and is guy I have high hopes for both as a player and as a badass.

He may want to be careful, though, because the guy whose job he may take, J.R. Sweezy has a history of pretty crazy behavior back in college that earns him some high marks here.

A lot of the guys lower on the list are either too small or too nice to be high-ranking badasses. Even so, they all earn a spot on the list. Not everyone can be #1.