the soccer stadium with the bright lights
Twenty-four hours from now, we will be hours away from waiting hours for the Seahawks to more-than-likely trade out of the first round. Does the NFL have us by the unmentionables or what? You will see many pre-draft pundits talk about “needs,” but let’s try to dig a little deeper for our Seahawks and examine their most used personnel groups to see where the actual gaps may be, and how that could foreshadow John Schneider’s draft picks, whenever he starts making them.

Seattle primarily ran with 11 personnel last season. That means for about 40% of their snaps, they had three receivers, one tight end, and one running back on the field. The following depth charts are not exhaustive (there are a bazillion guys on the roster right now), and are my read of where players sit. Actual depth charts will not be released publicly until training camp. Still, these are not far off.

The most pressing questions are at right tackle and split end. Seattle has answers for both positions, and could go into the season without adding other players at either position, but Schneider and Pete Carroll will want to add to the pile to ensure the team is not just settling. Many draft analysts have the Seahawks taking a guard in the first round. I have guard as a less significant gap than either tackle or split end. A starting guard combo of Alvin Bailey and Michael Bowie would be a significant upgrade over what the team ran out there last year. And the team has James Carpenter and J.R. Sweezy there as well, not to mention Lemuel Juanpierre and Jared Smith. Smith, by the way, looks enormous right now. He is a massive human, and I’ll be interested to see if he makes a name for himself in camp.

We know very little about Caylin Hauptmann except that the team liked him enough to carry him on the 53-man roster almost the whole year. They did that with guys like Mike Person and Breno Giacomini in the past, and then vaulted them up the depth charts. One of Bailey, Bowie and Hauptmann may be the answer at right tackle. The line might better off if they can find a talented rookie who could eventually take over there, and allow the great athleticism and power of Bailey and Bowie patrol the middle.

After 11 personnel, the next-most used grouping on offense was 22, which features one receiver, two tight ends and two running backs. 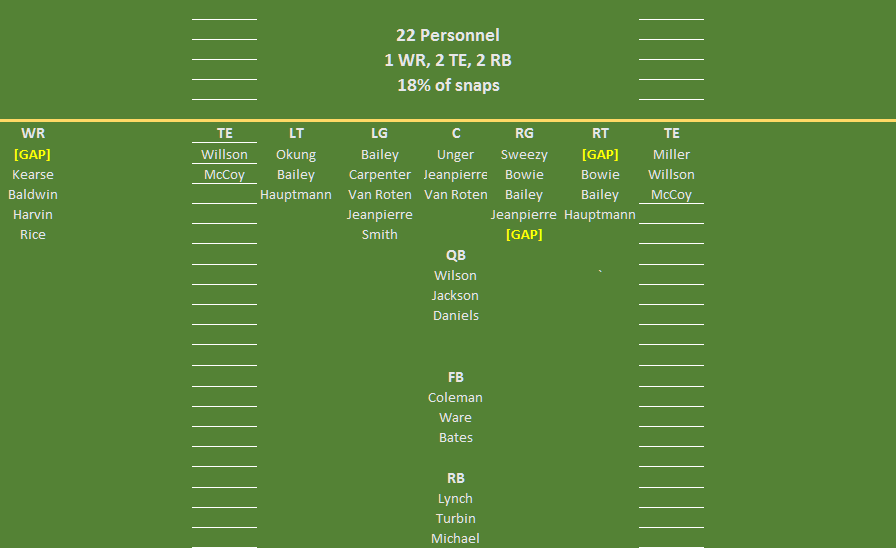 The gaps are largely the same here. It is possible the team will add more to the pile at fullback, but they have some options there, and may even explore using a guy like Pryor at H-Back, or using Luke Willson more there. They may also want to add another tight end, but it is definitely not a gap. They have the opposite of a gap at running back, with Marshawn Lynch, Robert Turbin, Christine Michael, Spencer Ware and Derrick Coleman all capable of getting snaps at tailback. That surplus may be used to try and find some extra draft picks in a running back-thin draft class.

It is not obvious at this point who the single receiver will be on the field in 22 personnel. Harvin is the biggest name, but it’s not clear he makes the most sense for the routes run out of this grouping. Kearse is probably the leader for now.

It is harder to track down exact snaps in various defensive personnel, but the Seahawks played the vast majority of their snaps in either base or nickel. The main difference there is base defense has three linebackers and two cornerbacks on the field and nickel has three cornerbacks and two linebackers. There is also some switching of the defensive line responsibilities. The nickel line is built to rush the passer, where the base defense must first be capable of defending the run, but also be versatile enough to pressure the quarterback. 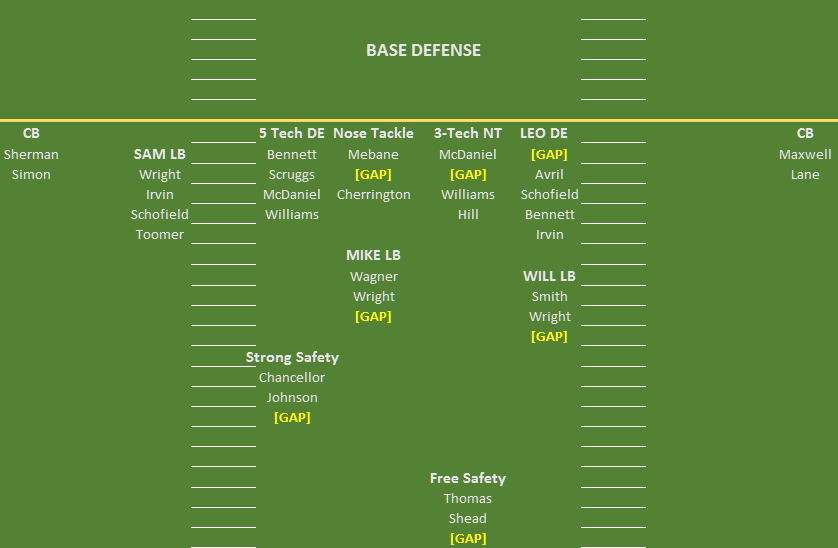 Seattle could stand to add at pretty much every position on defense. The roles with the most depth are 5-tech defensive end (ironic, since so many have the Seahawks looking for a “Red Bryant replacement”), and stongside or SAM linebacker. By far the biggest question mark is who starts at LEO. Cliff Avril is the name everyone knows, but he was very public about his lack of comfort with rushing from the weakside of the line versus the opposing left tackle. You could play him at LEO, and flip him to strongside rusher on nickel, but you may lose some of his effectiveness. O’Brien Schofield was a good addition here who could start in a pinch. It would be ideal if the team thought Bruce Irvin could go back to this role so that K.J. Wright could move back to his best position at SAM, but Dan Quinn has not been publicly in favor of that so far.

Finding edge rushers is tough. Maybe Benson Mayowa is ready to burst onto the scene. Until that is proven, LEO is the biggest question mark, and should get some reinforcements in the draft if the Seahawks can find a player or two they like. Nose tackle is the next most pressing need. The depth behind Brandon Mebane is paper thin (well, Dewayne Cherrington is like 320 lbs, but you get my point), and the team needs to start grooming his replacement.

Clinton McDonald was that guy last year, and he grew to play a role on nickel as well. 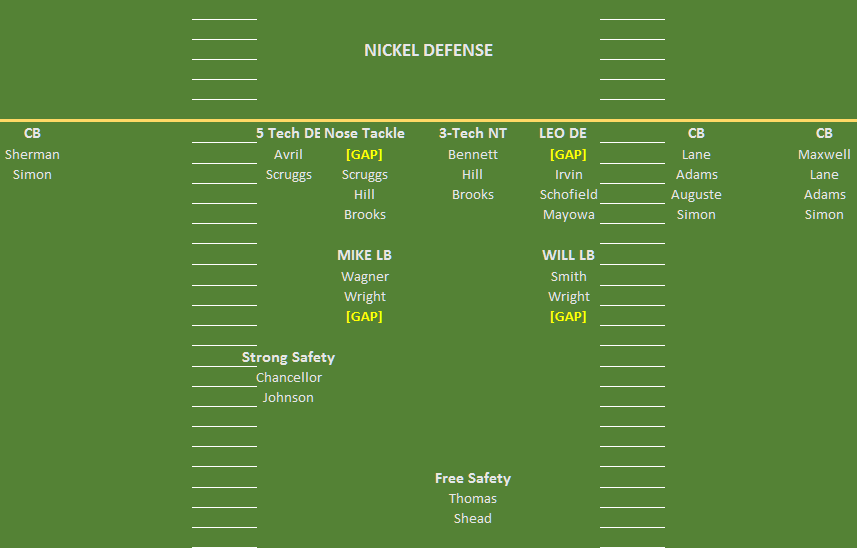 It is not clear who will step in for McDonald as the nickel defensive tackle partner for Michael Bennett. It is probably Greg Scruggs for now, but it needs to be someone who is still very capable of holding up against the run, and Scruggs is less proven at that, especially on the inside. There is also a question of who rushes opposite Avril when the team goes to nickel. Irvin is the best bet, but that is a key question for a team that featured one of the best pass rushes in football last year.

The quiet gap is at WILL, or weakside, linebacker. Both Malcolm Smith and Wright are free agents next year. The team needs to add to the pile at linebacker in general, as they do not have a great backup at middle linebacker if Wright leaves after the season. The nice thing about linebacker is that you can find them in any draft, they can contribute immediately, and often are great special teams players.

I don’t currently have corner listed as a gap, but a case could be made that they team should add more there. Safety is a spot the team needs to address as Jeron Johnson is an unrestricted free agent next year and Chris Maragos left. DeShawn Shead is a quality prospect, but they need more options to strengthen that position.