So many factors contribute to which players are chosen to fill out the bottom of an NFL roster that being exactly right is pretty darn tough. Special teams play, use of injured reserve and PUP to stow away players, a player coming free from another team that is higher on the value chart than what the Seahawks currently have available, and the ever-present injury bug can all play a role. Last year, I incorrectly expected the team to keep 4 running backs instead of 5, 3 tight ends instead of 2, 7 linebackers instead of 8 and 6 cornerbacks instead of 5. Of course, the team realized they made a mistake with the tight end decision after one week and added Kellen Davis right away. And looking at the thin cornerback depth this year, and the suspensions that happened last year, they might have been wiser to keep an extra corner around. It would be nice to have a Will Blackmon on the roster.

History is a valuable reminder in these exercises of what position numbers the team actually chooses: 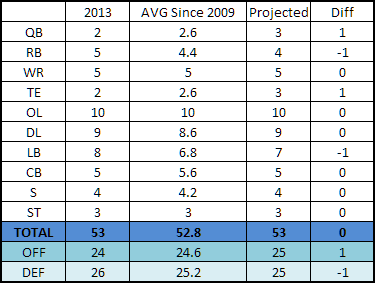 I have the team keeping three quarterbacks, one less running back than last year, three tight ends, and one fewer linebacker. That leads to an even 25/25 split among offense and defense.
Here are the projections in more detail:

If you add up all the locks and the high confidence players, you end up with 48 names. That means five spots are open for the 18 bubble players I highlighted. I expect one of those to go to Terrelle Pryor. One will go to another cornerback, either A.J. Jefferson or Akeem Auguste. One will go to a linebacker, either Mike Morgan or Korey Toomer. One will go to a running back, most likely Derrick Coleman. The last spot will go to a wide receiver. Right now, I have Kevin Norwood going to the IR (designated to return), and likely Ricardo Lockette grabbing the last spot.

That means Phil Bates and Bryan Walters would be very tough cuts. This roster would also not include Benson Mayowa. Stephen Schilling would be on the outside looking in as Lemuel Juanpierre, Alvin Bailey, and Caylin Hauptmann can provide interior depth as needed. Gary Gilliam is just a more valuable player than Schilling due to his youth and upside.