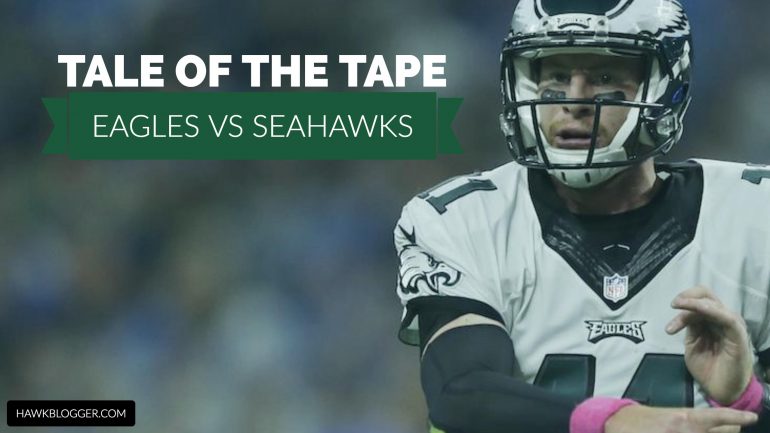 Tale of the Tape — Watch Out for Eagles Special Teams

You might think life gets easier after playing the consensus best team in football on the road. This is not one of those seasons for the Seahawks. Philadelphia, despite their 5-4 record, is as tough as any team Seattle has faced this year. They feature a top-notch defense and a special teams unit that is almost impossibly dangerous. The Seahawks now high-flying offense will be tested, but the game may swing on the advantage the defense has over a scuffling Eagles offense.

Don’t look now, but the Seahawks offense has scored 31 points in two straight games, and is averaging 27.3 points per game over the last three. Russell Wilson just set his career high for passing yards and Doug Baldwin just caught three touchdowns. C.J. Prosise emerged as a threat and Thomas Rawls is due to return from injury this week. There is plenty of reason to be bullish on the prospects of the Seahawks offense. Except, one thing.

The Eagles defense is damn good. Far better than what the Seahawks faced against New England or Buffalo. The last time the Seahawks faced a defense this good was when they scored 6 points in Arizona in five quarters. This game represents a true test of just how far this offense has come. Philadelphia has twelve players on their team with at least one sack. Brandon Graham (5.0), Fletcher Cox (4.0), and Connor Barwin (4.0) lead the way. Cox is the jewel of their line. He is equally adept at disrupting the run game and pressuring the passer. Seattle has struggled with disruptive linemen all year, but slightly less so on the interior of the line. They do a great job of getting off the field on third down (5th in the NFL), due in large part to their pass rush.

Teams that do manage to get down the field, usually settle for field goals. The Eagles rank 3rd in the league in red zone defense.

Their linebacker trio of Mychal Kendricks, Jordan Hicks and Nigel Bradham are fast and make plays. Hicks excels in coverage, leading the team with 8 passes defensed, and could see duty shadowing Prosise out of the backfield as well as Jimmy Graham.

One place the Eagles have struggled is in run defense. While ranking a respectable 13th in rushing yards allowed, they are a dismal 24th in opponent yards per carry. Seattle showed real progress in that area against the Patriots, and are welcoming back Rawls into the mix. This is not likely the team where the Seahawks will dominate via the run, but there is reason to be confident that they can get some productive yards on early downs to set up more manageable third down situations.

Prosise is also still fresh enough that the Eagles have little idea how Seattle intends to use him. He was an impact player in his first start. Expect the team to extend his role further this week.

Starting cornerback Nolan Carroll left the last game with a concussion and did not practice today. The team is already thin at corner, and would need to rely on inexperienced substitutes if Carroll does not make it back in time. Seattle is successfully involved at least four receivers in the pass game lately, and Tyler Lockett is coming on strong. They have the receiving depth to exploit a depleted Eagles cornerback crew. Should Philadelphia overcompensate by providing more safety help to their corners, that will open the door for more one-on-one match-ups for Graham to exploit.

There was a time, early in the season, when the Eagles offense was pretty decent. It has struggled in recent weeks as rookie quarterback Carson Wentz has regressed a bit. It is not often that a rookie quarterback has a good day against the Seahawks defense, especially in Seattle. The Eagles have struggled far more on the road this year as well. The Eagles biggest advantage above is their ability to take care of the ball. The more interesting area to explore comes in the run game, where they feature a dynamic pair of runners in Darren Sproles and Ryan Mathews. Philadelphia will need to have some success running the football if they hope to compete in this game.

The Seahawks have been struggling to shut down the run of late, even though their opponent yards per rush is great. This game would seem like the perfect time to really gear up to stop the run, so the Eagles are forced to rely more heavily on their rookie quarterback.

It is worth noting that the Eagles are tops in the NFL in time of possession. That may be as much to do with their defense keeping opponents off the field as anything happening on offense, but the commitment to the run game definitely plays a role.

Did I mention the whole rookie quarterback thing? Wentz started out quite strong, but has faded. He posted passer ratings over 100.0 in three of his first four games, but has not done it again since. His highest rated game in the last five was against Dallas (91.4), and they are near the bottom of the league in pass defense. Minnesota is the closest comparable to the Seahawks defense that Wentz has faced, and he posted a 52.4 rating with 138 yards, 4.9 yards per attempt, and 2 interceptions. This Seattle team just held Tom Brady without a touchdown on his home field. Wentz would figure to be in trouble in Seattle this Sunday.

Seahawks fans should be thrilled to see the 32nd ranked third down offense roll into town. The Seahawks defense has had trouble getting off the field lately. Getting Kam Chancellor back helps. The pass rush, now bolstered with newcomer Damontre Moore, could cause all sorts of trouble on an already troublesome third down for Philadelphia.

This is normally the quick bit at the end noting Lockett can be a difference maker. Not so here. Well, Lockett can still be a difference maker, but the real story is the Eagles return game. It is off the charts dynamic. I expected to see that their kick return prowess was due to Josh Huff, who was recently released due to off-field issues, which would give reason for optimism. Huff definitely played a role, but Kenjon Barner and Wendell Smallwood appear to be just as dangerous.

Consider that three of the last five kick returns went for over 30 yards. No wonder they lead the league in kick returns, already boasting two return touchdowns. They also rank third in punt returns. This is easily the most dangerous return team the Seahawks will face all year. Key players will be guys like Neiko Thorpe and Dewey McDonald on the coverage units. They will need to have a sharp focus to keep the Eagles special teams from giving the offense short fields and extra points.