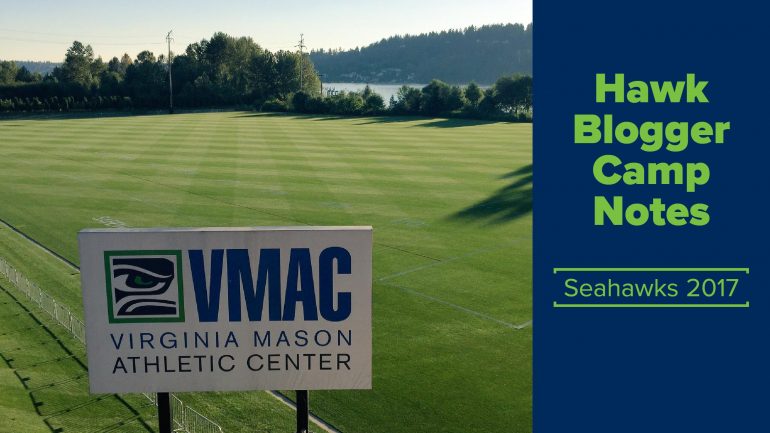 As I mentioned yesterday, the team is spending a lot more time in team drills than in previous years. They start practice without helmets in full 11v11 running through different sets. I wondered yesterday if part of the goal there was to improve on pre-snap penalty problems on both sides of the ball. If that is the goal, they have a long way to go. After a relatively penalty-free Sunday, today’s practice was marred by repeated false starts. I counted at least six, and there may have been more. Overall, the offense struggled to move the ball and find any rhythm. The team was unable to overcome such mistakes last year, and they have yet to prove they are good enough to do any better this season. Swapping in different offensive linemen on nearly every snap cannot be helping. Let’s hope the team settles on a rotation there soon and gives those guys the reps they need to eliminate needless negative yards.

Seahawks second year lineman Germain Ifedi has gotten stronger over the offseason. He and George Fant are huge tackles. The former first-round pick had trouble much of last year as a guard in pass protection, and the early evidence is that may be a bigger problem with his move to right tackle. Cliff Avril repeatedly whipped Ifedi around the edge for what would have been sacks if tackling was allowed. It was not once or twice. It was every time I watched Avril face Ifedi in a pass rush situation. Now, this was without pads, and there are surely other factors that make this less than a reliable indicator of how he will perform in real games, but it was not a good look. His feet were slow, as were his hands. I question whether he will be able to move well enough against any speed rushers on the edge. Ifedi may be worthy of the gamble if he is a monster in run blocking, and the threat of the run would help slow some pass rushers. My current best guess is this will be a significant problem for the offense.

What about Ethan Pocic?

Too early to tell. Pocic is the second string right tackle, but he is going against second and third string rushers. Avril is a litmus test. He has made many a tackle look foolish. Let’s see 1v1 pass rush drills and I will have a better answer. Of course, that assumes the coaching staff will put a premium on pass protection, which it has often prioritized below run blocking.

On to more positive news…it was interesting that Terence Garvin stood out on the day when he stepped backwards in the depth chart. Michael Wilhoite took starter snaps at SAM LB, most likely indicating the team sees that as a very close competition and will rotate daily. Garvin was all over the field today. He stepped in front of a Russell Wilson throw in the flat and nearly picked it off. Two plays later, Wilson lofted a ball 40 yards downfield to a seemingly open Alex Collins along the right sideline, only to see Garvin close and jump with his arm outstretched to tip the pass away. Impressive. Garvin is young, quick, and instinctive. I’m buying. By the looks of it, he and Wilhoite give the Seahawks depth at linebacker they have not had since Malcolm Smith left for Oakland a few years back.

I have noticed a new ritual for Wilson when he misses a throw he expects to make. He immediately calls for another ball and the intended receiver re-runs a partial version of the same route so that he and Wilson can complete the pass. It is an old performance psychology trick. Better to leave your mind with the mental image of success than failure. Details matter.

Alex Collins has come to play

Alex Collins was much maligned by certain segments of the Seahawks fan base last year. Some of that was fair as Collins was mostly uninspiring as a running back as a rookie. He looks like a completely different player so far this year. He is moving faster than at any time last season, and faster than most other players on the field. He is going hard on every single snap, and showcasing some very nice route-running and receiving skills. I saw him pluck a ball out of the air that was over his head while running full speed down the sidelines. Many receivers struggle with that play. He will have a hard time cracking the lineup for carries, but guys who play like this have a tendency to find their way onto the field. We won’t really know what the team has until the first preseason game. Oh, and he also looked great returning kicks. The more you do…

I hyped Grayson in yesterday’s notes. He had a tough day today. He ran a nice route to break open inside, but dropped the pass that hit his hands. He also had a lot of trouble catching kickoffs during return practice. I counted three fumbles. His loss was J.D. McKissic’s gain. McKissic has a similar build and made his catches today while looking the most explosive of any returner. He remains a sleeper to watch. Grayson still has unique speed, so his development remains worth watching. The rotation here was pretty reliably:

I saw little evidence to suggest Griffin or others were pushing to move up in the rotation, but it’s obviously only day two.

It was interesting to see how the team was using Bradley McDougald as a sub for both Kam Chancellor and Earl Thomas. It was particularly intriguing to see McDougald and Thomas on the field at the same time. That is a speedier duo, which makes me wonder if it will be better in certain matchups. Delano Hill is the clear fourth safety, who comes in when both Thomas and Chancellor sit. Tedric Thompson is fifth. Thompson has looked fine, but he is looking up at the depth chart.

Players who caught my eye

Lucas was on the practice squad for part of last year. He has made a number of nice catches through two days. He had at least four yesterday, and a couple more today. He moves well, but I don’t see anything that makes me think he can challenge the guys ahead of him yet.

Darboh had a couple nice catches today and just has the look of a guy who quarterbacks will find downfield. He is not very sudden, but appears to be fast. My early guess is he is a fifth receiver this year and mostly contributes on special teams. There is little reason to rush him, and he has not flashed “demand snaps” sort of ability thus far.

Davis is built to be a running back with a low center of gravity and enough bulk to bull his way through traffic. He is right behind Collins in terms of effort on every snap. His odds are super long to find a place on the roster, but it won’t be for lack of trying.

Lane looks as smooth and confident in coverage as I have seen from him. I can see why the coaches were heaping praise on him during the offseason.

The undrafted free agent had a great pick-6 today that had the whole defense running down the sideline with him to the end zone.

Reece got some snaps at running back, and looked darn quick for an old man. He appears to have plenty left in the tank.

Moore has not wowed me yet, but he is making his fair share of plays.

I mentioned that I don’t see Smith as a legitimate option at linebacker yesterday, and nothing has changed on that front. He is slow-footed and clumsy in space. I was, however, impressed with him rushing the passer during team drills. He put a beauty of a swim move on left tackle Robert Myers for what would have been a near-instant sack. That’s a promising sign.

Jones looks big, but not in a good way. I would bet he reported to camp well overweight. There have not been chances for him to make plays in padless practices, but my best guess is he is going to struggle to play to his potential at his current weight.

You would have hoped that the second-year player would build on what was a highly efficient rookie year where he made the most of every snap he got. That has not happened thus far. He has been mostly invisible through two days, and the one time he had a ball thrown his way today, he dropped it.

Is seems to happen every year around this time. I watch the Seahawks defense and think to myself, “holy cow, these guys are good.” The starters are not only some of the best players at their positions in the game, but they are incredible professionals. They communicate effortlessly and adjust telepathically. The combination of talent, attention to detail, and longevity is likely something we will never again see in Seattle. Savor it.