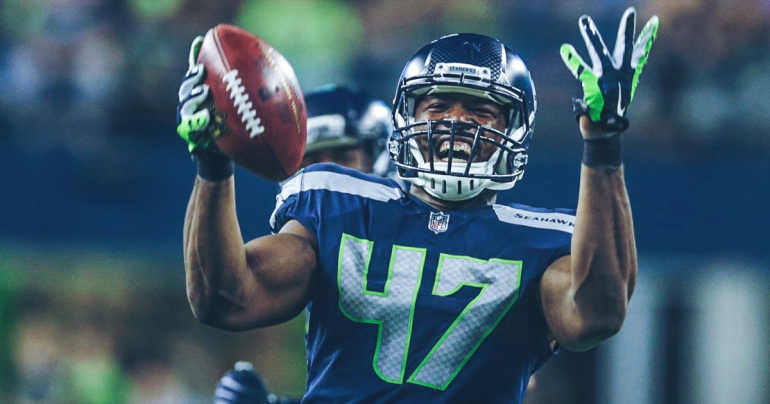 Through two preseason games, David Bass has featured heavily for the Seattle Seahawks in their second team defensive rotations. The little known Bass’ sudden relevance has caught some of even the most ardent Seahawks fans off guard, so lets start with a quick review of his career to date.

Bass graduated from Missouri Western State and entered the NFL draft back in 2013. He was drafted in the 7th round, 233rd overall, by the Oakland Raiders. Bass would not make it through training camp with the Raiders, getting waived on August 31st of 2013. Bass was then claimed by Bears, and would go on to be a minor contributor for Chicago over the next two years. He racked up 2 starts, 4 sacks, and 1 interception before being waived by Chicago shortly before the start of the 2015 season. Bass would again be claimed off waivers, this time by Tennessee, where he added another start, 1.5 sacks, and another interception to his resume. That brings us to this offseason, where he was signed by Seattle as a free agent for $775k.

Coming out of college, Bass’ athletic profile was roughly as modest as his stat sheet. The key drills for defensive ends are 3-Cone, an agility indicator, and the 10 yard split, broad jump, and vertical jump, each indicators of explosiveness. At 6’4 and 262lbs, Bass was a mixed bag, excelling at the agility drills but underwhelming at the explosion drills.

Nothing about his resume points to Bass being much more than training camp filler but, as mentioned earlier, he appears to be carving out a role for himself. In Seattle’s first preseason game, against the Los Angeles Chargers, Bass repeatedly got to the quarterback.

Bass was awarded half a sack on this play. He absorbs the crack back block from the wide receiver, and momentum to rip through the offensive tackle to the inside.

On Terrance Garvin’s pick six, Bass transitions speed to power on an edge rush and drops the left tackle into Clemens’ lap.

And on Clemens’ second interception, Bass clubbed and ripped his way past the left tackle to record a QB hit. Getting after the quarterback is obviously key for a defensive end, but Bass showed more than just past rush against the Chargers.

More David Bass, lined up at end here anchoring against a double from the OT and TE at the point of attack. https://t.co/zf6wqDtruO

On this play, Bass takes on a double team from both the left tackle and tight end on a run. Bass not only anchors down and doesn’t give up ground, he keeps his left side clean as the tackle pulls into the second level leaving himself in position to make a tackle had the running back cut inside the tight end.

Seattle has clearly recognized Bass’ ability to play stout against the run. In their second preseason game, against the Minnesota Vikings, the Seahawks experimented with playing Bass at defensive tackle.

On second and long, Seattle runs out a nickel subpackage that has Marcus Smith and Casius Marsh at defensive end, with Naz Jones and David Bass lined up as defensive tackles. Bass shoots the A gap, dips his shoulder, hurries the throw, and gets a hit on the QB for good measure.

Bass is again lined up at defensive tackle, this time beating the guard to the outside and forcing help from the offensive tackle. Marsh gets a free lane to the QB, but the ball is already out.

Needless to say, this versatility could be extremely valuable. While cracking a rotation already filled with Bennett, Avril, and Clark will likely be difficult, Bass looks capable of filling in at multiple spots to give those three some valuable rest. His ability to play alongside Marsh and Smith, who he’ll be competing for snaps with, should also help him see the field should Seattle carry him on the regular season roster. With the starters expected to play into the third quarter tomorrow against the Chiefs, we should get an idea of the kind of role Seattle is expecting Bass to play.