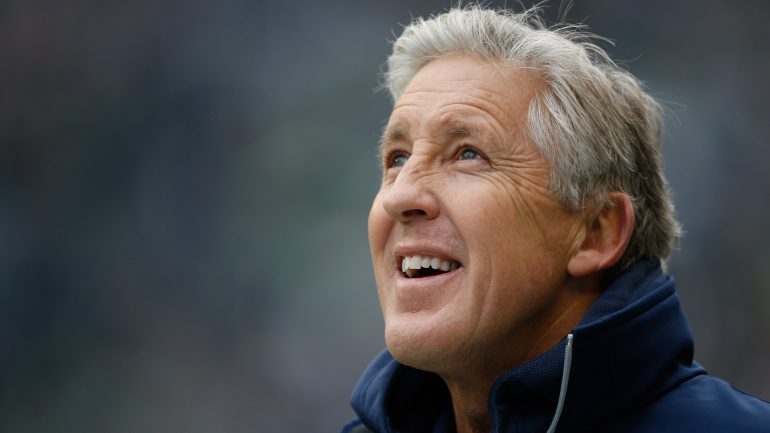 SEATTLE, WA - DECEMBER 29: Head coach Pete Carroll of the Seattle Seahawks looks on during the game against the St. Louis Rams at CenturyLink Field on December 29, 2013 in Seattle, Washington. The Seahawks defeated the Rams 27-9. (Photo by Otto Greule Jr/Getty Images)

It was the year of Facebook, Angry Birds and Team Coco. The living dead and the undead stalked television and film. The gang from “Glee” revitalized the American musical, while “American Idol” self-destructed before our very eyes.

Existence ended on the island of “Lost” — and continued, for better or for worse, on “Jersey Shore.” The iPad gave Apple a boost — as if it really needed one. You had to fear the Beard and fend off the sounds of the vuvuzela. Also, it was hard to turn on the television without seeing a member of the Family Palin. And what about Tiger Woods return to golf at the Masters? It was his first competition in nearly five months.

Those moments and others defined our popular culture in 2010. However, in the sports heavenly body of 2010: If you asked any Seattle Seahawks fan now, in 2017, looking back they would offer as a rejoinder the hiring of Pete Carroll.

After the Mike Holmgren era ended in Seattle, the Seattle Seahawks hired their seventh head coach in franchise history, hometown favorite, Jim Mora. He only lasted one season with the organization, which he finished the season 5-11, after losses in the final four games by a combined score of 123-37. He became the first Seahawks head coach to be let go after just one season. After back to back losing seasons it felt like the team was on a decline. The Seahawks were in trouble. It was sleepless in Seattle as fear crowded the air for this beloved team and was headed to its destination to non-fulfillment.

The Seahawks were used to winning at the helm of great coaching. Mike Holmgren was going to be hard to replace. Holmgren’s resume was as impressive as any. In his 17 years of coaching the Green Bay Packers and the Seattle Seahawks, he finished his career with a combined winning percentage of .592 in the regular season, .542 in the playoffs, two Super Bowl appearances, winning one, three conference championship appearances and a total of eight division titles. How do you follow that?

What the Seahawks needed in terms of coaching was experience, success, a great mind-set, and someone who would make an immediate impact if they wanted to get back to their winning ways. In 2010 they went on and hired the most attractive name in team history since Mike Holmgren, Pete Carroll.

Carroll brought 18 years of NFL experience and 19 years of collegiate experience with him to Seattle. Coach Carroll’s first head coaching gig in the NFL was in 1994 with the New York Jets where he got off to a 6-5 start, but in Week 12 the famous Dan Marino’s “clock play” happened. It has immortalized in what came to be known as the “Fake Spike Game.” That fake spike became a Miami Dolphins game-winning touchdown. Carroll would finish the season losing the rest of his games. He only lasted one year with the team.

Two years removed as head coach, Carroll took a job as the defensive coordinator with the San Francisco 49ers. Carroll in red and gold? Weird, I know. However, Carroll’s two years with the 49ers was successful. While there, his defense was in the top five in terms of points allowed. The 49ers allowed only 16 points a game in those two years.

His success in San Francisco landed him a second opportunity to manage a team in the NFL. The New England Patriots gave him that chance where he went on and never finished with a losing record in the three seasons with the team. Even with the somewhat success he brought to the Patriots, owner Robert Kraft pulled the plug on Carroll, stating “firing Carroll was one of the toughest decisions I had to make since buying the team.”

After being let go by the Patriots, Pete Carroll went on and made a legendary career at USC. According to some experts, he was considered a better fit for college football than the NFL. Carroll was known and still is for his energy, youthful enthusiasm, and excellent mind-set in terms of recruiting.

In 2008 ESPN named Carroll’s hiring the #1 moment in PAC-10’s history of the BCS era. He ended his career at USC with two national championships appearances, winning one, and seven consecutive BCS bowl games, winning six. He had four Top five recruiting classes, 53 players selected in the NFL draft with 14 of them coming out of the first round. In 2007, his effect on the college football landscape was named one of the biggest developments over the past decade in ESPN the Magazine. In 2014, Carroll was announced as a member of the 2015 USC athletic hall of fame class. He was inducted May 18th, 2015.

In 2010, the first year as the Seahawks head coach, he brought the team to a 7-9 record. Despite the losing record, he still managed to lead them to the playoffs due to the lack of competition in the NFC West. Some called it the “NFC Weak.” However, the Seahawks beat the defending world champs, New Orleans Saints in the first round of the playoffs becoming one of the biggest upsets and best play from a running back in the history of the NFL.

Yet, from all that compost pile, one of the lowest periods in club history, Pete Carroll bloomed a team in his first four years and took the Seahawks who were at the edge of the cliff as an organization, to a Super Bowl appearance for the first time since 2005 against the Denver Broncos and won the biggest stage in sports for the franchise’s first Lombardi trophy. A feat unfathomable from the despair of early January 2010.

Since then, Pete Carroll has turned an organization that was declining, and fast to one of the most dominating teams ever assembled in the history of the NFL. Cutting fan favorites to formulating players that no team would take a chance on into all-pros. Carroll took a lot of risks on players and was graded poorly for it. “Experts” didn’t know what he was doing, and he was ok with that. His unique ability to recruit players truly separates him from other coaches.

Since Carroll arrived in 2010, including the playoffs, the Seahawks have a .591 winning percentage, four division titles, has reached the divisional round in all playoff appearances, two NFC championships, two Super Bowl appearances, winning one all in that span. After all that has been accomplished, it seems that recognition is still nonexistent, no? Carroll has yet to win the coach of the year award and probably never will due to the talent he consistently brings home. I mean, Ron Rivera and Bruce Arians was awarded the coach of the year, TWICE. Both coaches have missed the playoffs 5 times combined to Carroll’s 1 in his seven year tenure with the Seahawks. If there’s one coach in the NFL that gets overlooked, it’s Carroll.

All the success that the Seahawks have had in the past seven years, has a lot to do with a man who “doesn’t have what it takes to coach at the professional level.” Pete Carroll took his second chance in the NFL and has built a dynasty. He has coached the Seahawks with a chip on his shoulder, just as his current players do when they play. It’s safe to say that Pete Carroll will go down as the best coach in the history of Seattle’s organization and one of the best in the league.

Pete Carroll is 66 years young and going into the 2017 season, he might have his best roster as a head coach at any level. The disparaging of Pete Carroll will keep writing his legacy until it probably kills him.

But if the single most popular word used to describe Pete Carroll and these Seahawks in 2017 is “atypical,” well, that doesn’t begin to tell the story of preposterousness of the path from the compost pile.