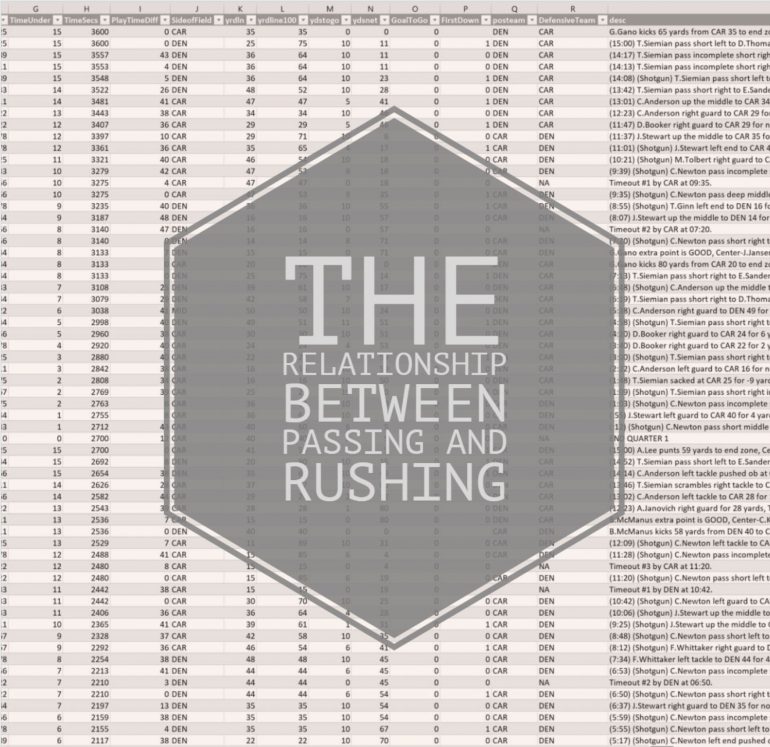 The Relationship Between Passing and Rushing

People have varying opinions on ESPN’s Total QB Rating stat, but  20 straight wins (plus 1 tie) for the team with the higher QBR is hard to ignore. So I decided to dig in and take a look at what might cause it. The two questions that  I wanted to answer were:

To answer the first question, I looked at every NFL game in 2016 where both teams had a QB with enough attempts to qualify for QBR. There were 172 such games, and the team with the higher QBR won 140 of those games. That’s 81% of the time the team with the higher QBR won! That’s a lot, and while it doesn’t quite match the streak that the Seahawks have been on, it shows that QBR does a great job of predicting the winning team.

To answer this question, I used nflscrapR’s 2016 play by play data and the same QBR data from before. The play by play data allowed me to aggregate the average yards per carry, average EPA, average WPA, first down’s gained per rush, total first downs gained via rushing, and total rushes for each game. Most of these have slightly positive correlations with QBR, but they are far too small to show a relationship between the two stats. The only relationship that is of interest is the one between the total number of rushes and QBR. Number of runs in a game explains about 8% of the variance in QBR, which is not particularly large but it’s far more than any of the other relationships I looked at.

This does line up a little bit with the conventional wisdom of staying balanced. Simply rushing more often may help the passing game by forcing defenses to continue to honor and be prepared for a team to run against them. But there is another possible explanation, that high QBR leads to a higher number of rushes. If a team is passing well they are likely putting up points and may have a lead at the end of the game. Teams with a lead in the 4th quarter tend to run more often, to keep the clock running and ice away the game. After removing 4th quarter runs, the total number of rushes only explains 2% of the variance in QBR. That’s very small, and means there’s effectively no relationship between how often a team runs and their QBR.

So what does this mean?  First, QB play is extremely important to winning games. Second, there is very little to show that a team’s success in the running game influences QB play. And if running doesn’t help you pass, then running does very little to help you win. The conventional wisdom that teams should establish the running game or maintain some kind run/pass balance does not appear to be supported by evidence.  Which isn’t to say that teams shouldn’t run. Rushing is helpful in goal line situations and in running out the clock at the end of the game. But in 2016, teams averaged almost 3 more yards per pass attempt (7.1) than per rush attempt (4.3). Meaning that, outside of obvious running situations, teams should likely be looking to pass even more.