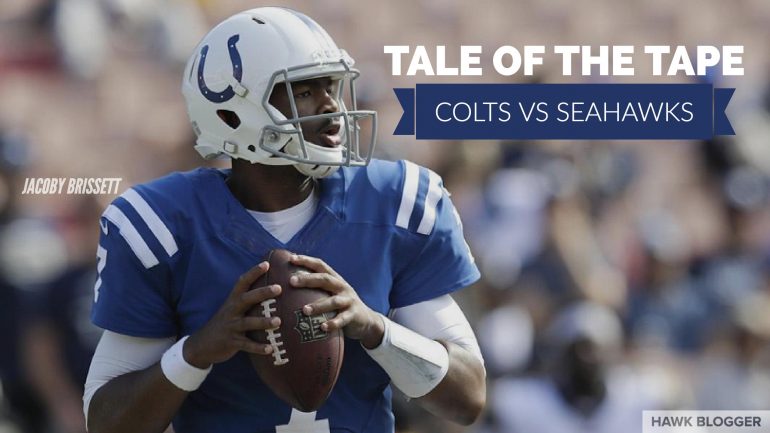 Tale of the Tape — Colts Have Hidden Strengths

It is no surprise that the Colts enter this week with just one win, especially given the absence of their starting quarterback. That Seattle has an equal record is a disappointment given their lofty preseason expectations. The narrative heading into this Sunday night primetime contest will be that the Seahawks will get rolling against a vastly inferior opponent at home. That may prove to be true, but the Colts may not be as bad as everyone thinks, and the Seahawks have yet to prove they are significantly better than opponent.

The Colts defense has been pretty darn bad. They gave up 46 points to the Rams and 28 points to the Browns. They are getting back a key starter in cornerback Vontae Davis that should help, and have been better in defending the run than most fans would know.

Seattle’s offense has made every defense they have faced look formidable, but caught fire toward the end of the Titans game, which has inspired some renewed hope that they can begin to find their footing. 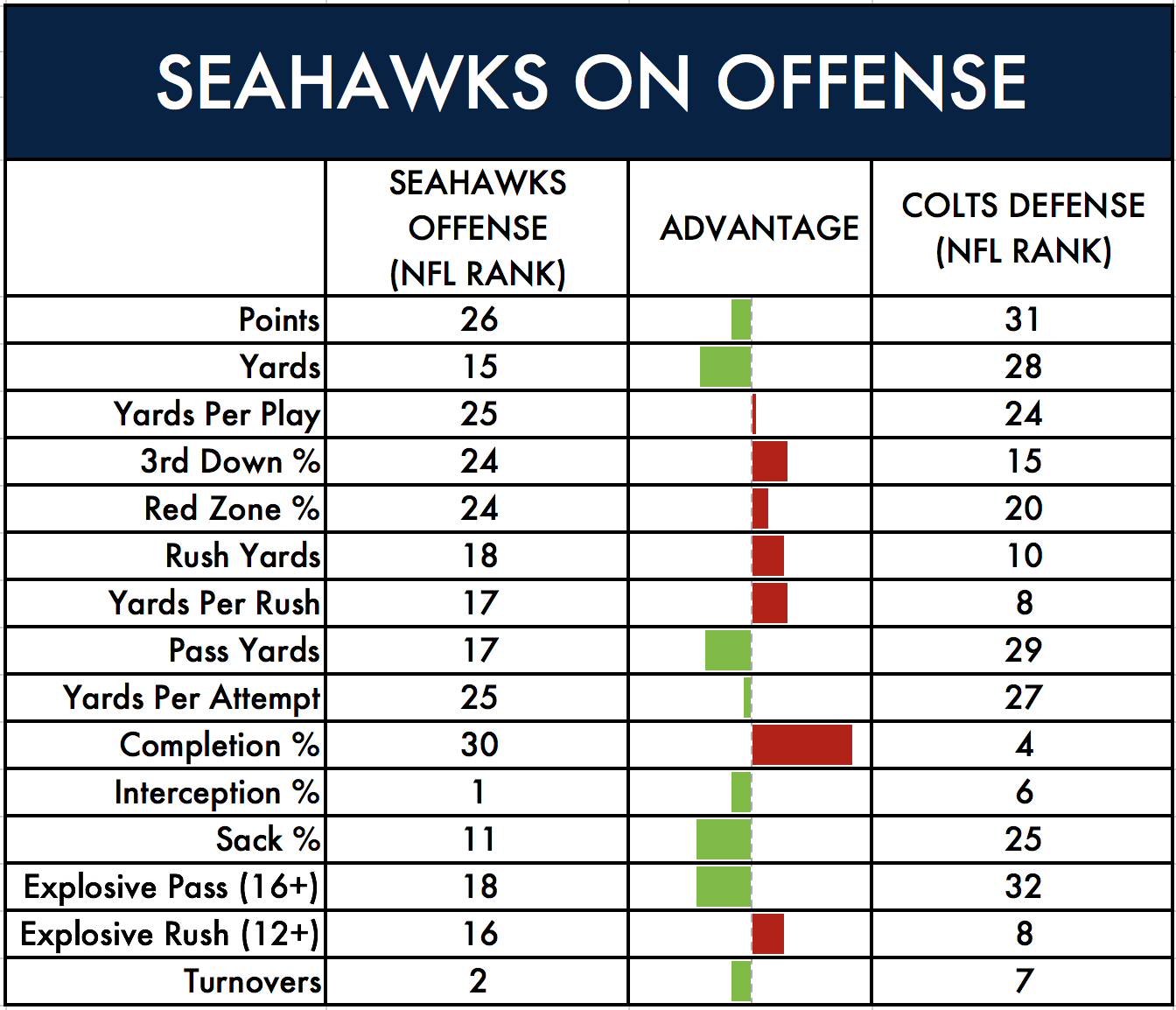 Indy has been a top ten run defense through three games. They do not have any stars on defense, but guys like linebacker Jabaal Sheard and defensive tackle Jonathan Hankins have been particularly stout against the run. With Doug Baldwin less than 100% for this game due to a groin injury, the Seahawks will be less able to rely on their top target. Paul Richardson has made some nice plays, but he and Tyler Lockett will need to step up in order to give Russell Wilson the options he needs in the passing game. This could also be a game where rookie Amara Darboh is asked to play a larger role.

There is a desire for the Seahawks to establish their run game, but this would appear to be one of the tougher teams to do that against. Is that Colts run defense truly stout, or did they just face weak run offenses? The Cardinals were without David Johnson and have an offensive line that is struggling almost as much as the Seahawks. The Browns are 24th in the NFL in rushing yards, the Rams are 26th in yards per carry and the Cardinals are 31st.

Seattle may have a better chance to run that the statistics indicate. The offensive line has also made noticeable progress each week. While nowhere near good enough, the improvement is hard to deny. The Seahawks have seen their first downs, yards, and points increase each week while their opponent sack rate has decreased.

Rees Odhiambo remains a major issue at left tackle, especially in run blocking, and it may open the door for the team to explore other options like Matt Tobin, who got three snaps against the Titans and gave up a quarterback hit. There are no easy solutions here.

Jimmy Graham got going last week, and may be the primary beneficiary of Baldwin’s diminished capacity. He is a mismatch every week. The question is whether the ball comes his way.

C.J. Prosise is another one to watch, as he had a big play in the passing game in Tennessee, and might get more snaps if the team decides to feature their up-tempo offense more in an attempt to start faster and with more urgency on offense.

The Colts have the worst pass rush of any team Seattle has faced so far. Wilson should be in decent position to have another strong statistical performance.

Andrew Luck is out. Jacoby Brissett is in. He provides different challenges than Luck. He is a big body who can absorb hits while on the run, and throws a decent deep ball. T.Y. Hilton gave the Seahawks fits back in 2013, and continues to be their primary target. 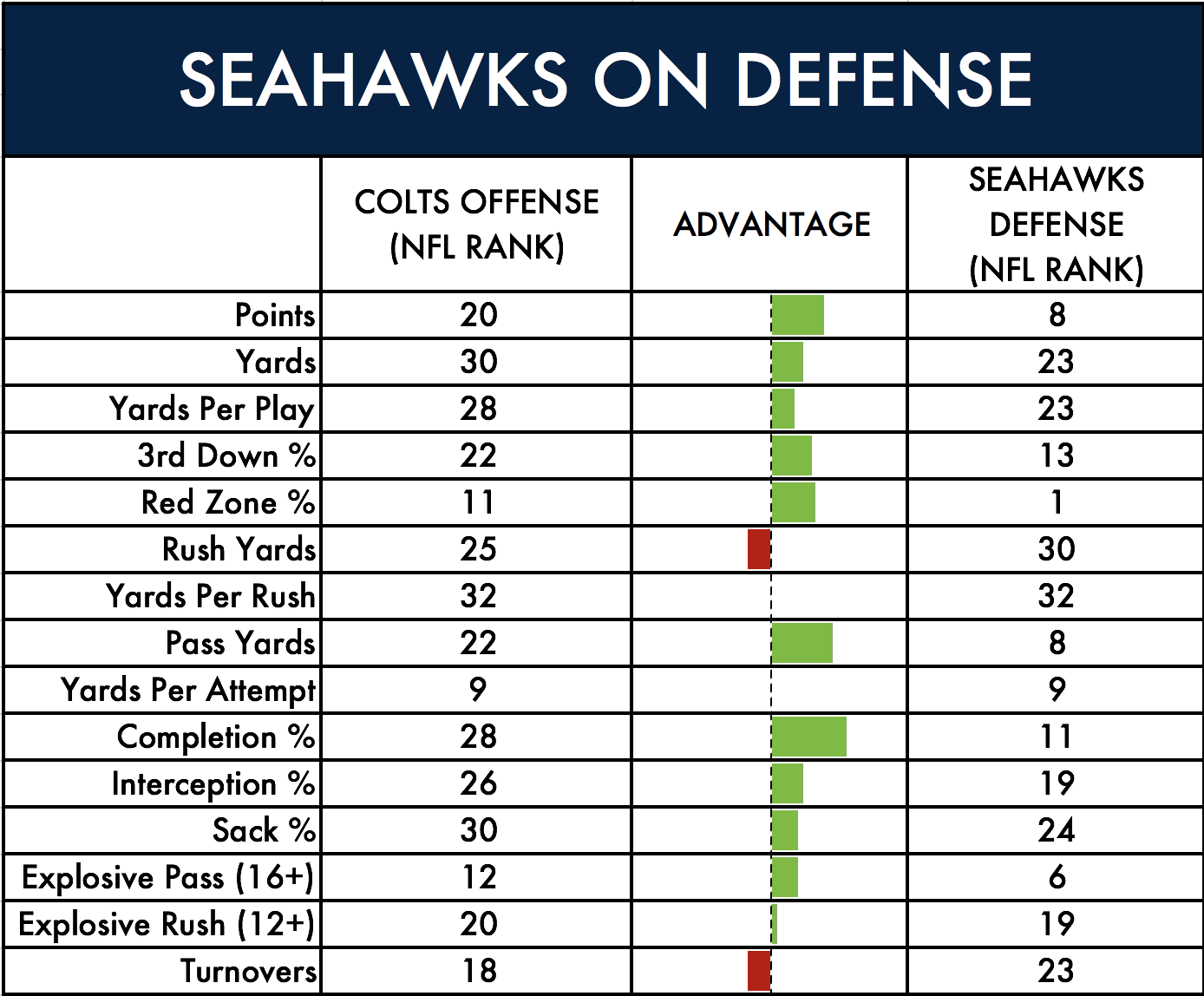 There are not a lot. Teams have been able to expose the Seahawks run defense through the last two games, but the Colts are the worst running team in the NFL by yards per carry. They might look at the Seahawks mirror ranking on defense and hope this is the game where they can get that part of their offense going.

The Colts have done fairly well in creating explosive plays through the air. Hilton is a great weapon there. Kamar Aiken was a receiver who gave Seattle problems a few years ago when he played for the Ravens, but he has not been the same player of late.

Brissett does not run a ton, but he is tough to bring down when he does. Seattle was burned for a few first downs by running quarterbacks in week one and week three. They will need to keep an eye on Brissett this week.

Seattle now boasts the best red zone defense in the NFL. That is a great sign. What emerged as a problem against the Titans was explosive play touchdowns that did not require an offense to even enter the red zone before scoring. The fundamental principle of the Seahawks defense is to limit big plays. They have not been doing that on the ground.

The good news is very few big pass plays have succeeded thus far, and one of the few was a screen pass. The Colts like to go deep, and the Seahawks excel at taking that play away. That bodes well for Seattle.

Indy has struggled in pass protection and the Seahawks have struggled in creating pass pressure. This could be the game where the Seahawks find that fearsome pass rush everyone predicted they would have with the addition of Sheldon Richardson.

Seattle is hurting on special teams. If they are without Neiko Thorpe and D.J. Alexander again, this could become an issue. Dewey McDonald is out with an ACL injury, so their top three special team players are in question. The Colts are not a dynamic punt return team, which mitigates the risk to some extent. 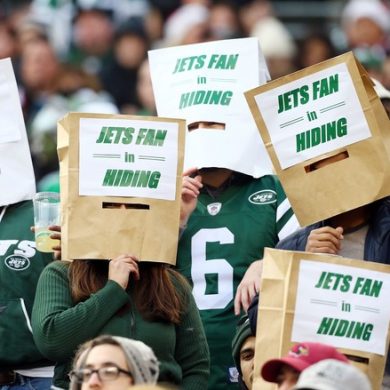