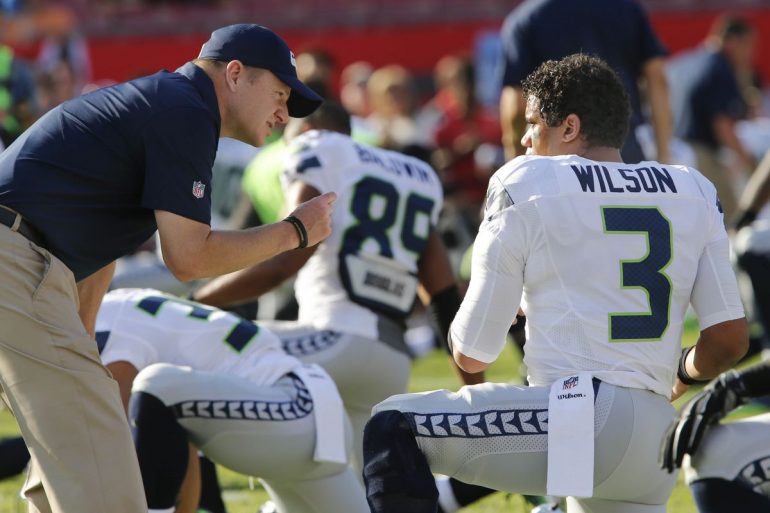 Reconstructing An Offense In Season

So here we are at the bye week of 2017. The offense seems to not have it’s identity. The running game has all but vanished, leaving Russell Wilson doing all the heavy lifting. Offensive coordinator Darrell Bevell is left to find out what his team does well in the passing game, while trying to squeeze some consistency from the corpse of a running game.  There are some of you from Seahawks twitter that have already asked me “What can really be done in such a short space of time?” It feels complex, but let me illustrate some examples of drastic alterations to offense in just Seattle’s own history to help you see it’s been done.

Curt Warner wasn’t just a breakout star in 1983, he was by far an away the first player Seattle had that titled the field all by himself. Warner’s 1,774 yards and 14 scores were the foundation of a new era in offensive football. This all changed however in the 1984 season when Warner suffered a knee injury in the first game vs. the Browns. It was a big loss as Seattle didn’t have another back able to make the plays Warner could. This meant the offense had to come up with concepts that could help duplicate some run success while depending on the quarterback’s arm. Luckily with a star like Steve Largent and a flashy speed guy in Daryl Turner, Dave Krieg’s 32 touchdowns became a franchise mark that stood until 2015.

The team relied a lot on split backs and shotgun empty formations instead of I-formations with Krieg under center. They threw a lot out of the backfield to the likes of Dan Doornink and David Hughes. By October, they’d found a grove doing it. Here Are some great plays from that season:  These and this.

A fading franchise’s final gasp in 2007

Most of you know this story. Seattle finds itself unable to rely on what has defined them since 2004. Their star running back is fading away. On the flip side Seattle had added lots of talent for the passing game with Dieon Branch and Nate Burleson to go with the scrappy Bobby Engram. Up until a game against the Saints, Seattle remained committed to featuring Shaun Alexander. However, after a few four-wide receiver sets produced the Seahawks most explosive plays all year, Mike Holmgren and offensive coordinator Gil Haskell went to work retooling their concepts and packages. Gone was the reliance on I-formation and in were spread formations and Shotgun as a feature. Holmgren was never a fan of Shotgun as he felt it screwed up the rhythm and natural timing of pass plays. This was the first year Matt would play in shotgun under Holmgren.

Holmgren still ran the ball using the combination of Alexander, Mo Morris and the explosive Leonard Weaver. The 2007 ‘Hawks used draws, delays and screens to produce enough to move defenses around. This helped lead to Matt Hasselbeck’s best season as a pro and Seattle’s most explosive offense since 2004. Here’s one of my favorite examples of the revamped offense.

While not necessarily drastic, the 2012 season saw the Seahawks win a game against the Bears in overtime. On the last two drives, Russell Wilson engineered plays by scrambling some and throwing some. The players would get behind Russell fully after this performance, but Pete seized on the key element. He recalled going to Darrell Bevell taking a look at what the Redskins were doing with RGIII at the time. This lead to them installing some read option concepts and featuring scrambles and play actions to feature Russell Wilson’s scrambling ability as an X-factor. They ended up shredding the likes of Buffalo, Arizona and San Fransisco. Not all of it was do to the read option of course. The fact that they added a new formation and concepts, then had it rolling just before the playoffs in 2012 is impressive. Here’s a reel from the Buffalo game. Sorry for the music.

A Crumbling Foundation On Offense

An offense needs three things to be successful outside a philosophy;

1. A formation it likes.

Seattle under Bevell has run two tight-ends for the bulk of it’s plays. Around 40% during Bevell’s tenure. It’s the most flexible run to pass formation for Pete Carroll’s stated philosophy of hard nosed run to beat you up, pass to kill you. It worked even as the line decayed in 2015 but in 2017 so far, it has been the worst most unsuccessful formation by far.

2. An Engine for design.

When Darrell Bevell went to the drawing board from 2011 -2015 the first player he likely set down in the scheme was Marshawn Lynch. Why wouldn’t you? When he dictated to the defense there was no other way to live. Since Lynch’s decline and then departure, Bevell seems to have struggled to find a new guy to focus on. Perhaps hoping Jimmy Graham would help some, However, Doug Baldwin is probably your guy here.

3. An X-factor. These are always odd players. They’re never quite good enough to be engines but they are the guys that seem to shake things loose when the game is tight. If you’re having trouble getting things moving. They’re like a laxative if you will. Percy Harvin was an X-factor. Russell Wilson’s scrambling has been that X-factor. What about Tyler Lockett though? Those reverses look useful. This offense needs to find something outside Russell’s running to pressure the defense when things are tight.

If the offense is going to find consistency it must identify these things.