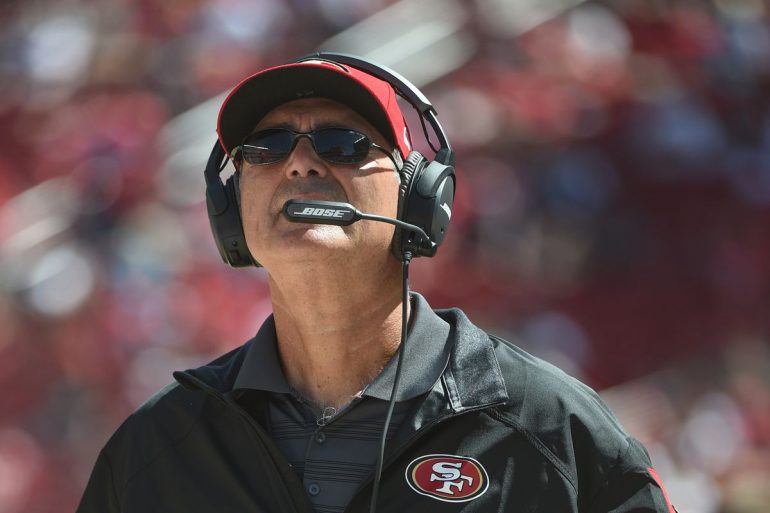 On Tuesday, the Tom Cable era came to a long overdue end. Yesterday, Seahawks fans got a glimpse of the start of the next era.

The reports have since been confirmed by the team, officially making Mike Solari the offensive line coach of the Seahawks for the second time. Solari came to Seattle 10 years ago with an established resume, coaching offensive line in college starting in 1980 and then breaking into the NFL in 1986 with the Phoenix Cardinals in the same role. Solari would eventually catch on as a tight ends coach with San Francisco from 1992 to 1996. During that time Solari would pick up a Super Bowl ring and, more importantly to us, coach alongside Pete Carroll*.

Solari would leave San Francisco in 1997 to join Marty Schottenheimer in Kansas City. This is where Solari would make a name for himself. The Chiefs fielded dominant offenses during Solari’s 10 years with the team, frequently featuring an extremely successful rushing attack.

If you tally those numbers up, with Solari coaching the offensive line the Chiefs put together:

Most impressively, the Chiefs were number 1 in rushing DVOA for 4 straight years. To give that some context, from 2012 to 2015 Seattle ranked 1st, 7th, 1st, and 3rd in rushing DVOA. It was an incredible run of dominance that Solari certainly deserves credit for. The question is, how much?

There are a few things to note about the Chiefs during Solari’s time with the team.  First is the talent along the offensive line, a unit that included Willie Roaf, Will Shields, and Brian Waters. Roaf, the 8th overall pick of the 1993 draft, was an 11 time Pro Bowler and 3 time All Pro. 8 of those Pro Bowls and 1 All Pro were with Solari, but Roaf had gone to 3 Pro Bowls and been named an All Pro twice before Solari had joined the team. Similarly, Shields would go to 8 Pro Bowls and be named All Pro twice, but had gone to back to back Pro Bowls before Solari. Considering their established success, it’s hard to credit Solari too much for their success.

Where Solari likely does deserve credit is with Brian Waters. Waters was an undrafted free agent in 1999 who didn’t make it out of training camp with the Dallas Cowboys. Kansas City signed him the next season and, under Solari’s tutelage, Waters would go on to 6 Pro Bowls and 2 All Pro awards.

Another thing to note is the additions the team made in 2001. Dick Vermeil joined the team that year, having previously won a Super Bowl with the Greatest Show On Turf in St Louis. Vermeil brought Trent Green with him, who had originally been the QB for those Rams teams before an injury made way for Kurt Warner. 2001 was also Priest Holmes’ first year in Kansas City, having left Baltimore averaging 4.7 yards per carry and with a 1,000 yard season under his belt. It was with this influx of talent that Kansas City jumped from a good offense to a great offense.

Starting in 2005, the core of that great Chiefs offense began to turn over. Priest Holmes broke down in 2005 and gave way to Larry Johnson, who would rush for over 1,700 yards in both 2005 and 2006. Willie Roaf retired in 2005, followed by Dick Vermeil retiring in 2006. Vermeil was replaced by Herm Edwards, who promoted Solari to offensive coordinator after Al Saunders left to take the offensive coordinator job in Washington. And then in week 1 of the 2006 seasons, Trent Green suffered a concussion forcing Damon Huard into the starting QB role for the next 9 games. Despite the turnover, Kansas City was a borderline top 10 offense with Solari calling plays.

Kansas City suffered further loses in 2007, losing Will Shields to retirement and both Larry Johnson and Damon Huard to injury. The Chiefs were unable to replace either Johnson or Huard, and went 0-6 with Brodie Croyle at QB. The Chiefs would win just 4 games and, with one of the worst offenses in the league, Solari was fired.

Solari would be hired by Mike Holmgren in Seattle but, unfortunately for him, Seattle in 2008 was a mirror of Kansas City in 2007. 2008 was the first post-Shaun Alexander season, with the team turning over the starting running back job to Julius Jones. It was also Walter Jones’ final season before retirement, and Jones would miss the final four games with an injury. Matt Hasselbeck succumbed to injury twice in 2008, missing 5 games early in the season and then missing the final four games after suffering a second injury.

Things managed to only get worse for Solari in 2009, as he was retained in the transition from Mike Holmgren to Jim Mora Jr. Seahawks fans are well aware of the dysfunction under Mora, so I won’t belabor the point. Mora would only last the one year, being replaced by Pete Carroll in 2010. Pete reportedly wanted to retain Solari as offensive line coach, but he chose to leave for the same position with San Francisco. And after his first two seasons in Seattle, who can blame him?

Solari’s time in San Francisco was similar to his time in Kansas City. Working under a successful offensive coach, Solari was a part of building an offense that was highly successful for a few years (if not nearly as successful as the 01-04 Chiefs). Solari would inherit Frank Gore, Joe Staley, and Alex Smith (largely considered a bust at this point in his career). In his first year with the team, the Niners would draft Anthony Davis and Mike Iupati. While the offense would make a leap in the first two years under the new coaching staff, it wasn’t until the addition of Colin Kaepernick that they became one of the best offenses in the league. Along with Kaepernick came the rise of the read option, which the team incorporated with great success.

After Harbaugh’s falling out with the Niners front office and ownership, Solari spent a year in Green Bay as an assistant offensive line coach. This isn’t especially noteworthy, but there are worse places to spend a year in exile than hanging out with Aaron Rodgers.

The next stop for Mike Solari was New York, resuming his offensive line coach role. Solari would again work under an offensive head coach, and he inherited Rashad Jennings at running back and both Justin Pugh (1st round pick in 2013) and Weston Richburg (2nd round pick in 2014) and Ereck Flowers (9th overall pick in 2015) on the offensive line. Despite the draft capital spent along the line, none of the players mentioned would see considerable development and the offense would rank near the bottom of the league in both seasons with Solari. While discouraging, it’s worth noting that the Giants hadn’t ranked in the top 20 in rushing DVOA since 2012 and had only ranked in the top half of passing DVOA once during that same time. It’s also hard to blame Solari for the dysfunction around Ben McAdoo that ultimately tanked the Giants 2017 season.

Solari’s history is long and there is a huge amount of variation in the effectiveness of the offenses he’s been a part of. When he was put into bad situations, the teams were bad, and when he was put into good situations, the team was good. It’d hard to know exactly how much to credit or blame him for any of those teams, but at the very least we can say that Solari has been a part of some truly great teams. You can also say he hasn’t been able to overcome adversity, but as a position coach it’s probably not reasonable to expect that he would.

Solari’s resume well covered, lets talk a little about scheme. Solari uses a hybrid scheme and is capable of coaching lots of different looks. This was most on display in San Francisco with Jim Harbaugh, who used a wide variety of run blocking assignments to keep teams off kilter. That stemmed more from Harbaugh than Solari, though. It’s likely Seattle will continue to be primarily a zone blocking team, but with more wrinkles than we saw under Cable.

Against Seattle, the Giants did exactly that. New York paired inside zone looks with various counters that used more power blocking techniques, along with quite a bit of motion.

Here is a straight inside zone run that probably looks pretty familiar to what Seattle has ran.

And here is inside zone again out of a different personnel package.

But New York also used misdirection and man blocking to mix it up.

And would pulled the guard on a counter a few times.

None of this is groundbreaking stuff, but Solari brings a coaching background that should allow Seattle to build in some additional wrinkles to help keep defenses off balance.

*Pete was defensive coordinator from 1994 to 1996 where he coached another returning Seahawks coach, Ken Norton Jr. Coaching staffs are a flat circle.