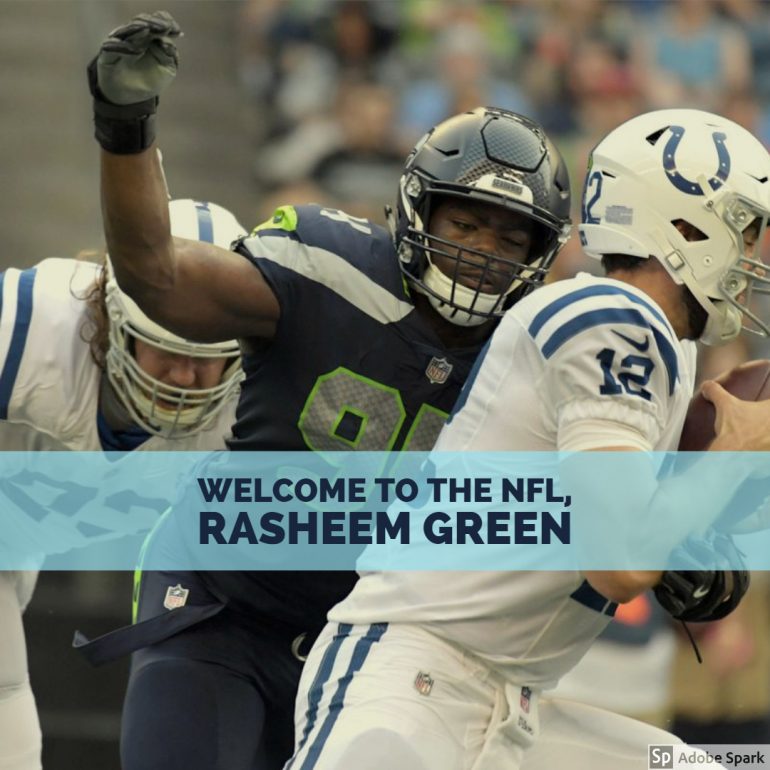 Welcome to the NFL, Rasheem Green

“I wanted him to go back to school because he probably would have been a top-10 pick next year. He’s not strong enough to handle NFL guys yet so this year may be a redshirt year for him. He’s got some serious juice though. He’s going to be a dude when it all comes together.” — AFC team regional scout

That quote is a pretty perfect encapsulation of draft prospect Rasheem Green. Green’s upside was undeniable: he was one of the youngest players in the draft, his combine numbers qualified him as a force player, and he racked up 10 sacks in his last season at USC. But despite the production, Green’s tape was frequently underwhelming. Capable of flashes, Green struggled to maintain any kind of dominance over a stretch of play.

Seattle was able to strike a good balance between risk and reward with Green, drafting him in the third round. But with the departures of Cliff Avril and Michael Bennett followed by injuries to both Frank Clark and Dion Jordan, the Seahawks have had to abandon any plans to redshirt Green. The sudden lack of depth at an already thin position forced Green into playing nearly all of the snaps in his preseason game.

It was a huge opportunity that Green took full advantage of. On just their second drive of the game, Green sacked Andrew Luck.

What’s most encouraging about this sack was Green’s hand use. Green keeps himself almost completely clean with a nice little rip move before dipping around the tackle. Technique will determine how much of his potential turns into reality, and this is a good early indicator of what Green can grow into.

Green’s athleticism was on display as well. On this play, Green’s club is not especially powerful but it does get him upfield of the right tackle. Once he has this position, Green shows the ability to bend and get into the pocket.

Not only was Green immediately productive in his first preseason game, he showed off some versatility as well. The two clips above were a few plays apart, and you can see Green lining up at both right and left end. Seattle moved him around all game long, even sliding him inside on a hand full of plays.

Green’s second sack of the game came while lined up as a 3 tech in Seattle’s nickel package. He again uses a club and rip move, the club again more finesse than power, and is able to quickly slide off the guard. The tackle is subpar, but Green’s completely disrupted the play and bought time for Jacob Martin to help him finish off the sack.

Green still has a lot of work to do rushing from the inside. Most of his other snaps there were of little note. But that he’s already spending time there and is capable of flashing is encouraging.

Green’s run defense was a little more of a mixed bag. He still made plays against the run, here bullying a tight end for a stuff.

And here playing down the line for another stuff.

But the concerns about Green’s strength did show up. One on one against the tackle on this play, Green’s bull rush is completely ineffective.

Green’s worst play of the game came against the run. Needing to set the edge against this outside run, Green is blown back by the tight end outside of him and then washed out down the line by the tackle. It’s a tough play, but Green shows off both his inexperience and his suspect anchor.

We’ll never know what Seattle had planned for Green when they drafted him. Ever the optimists, they likely saw Green contributing sooner than anonymous scouts and draft twitter thought. But as optimistic as they are, it’s hard to think they would’ve imagined Green’s first NFL action to go any better than it did against Indy. There’s still a long road to go but if Green can follow in the footsteps of Frank Clark and Bruce Irvin’s rookie season, it would be a huge boon for the Seahawks present and future.