Can Pete Carroll fix what ails the Seahawks? 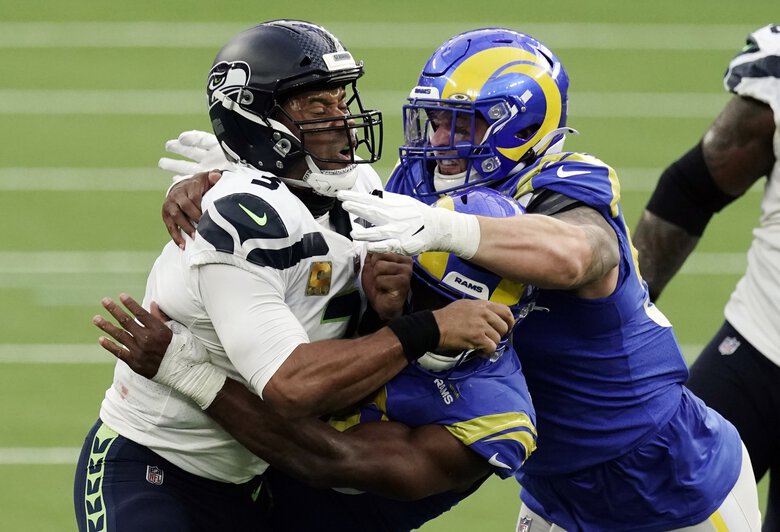 The Seahawks have struggled offensively since the second half of Week 7.

There were a number of bothersome issues in the Seahawks’ disappointing loss to the New York Giants.

The Seahawks scored just one touchdown against a sub-.500 team. Russell Wilson looked jittery for fifth week in a row. The Seahawks had a very questionable game plan and Wilson and the coaches had no answer to what the Giants were doing defensively. And as Brian pointed out in his Monday column, the third quarter run defense was an inexcusable as it gets, given the Giants’ offensive limitations.

As bad as all of those were, a bigger problem has loomed over the last month and a half – and it is quite a concerning one. The Seahawks have lost their identity. From a coaching standpoint, they are getting out schemed too often & they seem caught in the middle of trying to be a pass-heavy offense while trying to simultaneously establishing the run or create balance. Some see this as a flaw of the Let Russ Cook movement. I do not. I see this as a coaching issue — and a lack of direction.

Pete Carroll’s game management is a great indicator of this. He continually talks about how he wants to be aggressive in his approach, and how the team is trying to pass the ball more on early downs. And while it is abundantly clear to any neutral observer that the Seahawks have to win this season with offense, he continually punts the ball inside the opponent’s territory on fourth downs. They are not playing to their strengths. At least when they were run heavy, they were consistent.

This is why my faith in Carroll as a good fit for THIS roster is fading. He and his staff can’t seem to evaluate his own team. Nothing was clearer of this than the Seahawks’ decision to not run the ball on 4th and inches with Chris Carson. They had a failed play action pass that the Giants saw coming from a mile away.

The first six weeks of the season were extremely positive from that standpoint. OC Brian Schottenheimer and Carroll made a significant philosophical shift in their approach, passing more than any other team in the league out of neutral situations, and running an offense that fits the strengths of their franchise player. Wilson was having a career year, looked like a lock for MVP, and DK Metcalf and Tyler Lockett had emerged as the best receiver combo in the NFL.

However, since the second half of the overtime loss to Arizona in Week 7, the Seahawks started to show cracks offensively, as the league adjusted to the new offense. Arizona, Buffalo, the Giants, and the Rams all threw different looks, blitzes, and coverages to confuse Wilson, and since then, he has been nowhere near as productive. He has just four total touchdown passes in his last four games, and the Giants game plan provided more evidence that Carroll & Schottenheimer has not been able to come up with a counter punch and find a solution once teams take away the deep ball.

All of this brings me back to my initial point. What is the identity of this team Why has it become so unclear? And why aren’t all of the football decisions based around that direction?

This is a definite change from the early years of Carroll and Schneider. When the Seahawks initially built up their roster in 2010-2014, it was obvious was a clear plan and all of their personnel decisions were built on this principle. They both wanted to look like Baltimore and Pittsburgh from the previous decade – big, brash, physical,, and fast. All of their early draft picks, signings were built around this principle. Richard Sherman, Brandon Browner, and Kam Chancellor were uniquely big at defensive back, Earl Thomas was perfect for the Ed Reed/Troy Polamalu role. They traded for the most bad ass running back they could find. They wanted linemen that were more ass kickers than technically proficient. It all fit together. They obviously couldn’t maintain a talent base like that, but somewhere this was lost. Maybe it was the Jimmy Graham or the idea of building around grit, but from a football standpoint, there is not a consistent approach in this regard.

If you wanted to be a team truly built around Wilson, then why are they punting so much to play for field position? If you want to play for field position and defens, then why ignore so many pass rushers in free agency? The Chiefs are the best example of this. It is clear how they are trying to win and its personnel decisions reflect that. They continue to add pass catching weapons on a yearly basis. They brought in Sammy Watkins as a free agent, drafted Mecole Hardman last year, and then even brought in a pass-catching running back in the first round in 2020, despite upsetting all of the analytic nerds. It was designed to fit Reid/Mahomes. The same can be said for the team building of the Buffalo Bills under Sean McDermott and Brandon Beane over the last three years.

I just keep coming back to this. If they wanted to alter their offensive identity, and make this the primary approach of the football team, then why not build a team that’s built to do that? They had multiple opportunities to add to their arsenal of weapons, given the dip in productivity once Lockett got injured in the second half of last season. They had multiple chances to pluck a top WR in arguably the best WR class in year to pair with DK, and Tyler, and instead, they picked an off-ball LB and and traded up for an injured pass rusher. While Jordyn Brooks is a good prospect, and Darrell Taylor has a ton of upside, there just didn’t seem to be any vision in how their building the team. They could have definitely used another good receiver, or a better pass catching running back to fit this style.

The Seahawks are no longer dictating the terms. They are reacting. They went base heavy last year to adjust for the success of the Rams and 49ers. This year, you can argue their approach was the same. Again, this isn’t designed to nitpick their draft or their offseason, but it all fits together. Even watching an undermanned team like the Giants, they looked very clear in this area. It’s why Joe Judge has done such a good job this season.

For the first six weeks of the season, I thought Carroll had warranted coach of the year consideration. He had a clear plan from his coaching staff, he was more aggressive on game days with fourth down calls (the DK Metcalf play in the Atlanta game is a perfect example of this), and the team was succeeding as a result – even with a historically bad defense. He played to his teams strengths. Now Carroll doesn’t seem to know what his team’s strengths are. On top of that, his old game day tendencies are returning. He was as lost as I’ve ever seen him in Sunday’s post-game presser, and looked like a boxer that took too many hits in a fight.

This is Year 3 since Carroll and Schneider reset the organization following the 2017 season. By now, they were ready to compete for a Super Bowl, and while this seemed to be the case early in the season, which was such an encouraging sign, they have reverted back and look exactly like what ailed them in 2017. And this time, they don’t have injuries to blame. That team started 8-4 and fell apart in the last month of the season. The Seahawks in 2020 are 8-4 and just had their worst regular season loss in years.

As Michael Lombardi constantly says on his GM Shuffle podcast, the job of a head coach is to be a chief fixer upper. He needs to be the one to determine a problem and a legitimate solution with Wilson and the offense. Why are other teams coming up with creative schemes to stop Wilson, but the Seahawks coaches aren’t coming up with another creative to dictate with their personnel?  That will help them as much as anything if they want to salvage what looks like another playoff early exit. If they continue to be lost between a bunch of different ideas, they will absolutely fail in the playoffs. And maybe earlier than some like.

This is on Carroll and his staff to get right.