Search
Home
OffenseQuarterbacks
Seattle very nearly lost a game this past week even though their defense played a historically brilliant game against one the NFL’s best offenses. Some would argue the team’s lone loss in the first week of the season came as a result of inept offense. The Seahawks are dead last in the NFL in passing yards, pass attempts, and yards per attempt. Yet, the team is 2-1 with wins over two powerful teams. Pete Carroll insists the team can continue to win with a formula of great defense, special teams, and low turnovers, even if the passing game production does not improve. It is a difficult proposition to believe. Green Bay only scored twelve points, and the offense had trouble eclipsing that number. In times of doubt, looking for historical comparisons can be illuminating.

These are only Wilson’s first three games, though, so it is reasonable to expect he will get better as he gets more experience. Smith and Roethlisberger are two case studies worth digging in deeper on because they led wildly successful teams. Tebow’s Broncos were 8-8, and the Jets were only 9-7 with Sanchez. Why aspire to mediocrity? Let’s see what kind of quarterback play was required to win 13+ games.

Take a look at some passing totals for Wilson, Roethlisberger, and Smith through the first three games they played: 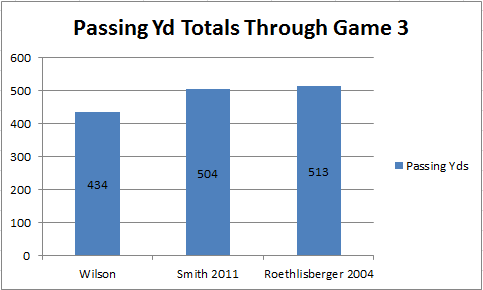 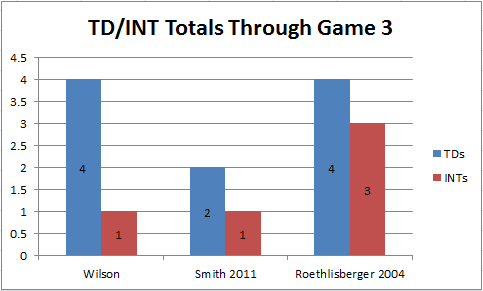 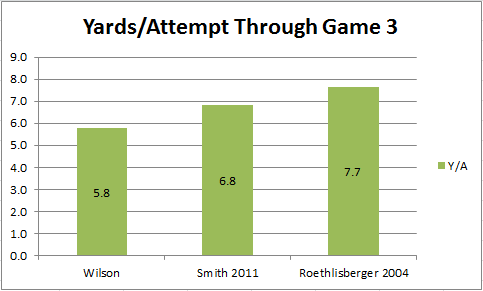 Wilson is right there with the other fellas in terms of total passing yards. The 70 yards he trails them works out to around 23 yards per game. That is not a massive difference. Where he really shines is the TD/INT ratio. Smith had only thrown two touchdowns by this point last season. Wilson has double that number. Both Roethlisberger and Smith threw for 17 touchdowns in their seasons. Wilson is on pace to throw for 21 touchdowns. Only six quarterbacks in history, and three since 1960, have thrown for 21 or more touchdowns in their rookie season. Those players were Peyton Manning, Cam Newton and Jim Kelly. Wilson is on pace to throw only five interceptions. None of those three quarterbacks threw fewer than 17 interceptions as rookies. Smith managed to throw just five last year, and Roethlisberger threw 11.
Wilson’s yards per attempt is concerning. That’s Blaine Gabbert 2011 and Jimmy Clausen territory. There is not a good way to search for how many teams have made the playoffs with a YPA that low, but a brief perusal of a list of QBs that have posted numbers in that range makes it clear very few make the playoffs. Smith was middle-of-the-pack last year, and Roethlisberger was near the top of the league. Those two led successful teams with low yardage, and even touchdown passes, but they made their attempts count. Wilson must improve dramatically here.
The trends over the course of a season can be useful to review as well. Here is how each player did through three games: 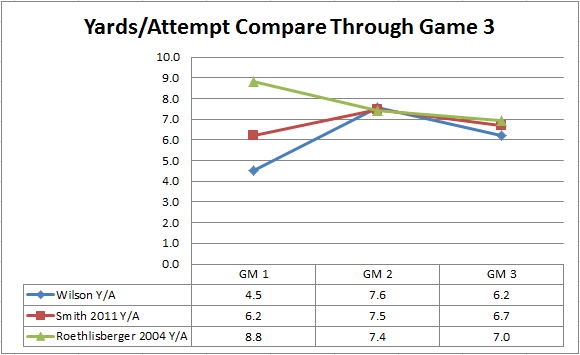 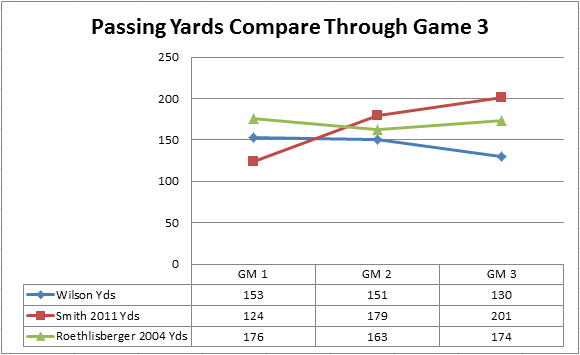 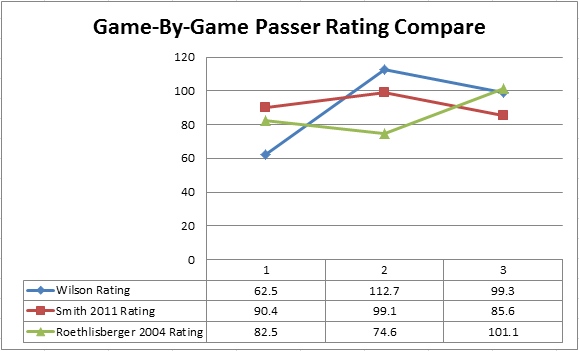 This perspective helps illustrate how much Wilson’s first game has impacted his efficiency numbers. His yards per attempt have been closer to acceptable the last two games, although the Packers game was no great stakes, especially if the final 24-yard pass was removed. His passer rating, however, was stronger than the other players in the second game, and nearly equal to Roethlisberger in the third game. His yardage is dropping. The other two guys were more productive, with Smith making clear steps forward each week.

Let’s see how things progressed for the rest of the season: 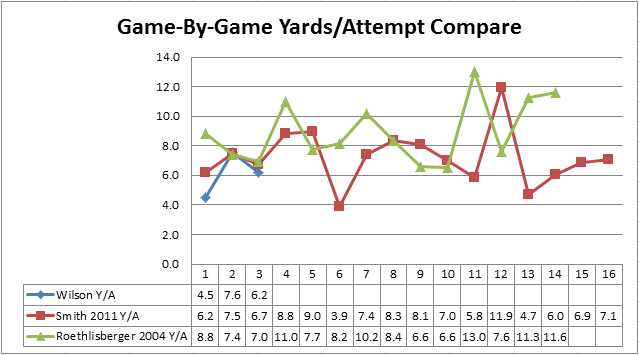 Smith had 11 games when his passer rating was over 85.0, while Roethlisberger had 8 in two fewer starts. Interestingly, all 8 of those games for Roethlisberger were fantastic games with a rating over 100.0. Smith only had four such games. Smith only had three games when he passed for over 250 yards, and just seven when he hit 200 yards or more. Roethlisberger only eclipsed 250 yards once, and only went over 200 yards four times. Again, Wilson will need to step in the yards per attempt department to keep up. Smith went over 7.0 YPA nine times, and Roethlisberger did it in an astonishing 12 of his 14 starts.

Carroll has reason to believe the way his team has played the first three games can result in huge win totals even without a major improvement to the passing game. Where he might have some challenges are finding examples of teams matching this pattern making or winning the Super Bowl. Only the 1990 NY Giants, 2000 Baltimore Ravens and 2005 Pittsburgh Steelers have passed for less than 3000 yards and made a Super Bowl in the last 23 years. The plus side is each of those teams walked away with the Lombardi Trophy.