Search
Home
Uncategorized
Breaking the season up into quarters has proved to be a useful measure of progress. I started this last season, and have referenced it over and over again for my own use. You can find the final 2011 Season Progress Report by clicking here. The report can show trends as the season wears on. You can find the quarter-point progress report here.
Summary Stats +/- 2011 (NFL Rank)
Seattle’s offense has become more balanced as the passing game has stepped forward, while the rushing attack has made some room. Not shown above is that Seattle has attempted fewer rushes in the last four games (34.3 vs. 27.3), while modesty increasing their pass attempts (25 vs. 27.5). The large increase in passing yards is coming from greater efficiency in yards per attempt (5.4 vs 7.7). Before celebrating, Seahawks fans should take note of where the team still ranks in major passing categories. One of the most impressive stats is the decrease in sacks allowed, even while attempting more throws per game and longer throws. The offensive line deserves more credit for the job they are doing in pass protection. The team is averaging the same amount of points despite the increased yardage because 3rd down conversions and red zone efficiency is still lacking. There is reason for optimism on the red zone side as the Seahawks are over 57% in the last three games, which ranks in the Top 15.
The increase in passing has led to more turnovers.There is a strong correlation (0.3) between pass attempts and turnovers for Seattle. The team is averaging 2.2 turnovers/game on the road versus 0.7 at home, a huge part of why the team is 1-3 away from Seattle.
The defense has taken a significant step backwards. The quality of opponent offenses has something to do with it, but the numbers are undeniable. Under-reported is the large decline in rush defense. Much of that was the 49ers game, but teams are regularly getting 80+ yards on the ground now versus around 60 in the first four. Each of the last four teams have had at least 80 yards rushing, when only one of the first four did. Even with the step back on defense, the team ranks in the Top 10 in every category outside of two key ones, 3rd downs and takeaways where they are 27th and 24th, respectively. There is no difference in the team’s ability to take the ball away at home or on the road. In other words, this is a chronic issue for a team that pride’s itself on taking the ball away.
The coaching staff and players deserve a pat on the back for a drastic turnaround in penalties. After nearly challenging the NFL penalty record last season, Seattle was on it’s way to an even worse performance after four games, but have been among the best teams in football the last four games to climb out of the cellar. 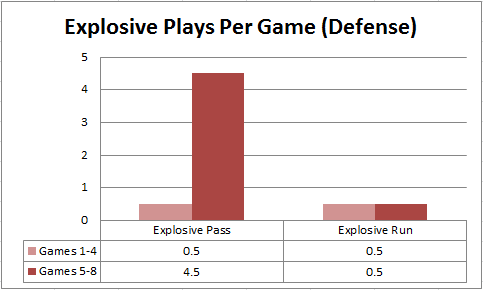 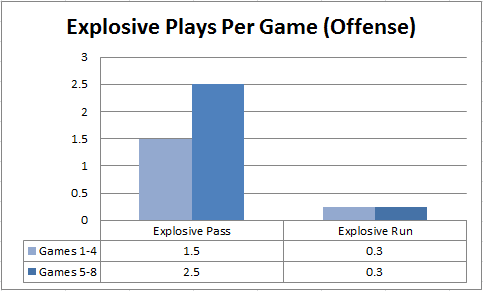 The defense needs to be aware of what is going on here. Facing Tom Brady and Mathew Stafford is part of the explanation for the drastic jump in explosive pass plays, but Aaron Rodgers and Tony Romo were part of the first four games. Allowing an average of five explosive plays per game will not be a winning formula the rest of the way.

The offense has made a modest step forward, adding one additional explosive pass per game.

Seattle went 2-2 in the first four games, and followed that up with another 2-2 performance in the last four. That does not mean they performed the same in both quarters of the season. The charts below will illustrate how different this team has been the last four games, for better or for worse. 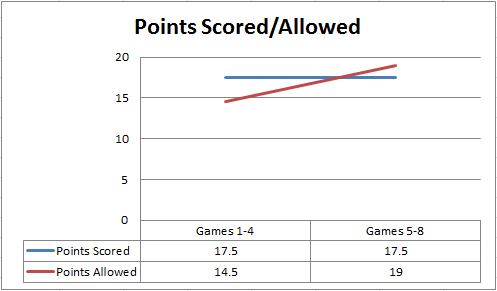 The team has been outscored in the last four games, largely as a result of the offense being stagnant in scoring and the defense sliding back. Allowing 19 points/game would still rank as 8th best in the NFL if the Seahawks had allowed that all year. As much as people want to pile on the defense, they are holding up on the scoring side against the best offenses in the NFL. The offense must pick up the scoring pace. I would also expect the defensive numbers to improve with the second half schedule that features fewer explosive offenses. 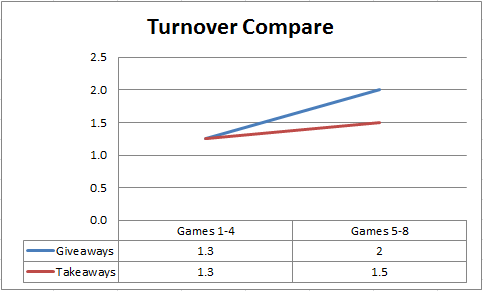 This one is the killer. Giving the ball away twice per game just cannot happen if the team hopes to be in the playoffs. As mentioned above, they are far better at home in that category, but they must find a way to score more and turn the ball over less. The defense showed minor improvements, but needs to be up near 2.0 takeaways/game to be impacting the outcome more often. 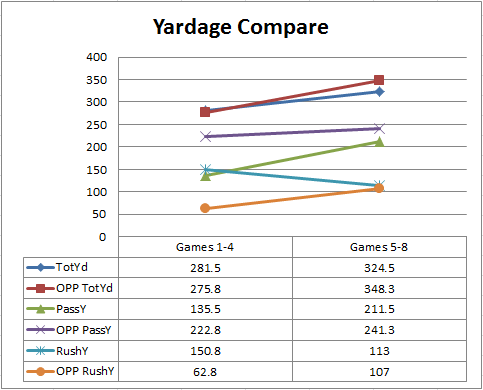 The defense is giving up far more yards the last four games (275 vs. 348), and most of that is due to increased rushing totals. The defense is giving up over 100 yards rushing the past four games. Those three yard runs the team surrendered versus the Patriots and Lions were 0-1 yard runs the first four games. It is unclear if the team is allowing more rushing yards as they try to get after the passer more, but it must be corrected.

The passing game on offense took a major step forward in yardage, but even 211.5 yards/game passing would only be good for 24th in the NFL if they had been there for the season. Improvement is what matters, and the most important thing is to maintain or increase that passing total while reducing interceptions. 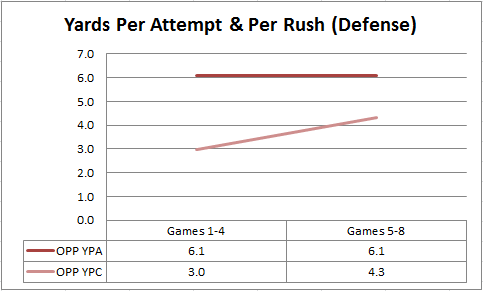 You can see here that the pass defense is actually on point in terms of efficiency. The increased passing yards allowed is completely due to additional attempts by opponents. Again, it is the rush defense that has my attention with a nearly 1.5 yard per carry swing in the last four games. 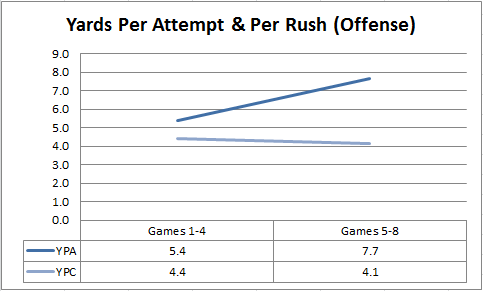 Russell Wilson’s progress is demonstrated no place better than in yards per attempt. Expect that to continue as the team grows. Rushing is a little less effective, and is worth keeping an eye on.

The first half of 2012 has been a mixed bag. There was a dominant defense that became merely very good, and a passing offense that went from pre-natal to elementary school.  The real determining factor will continue to be turnovers. The team is way off pace in those categories. The defense, especially, needs to find a way to be more disruptive and cause bad decisions. We have seen relatively few blitzes the first eight games. I’d expect that to change with more home games and a coaching staff determined to get off the field more often on 3rd downs. Where is the aggressive bandit package blitzing we fell in love with two years ago? Maybe Winston Guy finds more playing time. Maybe not.