Search
Home
Uncategorized
A play that was lost in the shuffle in the last game may be a sign of things to come. Immediately after the 56-yard bomb to Golden Tate was called back, the Seahawks faced a 2nd and 20. This was a hopeless situation for the Seahawks offense in the first four weeks of the season. Darrell Bevell dialed up a new wrinkle, the read option, and the team executed it perfectly for 19 yards. It is a play the Panthers use to great effect with Cam Newton, but is generally considered a gimmick in the NFL. Watch how it unfolded on Sunday.
CLICK ANY IMAGE TO ENLARGE 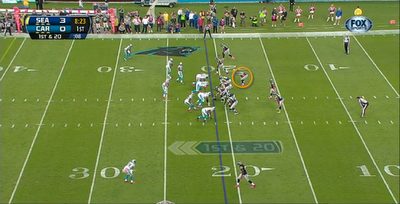 Zach Miller lines up at the top of the formation, before going in motion. He winds up at the bottom, near Russell Okung pre-snap. 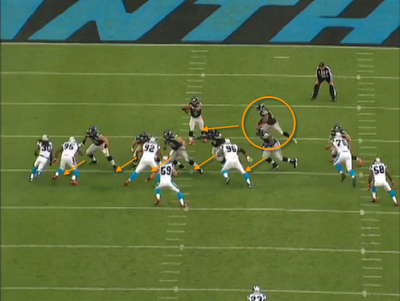 The entire line crashes to their right. Miller is engaged with the right defensive end to the far right of the screen. Marshawn Lynch heads toward Russell Wilson, in what appears to be a standard hand-off from a shotgun formation. 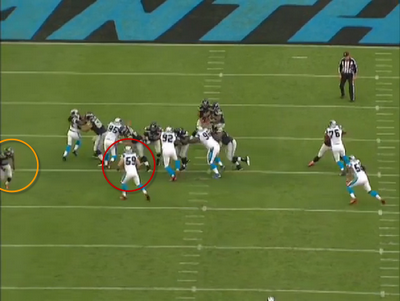 Doug Baldwin gets a clean release off the line from the slot. Luke Keuchly is moving to fill where he believes Lynch will be going, leaving the middle of the field wide open. Note the timing here, where Miller is still engaged with the lineman on the right as if this is a running play. 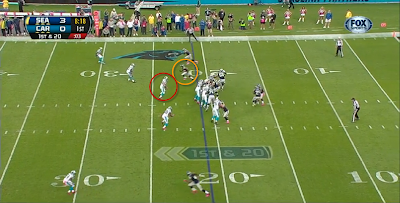 Here’s the same moment from a different angle. Look at the open space behind Kuechly, and how the Panthers entire defense, save one cornerback is above the hash mark, a sign of effective misdirection. 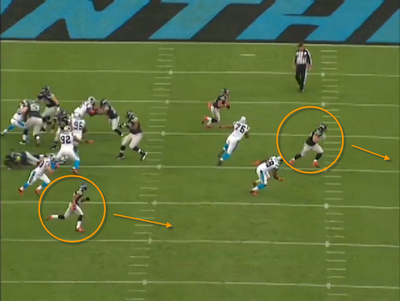 Wilson pulls the ball back and starts rolling to his left. You can now see that Miller has disengaged the lineman, and is releasing into a shallow pattern. Baldwin has continued his route across the field, and Kuechly is having an “Oh shit!” moment to Baldwin’s top-left. 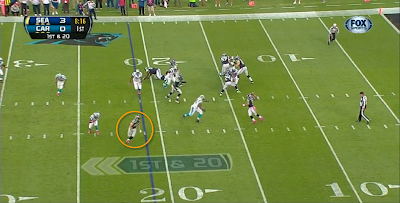 Note that Miller was wide open underneath, but Wilson chose to the deeper receiver. This is a big deal for Wilson, who has been making the conservative choice far too often in his first four weeks. If you watch the play in full speed, you see Wilson make a first read, come off of it and find Baldwin. It was a good sign of progress for Wilson. 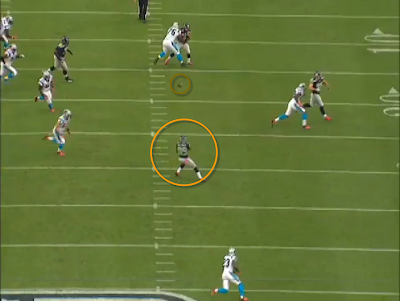 Baldwin is poised to catch the ball with wide open space around him. Some people have asked for Wilson’s receivers to “make plays” for him or get more yards after the catch. That becomes possible when the player’s get the ball in space. Baldwin took this pass for another 10 yards after hauling in the pass.

Defenses will continue to load up against the run when facing the Seahawks. Showing misdirection plays like this will force them to stay disciplined, or risk giving up easy chunks of yards. This is play that puts Wilson in a great position to succeed as he is on the move, outside the pocket, with multiple options, including the possibility of scrambling. It should not be a foundation of the offense, the way it is at University of Oregon, or even as common as it is with the 250 lb Newton in Carolina, but it should be something we see 1-2 times each game.