Everyone knows how challenging it is to succeed as a rookie quarterback in the NFL. Very few have done it. The natural expectation is that a rookie will struggle early, and progress as the season moves along. This would seem especially true with quarterbacks, who are facing defensive sets and talent they have never seen before. Over time, quarterbacks become more familiar with what their opponents are doing, and vice versa. One test of a quarterback is do they start catching up with defenses, or do the defenses catch up to them? Take a look at home each of the current rookie quarterbacks has fared on a month-by-month basis: 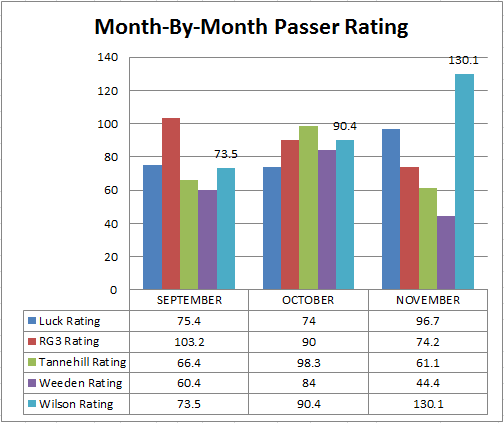 Andrew Luck was largely the same player in September and October, but has really popped in November. Robert Griffin III got off to a flashy start, but has started sliding back. Ryan Tannehill had a great October, but has been largely ineffective the rest of the year. Brandon Weeden had a solid October, but has been poor other than that. Russell Wilson has made steady, and significant, steps forward in each month. He has done this while facing the toughest competition of the five rookies.

The RG3 numbers deserve an asterisk as he has only played one game in November. Still, there is some evidence that NFL defenses are catching up to his style of play. Luck and Wilson are showing signs of catching up to the defenses they are facing, and in some cases, dominating them. Wilson is about to go on the road, where he has not performed as well, for two games against tough defenses. We will check back to see if his progress is sustained after those match-ups. Regardless, his progress to this point is eye-opening.