Football is more than a sport. It is the best reality show on television. Every year, kids from across the country battle with men for the honor of pulling on an NFL jersey. Fame and fortune are the lure for some, but the for the majority that make ~$400K and have careers that only last a few years, it’s about love of the game. Some stars are born, and others are made. This is a series telling the story of one such player, Seahawks Wide Receiver Chris Carter, and his attempt to realize his NFL dream.

Note: Reading the profile of Chris Carter is recommended, but not required to follow along.


***Listen To The Chris Carter Interview***


Chris Carter had been waiting. He had been waiting to be noticed by colleges. He had been waiting to heal from an injury. He had been waiting for an NFL team to sign him, and now he was waiting to enter his first NFL game. The waiting stopped as soon as his cleats hit the field. Excited, but ready, Carter stepped into the huddle and heard his part of the play called, “Zebra Drive.” His first play in an NFL game was coming on a 3rd down with his team trailing, and he was the primary read. San Diego Chargers CB Dante Hughes was matched up on Carter in the slot. Hughes was no rookie, as he has been in the league since 2007. Carter quickly beat Hughes off the line and quarterback Charlie Whitehurst delivered the ball into Carter’s hands on the way to a 13-yard gain and a first down. After all Carter has been through to get to this point, why wait to make an impact?

The very next play was perhaps Carter’s most memorable of the evening. He drove up the seam and Whitehurst again put the ball on Carter’s hands. This time, he bobbled the ball as he twisted between two converging defenders. He adjusted in mid-air and grabbed the ball before he hit the ground for an apparent 20+ yard gain. Officials ruled the pass incomplete. Carter sprained his shoulder on the play as he landed awkwardly, “I guess that’s a lesson about why you should catch the ball the first time,” Carter said later. Pain, or no pain, Carter was certain of the catch and raced over to the sideline to plead his case to Coach Pete Carroll. Carroll seemed almost embarrassed to throw the challenge flag in a pre-season game, but he did it. None of the replays were able to conclusively show the play was a completion, and so the ruling stood. His coaches and teammates were able to later confirm the catch during film study.

The team continued the drive down the field for what was eventually a game-tying field goal. Carter later helped Quarterback Josh Portis settle down with his first NFL completion on a simple 8-yard out. That drive ended in a game-tying touchdown. Carter is the guy who doesn’t flash on your screen as the biggest or fastest player out there, but he is almost always open, almost always makes the catch, and appears to have an uncanny knack to contribute to point-producing drives. He is more Bobby Engram than Wes Welker. Players like that don’t make the front of the sports page too often, but they are crucial parts of winning teams. 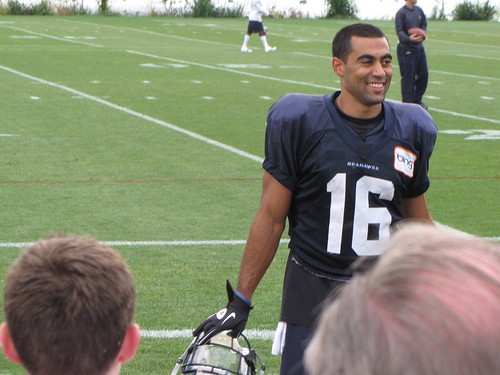 Being a solid role player, though, won’t be enough to make this Seahawks squad. Competition in the receiver corps is fierce. Doug Baldwin has been getting a bunch of reps in camp and led the team with four receptions in the Chargers game. Ricardo Lockette also had a nice game with a 16-yard catch. Receiving is only one part of the equation. Special teams is where players make, or break, their chances of sticking on the roster.

Baldwin had a 41-yard kickoff return and a 20-yard punt return. Carter did not get any special teams snaps. He knows that’s not good. His shoulder injury impacted his availability, but nobody will care about that when it comes down to cut time. He is getting some more chances on special teams in practice this week, and will have to find a niche somewhere if he has any real hope of making the cut.

Coaches clearly see something in Carter. Players, including other wide receivers, are getting cut multiple times per week. If the coaching staff did not see something in Carter that they liked, he’d already be on his way out of town. The practice squad is not something Carter wants to think about, but it may be his best opportunity to break into the league. A number of successful NFL players have started out that way.

Finding a way to make another strong impression will be tougher this week. Starters played only one series in the first game, leaving ample time for 2nd and 3rd string players to get on the field. Starters will play the entire first half this week, which means opportunities for the other guys will at least be cut in half. Carter may only see a few minutes in the 4th quarter. He will be waiting again, but it only takes a moment to make an impact.

Alternatively, here are instructions to subscribe manually in iTunes:

If you’d like to copy it to your iPod/iPhone, you’ll need to access the click on your device in iTunes once you connect it to the computer, and access the Podcasts tab. The rest should be pretty clear.