Pete Carroll is not like other coaches. Seahawks fans have already noticed decisions on the field and in the front office that are unconventional. Behind these moves is a philosophy Carroll has developed over a life time of struggle and success with the game of football. Carroll reveals the underpinnings of his philosophy in his book “Win Forever: Live, Work, and Play Like a Champion,” and provides valuable insight to any Seahawks fan who wants to anticipate what may come next. 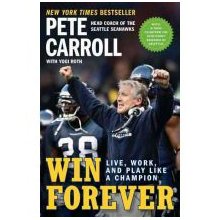 Scott Enyeart suggested I read Carroll’s book last season to better understand the man behind the moves. I chose to buy the audio version that I could listen to on my commute everyday. Carroll actually reads the book, so you even get to hear his inflection and tone. The book was enjoyable and instructive. I regularly refer to it when trying to think along with the Seahawks coach.

Carroll and the Penguin Group recently released the paperback version, and added a whole chapter on his first season in Seattle. They gave me some copies, and I’m going to give them away to my readers. Here’s how it will work:

I will give away one book after every pre-season game to the person who most closely predicts the final score of the game (e.g., how many points each specific team scores). If there is a tie, I will send an email to the participants who tied with a tiebreaker question, and then declare the winner. If, at any time, contestants become obnoxious and annoying about what should be a care-free contest, I will just end it. Let’s keep it light-hearted, folks!


Instructions:
1) Send an email to [email protected] before kickoff of each pre-season game with the subject line: “Hawk Blogger Book Giveaway: My predicted score – Seahawks XX Opponent XX”
2) In the body of the email, include a prediction for which Seahawk will lead the team in rushing, and how many rushing yards that person will have.

I will announce the winner prior to the following Seahawks game. There will be four winners in all.