Defensive backs take part of their traditional pregame huddle before taking the field for warmups.
Most fans want their team to either be drafting at the very top of the draft board, or at the very bottom. Teams at the top get the chance to make franchise-defining selections, while teams at the bottom already have championship-caliber teams. Picking in the middle of the pack would appear, at the surface, to be the worst-case scenario. It indicates the team is mediocre, and the chance to find a franchise player is diminished since so many teams select beforehand. Research, however, indicates that there may be no better place to find elite talent than between picks #11-15 in the first round.

More First-Team All-Pro players have been selected in the middle of the first round than any other grouping of picks in the eleven drafts held since 2001.

A player that makes the First-Team of the All-Pro squad is the best of the best. Check out the names. They should be familiar. 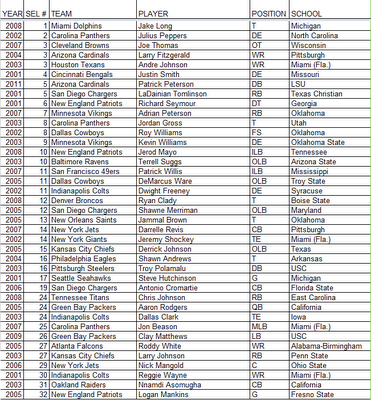 Notice the number of elite linebackers and pass rushers selected between picks 11-15. Seattle would obviously be ecstatic to have that trend continue in 2012. Trading back has come up as an option multiple times, but the data does not support making that move. A full 61% of these All-Pro players were selected in the first half of the first round. That’s not to say it is impossible to find elite talent later, but the probability drops drastically. Looking at the first-team of the All-Pro squad is instructive, but there are other ways to evaluate where a team can find elite talent.

For example, there are guys like Shawn Andrews, Jamaal Brown, and Jeremy Shockey that had a great season to make the team, but might not be true franchise talents. Making the first-team two times or more certainly lessens the chances that the player is a great-but-not-elite talent.

That means 80% of these franchise-level players were selected in the first-half of the first round. It also again shows that the best place to find these players is not picks 1-5 or 6-10, but picks 11-15. All-Pro selections tends to be a better measure of elite talent than Pro Bowl selections for a variety of reasons, but it is worth checking out the Pro Bowl talent as well to see if the tend continues.

Making one Pro Bowl does not make a player an elite talent. Even making two can mean “good, not great.” The following is a list of players that have made three or more Pro Bowls that we drafted in 2001 or later. Clearly, this eliminates potentially elite players that were drafted in the last two seasons. 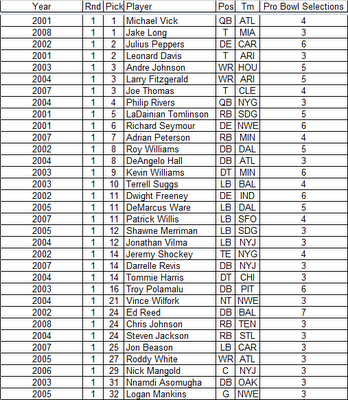 There are a few players on that list that probably do not belong in the conversation for elite talent (e.g., Leonard Davis), but the vast majority would be considered franchise-level players.

There is little question that picking from 11-15 is a premium draft position to find elite talent. Why this is the case is far more open to debate. Many teams choosing in the Top 10 are targeting players with higher ceilings that often come with higher risks. They are also commonly after quarterbacks, a notoriously hard position to project. The desire to add specific types of talent (e.g., quarterbacks, left tackles, etc.) can push players farther up the draft board, and allow higher quality players to slide down. The ingredients necessary to create another situation like this in the upcoming 2012 draft seem to be in place. Two quarterbacks are being taken up top. Another quarterback, of questionable qualifications, is being pushed up the draft board into the Top 10 by many accounts. A franchise running back is there to be had, as are a few high profile wide receivers with a few Top 10 teams in need of a playmaker. That is why teams could see players like Melvin Ingram, Luke Kuechly, Quinton Coples and others who arguably have Top 10 talent slide past the tenth pick. One or more teams drafting between picks 11-15 is likely to add a franchise player, and it probably will be a linebacker or defensive end that can rush the passer.