the soccer stadium with the bright lights
Breaking the season up into quarters has proved to be a useful measure of progress. I started this last season, and have referenced it over and over again for my own use. You can find the final 2011 Season Progress Report by clicking here. The report can show trends as the season wears on. You can find the 2012 quarter-point progress report here, mid-season progress report here, and the three-quarter report here.
Summary Stats +/- 2012 (NFL Rank)
Not a lot to criticize in these numbers. It is telling that the improvement is across the board. There have been stretches when the offense has stepped forward and the defense has stepped back, and vice versa. This four game stretch saw all units move ahead. The NFL rankings are of particular interest. Seattle is in the Top 10 for most rankings across offense and defense. They are Top 5 in eight categories, four each in defense and offense. It is hard to find fault in a team that is improving in key areas like third-down conversions, red zone scoring, passer rating, scoring, giveaways, takeaways, opponent third-down conversions, opponent red zone scoring, opponent passer rating and opponent scoring.
If you want to pick nits, the opponent yards per carry has not improved and the sacks are down. You will see later why the rushing defense is actually among the most improved aspects of the team. The pass pressure is a concern, but how can you argue with the results? 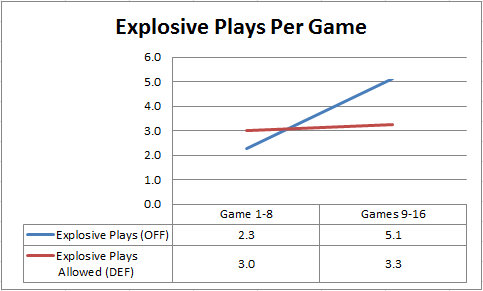 I have these numbers broken out into quarters of the season, but sometimes it is most useful to just see the bigger picture. This offense is essentially twice as explosive in the last eight games as it was in the first eight while the defense has remained relatively steady. The Seahawks are more likely to have an explosive play in any given game than their opponent. That is possibly the biggest change since the season opened.

Seattle went 2-2 in the first four games, 2-2 in their next four, and then finally broke the pattern with a 3-1 record in the third quarter of the season. They finished with a 4-0 stretch. The way they did it looks very different than the way this team won early in the year. The charts below will illustrate how different this team has been the last 4-8 games, for better or for worse. 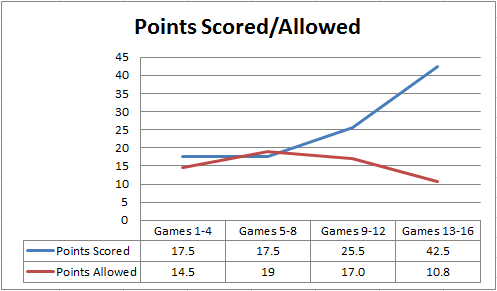 Um…wow.  We all lived through it, but this visual explains the Seahawks evolution better than words ever could. I continue to hear people talk about this offense being good, but holding back from comparing it to the Patriots, Packers and alike. This is not a one, two, or even four game trend. 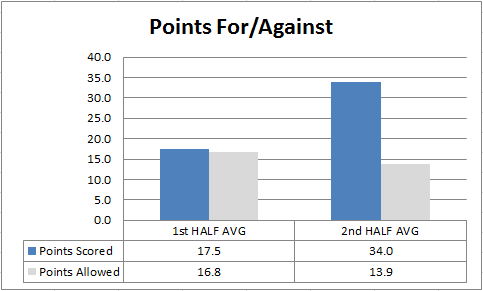 The Seahawks averaged 34 ppg in the second half of this season. That is elite production no matter how you cut it. Did the defense score a couple times? Yep, but they do for the Patriots, Packers and others as well. This offense has been lethal, and the defense has benefited. 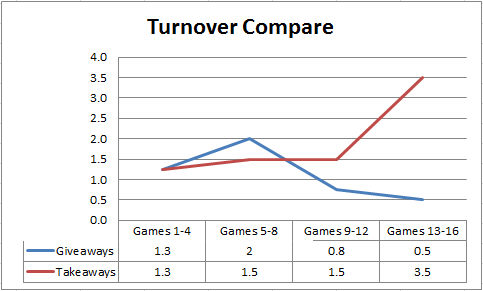 Getting takeaways is something that can be influenced, but not often controlled. Protecting the ball is far more something that a team can have a direct effect on. Seattle has made huge strides here, largely due to their quarterback finding his footing and getting back to his college habits of ball control. Teams will have trouble beating the Seahawks if this trend continues. 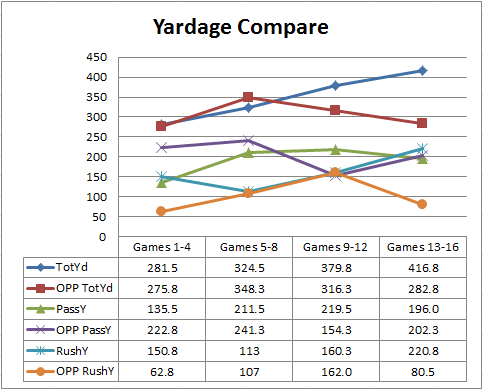 I admit this one is too much in one chart, but it saved me 10 minutes that I can spend on other things, so use your brain power and follow along please. Take the top two lines. You can see the steady growth in the offensive yardage totals and the steady decrease in the opponents yardage totals. There appears to be an almost linear correlation. One could argue there is a finite amount of yardage to be gained in any game. There is, after all, a time limit. Seattle is increasingly getting the lion’s share of that yardage. The bottom two lines (light blue and orange), tell a big part of that story. The Seahawks rushing totals have gone through the roof. They are now gaining more yardage on the ground than through the air, at least in the last four games. Equally as important is the downward trend in opponent rushing yards. Some of that is due to Seattle getting out to early leads, but you will see in the yards per carry later that the team is recovering there as well. 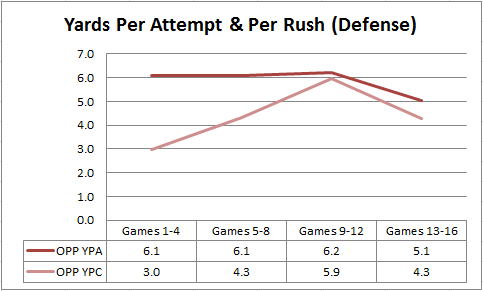 Things had gotten out of control in the opponent rushing game. Giving up nearly six yards per carry was atrocious. The team showed they were getting a handle on it these last four games, and that included an outing where C.J. Spiller and Buffalo were over five yards per carry. They shut down one of the top rushing attacks in football in San Francisco, and bottled up Steven Jackson again. The yards per attempt is wacky good. The total yards per play for opponents has returned to the 4.8 it was at the first four games when they were being talked about as elite. 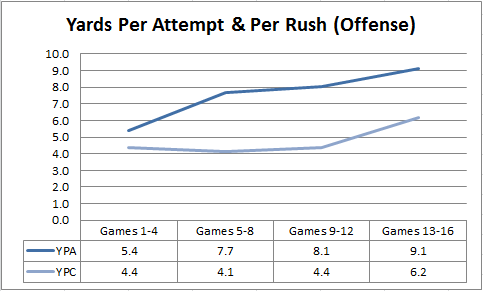 The team that led the NFL in yards per attempt finished at 7.7. Seattle is making that look foolish the last half of the season, and now they are blowing out the yards per carry number as well. This offense is a handful.

I have been a fan of the Seahawks for 30+ years, and have never witnessed a team demonstrate this kind of growth in a single season. These are the kinds of statistics you draw up if you are charting your Madden franchise. Teams do not double their scoring output from one half of the season to the other. They do not average almost a first down every pass attempt for a quarter of a season. They do not combine the offensive fireworks with a defense that is pouring cold water on opponent’s matches. This is the best team in football. That does not mean they will win even a single playoff game. Teams lose to lesser opponents all the time, especially on the road. Should that happen to Seattle, do not make mistake of thinking any of this was a mirage. Seattle put this season together against one of the toughest schedules in the NFL, and will absolutely enter next season as one of the top contenders for the Super Bowl no matter what happens in these playoffs.

That said, this team has already shown their disdain for the typical growth chart. Why put off for tomorrow what you can do today? What a fantastic season this has been. We cheer each week for the opportunity to see this team play one more game.

The Morning After: A day of reckoning for Pete Carroll & Russell Wilson