The debate about which rookie quarterback deserves to be the front-runner for the NFL Offensive Rookie of the Year is heating up. Russell Wilson, Andrew Luck, and Robert Griffin III each are playing at a high level, and have their teams in playoff contention. Their paths to getting there have been quite different. The following is an updated look at the emerging strengths and weaknesses of each player. Different voters will emphasize different areas of performance. A strong case can be made for each player.

First, take a look at how each has performed cumulatively to this point.

Luck is throwing far more often, for far higher yardage totals. Griffin and Wilson are throwing less often, but are far more efficient with their throws. Wilson leads the trio in touchdowns despite having the fewest pass attempts. Griffin stands out with his completion rate and lack of interceptions.

The problem with cumulative stats is that they give no color to trends. A rookie player will often show signs of improvement over the course of the year. Wilson, for example, is a completely different player now than he was when the season began. 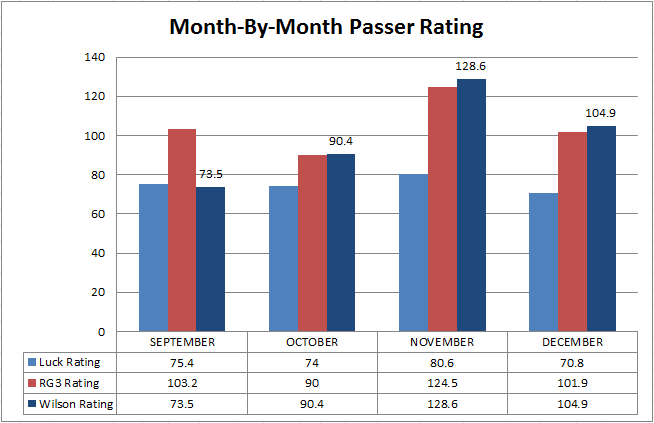 There has been only one December game thus far, but the trend is clear for a player like Wilson. He is the highest-rated passer in the NFL over the last six games. Griffin has remained consistently strong, and Luck, surprisingly, has made only modest gains. Luck, though, is being asked to do more. 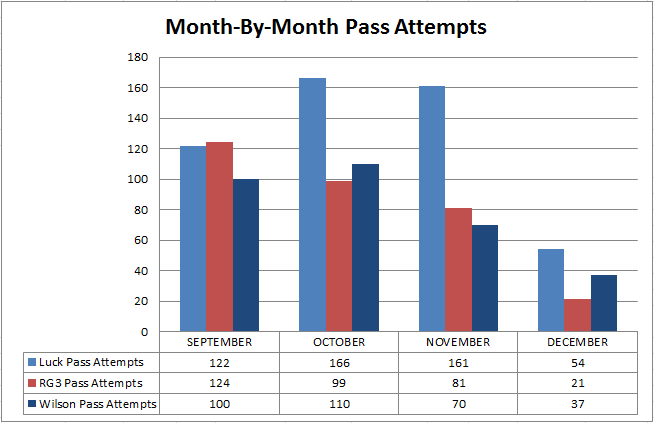 Wilson and Griffin have continued to pass at roughly half the rate of Luck the past two months. Wilson had his most ambitious passing day this past weekend in Chicago with those 37 attempts. Griffin has attempted more than 37 passes once on the year, when he threw 39 against Carolina and finished with his second-worst passer rating on the season at 74.2. In fact, Griffin’s number plummet when he gets over 30 pass attempts in a game. His rating goes to 71.0 on those throws. Wilson boasts a 130.0 rating in those situations, and Luck is right around his normal range with a 72.4 rating.

There are different ways to look at how much a team is asking of their quarterback. We have heard some local analysts mention that Wilson is only throwing 4-5 passes over a certain distance in any given game. The implication is that he is not being asked to make harder throws down-field. The better way to look at that is deep throws as a percentage of pass attempts.

I chose to define deep throws as those traveling more than twenty yards in the air. By this measure, Wilson is neck-and-neck with Luck. Griffin is a distant third. Another way to look at this is that 92% of Griffin’s passes are traveling less than 20 yards in the air. These numbers are not available over time, but those watching Seahawks games know that deep throws were nearly absent the first few games of the year, but are now a staple. I don’t have the same insight for Luck or Griffin.

Situational play can separate the good from the great. There is a reason coaches dedicate time in practice to red zone, two minute drills and 3rd downs.

Griffin shines in these situational moments, although it is important to remember his rating is far higher overall. The better question may be how the player performs in these situations relative to his overall performance. In other words, does he rise to the occasion, or shrink under pressure? Luck’s overall passer rating is 76.1. He appears to be at his best in close games late. The best evidence of that is his eye-opening five game-winning drives in only twelve starts. Griffin’s overall rating is 104.4. Despite having the highest rating in these situations, you can see he only steps up his performance in the red zone. His play drops considerably in the other moments. His two game-winning drives is still impressive for a rookie. Wilson’s overall rating is 95.2. He excels in the red zone and the 4th quarter, and also has a terrific three game-winning drives. He would have had four if the Seahawks defense had not allowed Detroit to score at the end of the 4th quarter.

Trends are crucial here as well, and these numbers are not easily attainable over time. Wilson’s 3rd down rating and red zone rating were below 50.0 after four games. He has been among the best quarterbacks in the game in those situations since that time.

These players have compiled these numbers against different schedules. Football Outsiders creates statistical rankings for teams that includes a strength of schedule component. They rate Seattle’s schedule as the 3rd toughest in the NFL so far, Indianapolis’ schedule as 26th, and the Redskins as 15th. To add a little more context, let’s take a look at how many times each of these players has faced a Top 10 NFL defense. We will look at the Top 10 defenses in terms of yards allowed, and also the Top 10 in opponent passer rating.

This provides more detail about which top defenses each player faced, whether the game was on the road or at home, and the raw numbers against those teams. Again, Luck is being asked to carry his team in these games, and is still managing over 300 yards per game. His touchdown-to-interception ratio, however, is way off.

Another important way to compare and contrast these three terrific rookies is how they play against similar opponents. ESPN’s Mike Sando did a terrific comparison of Luck and Wilson’s performance against their seven shared opponents. Wilson’s rating was 115.6 against these teams versus Luck’s rating of 74.9. ESPN has their own quarterback rating system, called QBR, and Wilson registered an 81.6 QBR versus Luck’s 68.2. Wilson finished with a 5-2 record against these seven opponents. Luck finished 4-3.

Wilson and Griffin have played four shared opponents: Carolina, Dallas, Minnesota, and St. Louis. The comparison is tougher here for Wilson, as he played his worst game of the year at St. Louis. Griffin has a 97 rating against these teams versus Wilson’s 81.2. Wilson’s record is 3-1 against those opponents, and Griffin is 2-2.

One last part to factor in is these players ability to run the football. Griffin may have passed for nearly 1000 fewer yards than Luck, but he has set the NFL rookie rushing mark for a quarterback with over 700 yards on the ground and six touchdowns. Wilson has close to 300 yards rushing, and has been picking up that part of his game considerably in the last month with his team doing more read-option. Luck checks in at just over 200 yards rushing.

An Impossible Choice
Griffin’s production in the running game, to go along with his sterling passer rating make him a logical front-runner for the rookie of the year award. His lack of deep throws, poor performance against great defenses, and poor strength of schedule give me pause. His tendency to under-perform, relative to his normal levels, in key situations also is a concern. Luck is being asked to shoulder the biggest load, and has led his team to the most wins, but he also has faced one of the the weakest schedules in all of the NFL. His efficiency is mediocre, with his interception rate being anything but special. It is hard to tell whether he is playing unbelievable football, or is just a strong rookie that is getting to throw the ball 40+ times each game. His strongest case may be his five game-winning drives. That is truly stunning.

Wilson has a little bit of everything to offer. He has put up sparkling numbers against one of the toughest schedules in football. He has faced a Top 10 defense in nearly half of his games, and still is the 7th rated passer in the game, and tops in the last half of the season. His situational play is strong, and he has led his team to three game-winning drives. He is starting to be a threat in the running game, in a similar way that Griffin does it. His performance against shared opponents with Luck says a lot.

The one thing that is certain is that anyone who says these three players are not all deserving of first-place votes for rookie of the year is wrong. How each finish the season will be paramount, as will the way their teams finish.