There is no shortage of discussion about how to stop Robert Griffin III, Alfred Morris, and the Shanahan’s read option and pistol offense. A key aspect of this game that is getting far less attention is how the Redskins defense will stop a similar offense with Russell Wilson at the helm, Marshawn Lynch running behind him, and two Pro Bowl offensive lineman clearing the way. I spent some time looking for film on how the Redskins may perform against an offense like this, and found only the game they played in Week 9 against the Carolina Panthers at home. The outcome was a 21-13 loss, and Washington’s struggles against the read option was a big reason why the team lost.

Three plays in the first quarter illustrated the challenges Washington faced. The plays happened consecutively on the same drive, and resulted in 57 yards and a touchdown. The first saw Jonathan Stewart go around right end for 17 yards.

NOTE: All images/clips can be enlarged by clicking on them

And here it is from the end zone angle…

The very next play, the Panthers kept with the read option and the Redskins stayed with their nickel defense. Again, there were only six players in the box. This time, the end crashes down after the back, and Cam Newton keeps it for another 10 yards.

The Panthers saw no reason to change things up, and apparently, neither did the Skins. The next play was the same defensive look, and this time, DeAngelo Williams breaks through nearly untouched for a 30 yard touchdown.

And from the end zone angle…

Here is a still right at the moment when Newton is making his read. You can see the Redskins end staying home to guard against another Newton keeper. You can also see a gaping hole on the right side where Williams eventually breaks it. 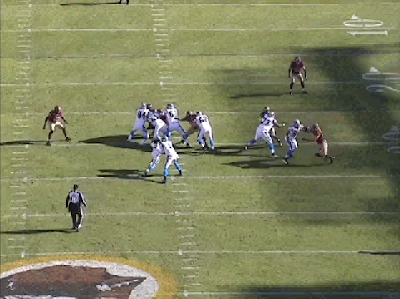 These were just three plays. I asked Mike Sando, of ESPN, if he had any data on the Redskins success against the read option all year.

@hawkblogger Gave up 94 yards on 10 such plays according to @espnstatsinfo. Not many plays to go on over course of full season.
— Mike Sando, ESPN.com (@espn_nfcwest) January 2, 2013

All of those 10 plays came against Carolina. You may be thinking, “that was 57 yards on three plays, so what’s the big deal?” Well, that means they surrendered 37 yards on the 7 other read option plays for an average gain of 5.3 yards. That ain’t good either. The Redskins could very well have spent time improving how they play this type of offense since that game a while back, but you can be sure Seattle will test them, and the Seahawks very well may be better at running it and more dangerous than the Panthers. It will be interesting to see which offense NFL fans will be talking about Monday morning.