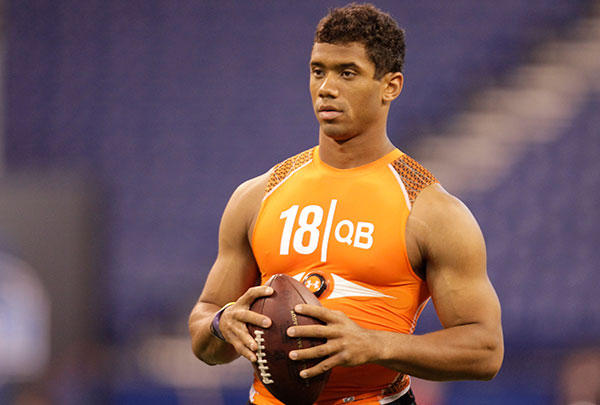 They did it. The Seattle Seahawks swallowed their pride and honored the deadline set by their quarterback. Russell Wilson took a reasonable deal for a player of his caliber, position, and age, without demanding league-altering mechanics like tying his salary to a percentage of the salary cap. Perhaps more importantly, Wilson made it clear that he wants to stay in Seattle and the Seahawks proved they want him to stay. Celebrate, Seattle. You get to enjoy one of the best players in the NFL for at least the next five years, and the tireless rumors of disharmony may finally rest in peace.

More was settled than many may realize when Wilson signed his new 4 year, $140M extension with $107M guaranteed. This was a pivotal moment in the relationship for the Seahawks and Wilson. It was also a crossroads for how the team was going to approach roster construction.

Through door number one: go all-in on Wilson. Pay him what he has earned. Build around him, primarily through the draft. Make this truly his team.

Through door number two: part ways with Wilson. Get a bushel of picks in return. Look to build a more balanced and complete roster with a less costly QB, either through the draft of a veteran free agent.

While it might be an obvious choice to most, door number two more aligns with Pete Carroll’s philosophy on roster building. He is wary of being too reliant on any one player. I will even admit there was a part of me that was attracted to the notion of reloading through the draft. Less because I thought it was the right thing to do, and more because of the intrigue.

Can you imagine how many seventh round picks the Seahawks would have ended up with if John Schneider started a draft with three first round picks?

Instead, you have Wilson tied to Seattle until he is 35-years-old. Very few franchise quarterbacks change teams. Even fewer change after their mid-30s. Peyton Manning is one who did very late in his career, but it took a serious injury to make him available.

There will be those who try to paint this extension as a certainty that was always going to happen. History may be written that way by some. Not here. The team seriously considered taking the alternate route. Even Wilson acknowledged it somewhat by requesting a no-trade clause in his new deal. Reports are that was the clinching factor in coming to an agreement.

These two sides are no longer two sides. They are bound as one. The dynamic will be different. Wilson detractors in the organization are either gone or going. His contract now extends beyond either John Schneider or Pete Carroll’s deals. He is now the nucleus around which everything else in the organization will be built.

There is reason to believe he on the ascent, and ready to handle that additional weight. He set personal bests in touchdown passes, passer rating, and tied a career-low in interceptions last season despite endless sniping around how the team utilized him. His connection with Tyler Lockett was the best of any QB/WR combo in the league. He has the best left tackle of his career anchoring what should be a more reliable offensive line. And he has a wonderful stable of running backs to compliment him.

There continue to be signs that the Seahawks will rely far more on passing to their backs than they did a year ago. It is arguably the most talented position group on the roster. There is a thin receiving corps, that may be getting thinner. Two of the backs have played wide receiver before, and Chris Carson is a blur and a brute in space. Brian Schottenheimer is often maddeningly conservative. Short passes to running backs in space makes all the sense in the world.

The irony would be even thicker if this new era of Seahawks football centered around a respectful and symbiotic relationship between the running backs and Wilson given the history of where things were when the Seahawks rose to contention years ago.

The idea that the team must change how they play to justify the cost of Wilson’s deal is simply not true. Carroll and Schneider paid what was required to keep a great player who fit perfectly with the way they want to play. There will absolutely be more passing next year than there was last season, but that will be because they were forced to be even more conservative last year due to a variety of factors, not because they are paying Wilson more money.

The offensive line struggled mightily in pass protection. Wilson set a career high in sacks despite far fewer pass attempts. Doug Baldwin, the centerpiece of their passing attack, was badly injured and unable to perform to his standards. Schottenheimer was new and had not acclimated to all his players or his quarterback. All those question marks meant the team was more than happy to embrace what became a clear and repeatable strength in the running game.

There has been so much criticism of the Seahawks offensive approach last season on Twitter that it would be easy to forget they led the NFL in rushing a year after being a historically bad rushing team. They also were one of the highest-scoring offenses in the league.

Now, we will get the pleasure of seeing a more confident and relaxed organization swing the pendulum back toward balance with more passing while keeping the run game as their touchstone. There is reason to believe this will be Wilson’s best season.

Attention now turns to how the team should handle their next set of stars headed into the last year of their deals. Bobby Wagner and Frank Clark get most of the press, but Jarran Reed is arguably the most important of the three.

Reed is 26-years-old and was the incredibly rare double-digit sack producer at defensive tackle. He is a vocal leader on the team that shows no signs of changing his mindset when he gets paid, and he has proven to be durable. He also showed up to the VMAC yesterday for offseason workouts unlike Clark.

If I am Schneider and Carroll, I start with him. Get him locked up. Move on to Wagner. See what the draft brings and be willing to play chicken with Clark. Dominoes should start falling now that Wilson has been locked up.

We all owe Wilson a debt of gratitude for setting a deadline that freed us of the endless speculation and backbiting. Carroll and Schneider are responsible for drafting, starting, developing, and retaining Wilson. They deserve gratitude and respect for navigating a scenario far more complex than most realize.

Finally, Jody Allen has been a question mark until now. There were whispers that the Seahawks might be hamstrung by their new ownership situation after Paul Allen passed away. Allen has set those rumors to rest by approving the richest contract in the history of the NFL. She deserves thanks as well.

The hope here is this marks the moment where posturing and preening turns to gratitude and earnest development of a new championship core. The Seahawks and Russell Wilson are one. Very few teams can argue they will be better equipped at the most important position on the field for the next five seasons. No three men will be more motivated to prove they can win another Super Bowl together than Wilson, Carroll, and Schneider.

It is going to take expert drafting, coaching, player development, and MVP-level play from Wilson. All things this trio has proven they can do. Take a break from sowing seeds of doubt. Embrace what will certainly be remembered as a golden era of Seahawks football.